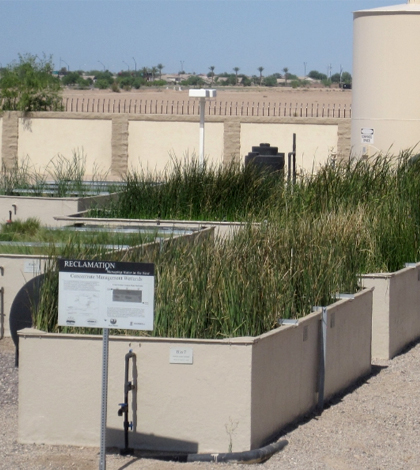 A treatment for brackish water using constructed wetlands in Goodyear, Ariz., has proven effective, according to a release from CH2M Hill. The company has been working with the city and the U.S. Bureau of Reclamation since 2007 on the project looking to filter reverse osmosis concentrate.

Reverse osmosis concentrate is what’s left over after a water treatment plant uses the process to clean water. It contains such constituents as arsenic, selenium and nitrates. For the City of Goodyear, removing the concentrate is important so that the water left over can safely be deposited into the Gila River.

After a few preliminary studies, CH2M and the Bureau of Reclamation designed a pilot-scale wetlands facility at the city’s Bullard Water Campus which revealed that constructed wetlands can effectively reduce contaminants found in the concentrate. The find opens the door for more water reuse options in other inland communities.

Managing reverse osmosis concentrate is particularly challenging for inland communities where discharging to the ocean isn’t available. More alternative approaches like using constructed wetlands will likely be needed in the future as the world is continually challenged with water scarcity.

Results of the project demonstrate that a management and disposal approach using natural treatment systems like constructed wetlands can be effective for reducing volume and contaminants in reverse osmosis concentrate.