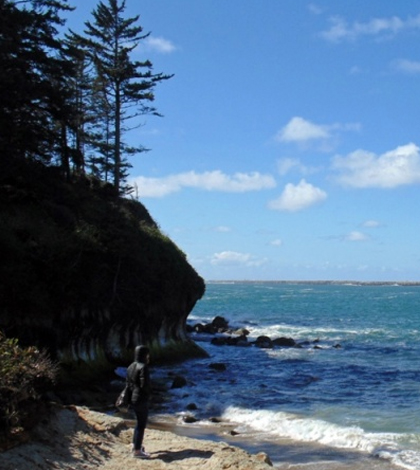 U. Of Oregon researchers studied hypoxia in the 15-mile stretch of the Coos Bay ship channel, from where it meets the ocean, shown, to the mouth of the Coos River. (Credit: University of Oregon)

Many studies into water’s circulation around the Oregon coastline look into the dynamics of the Columbia River. After all, it is the largest river in the Pacific Northwest. But few investigations consider the smaller bays and estuaries at work. This includes Coos Bay which, despite its less popular status as a setting for research, is still a very interesting system.

The bay is the deepest estuary on the Oregon coast with a main channel that is routinely dredged while other areas of the bay don’t get any such treatment. That in part brings up a lot of interesting questions about Coos Bay and researchers at the University of Oregon were keen to learn more about its circulation when they first embarked on a recent study into its waters. But after some tweaking, their approach shifted to a focus more on the bay’s dissolved oxygen levels.

“The weather in the Pacific Northwest, there are two seasons: wet and dry. In the wet season, there’s more discharge. In the summer, that shuts off,” said Dave Sutherland, assistant professor of geological sciences at the university. “To understand the seasonal changes, we wanted to look at changes in circulation and what does that mean for biological changes. We used dissolved oxygen as a proxy.”

Collecting data for the study involved using a CTD (conductivity, temperature, depth) profiling instrument around the bay. Its salinity and pressure measurements helped to inform knowledge of the bay’s density, which can impact circulation. This sensor also had an integrated oxygen probe, which was complemented by a turbidity sensor and fluorometer which scientists used to track levels of chlorophyll-a, an algae indicator.

Additional data from the Coos Bay Water Quality Monitoring Network, mostly collected by YSI EXO2 and 6600 V2 water quality sondes, were used to gauge the bay’s conditions at sites around its perimeter. These gleaned information on dissolved oxygen, pH, turbidity, chlorophyll and depth at 15-minute timescales. Stations in the network are maintained with help from different local organizations, including the South Slough National Estuarine Research Reserve, the Partnership for Coastal Watersheds and the Coos Watershed Association. Pulling it all together, Sutherland was able to note some intriguing insights into the shifting levels of dissolved oxygen in Coos Bay. While oxygen levels fall to their lowest in the bay in late summer, its physical factors combine to prevent hypoxic conditions that can harm aquatic life.

That was a surprise, he says, but notes that dissolved oxygen levels in the dredged part of the bay do go down. It’s just that they don’t go down as much as more shallow areas.

“It must be that the coastal water entering the bay isn’t hypoxic. I think they still have hypoxic zones far away from the mouth of the bay, but the coastal signal is not hypoxic,” said Sutherland. “So if you’re a salmon, it’s probably low enough to care. But if you’re something like a crab, it doesn’t matter that much.”

The nearby Coos River, which discharges into the bay, is joined by a number of smaller streams and doesn’t appear to have as much effect on dissolved oxygen levels as coastal waters coming in. And in all, the bay’s levels are relatively stable when compared to other estuaries around the coast of Oregon that are afflicted with low-oxygen conditions during summer time.

The findings help scientists have an informed understanding of how Coos Bay works when the seasons change, so they are useful in the short term. But Sutherland has more of a big-picture view for what they may mean in the future.

“We see it as a baseline for knowledge and thinking about future changes. It’d be nice to know what it’s like today if conditions favorable to hypoxia develop,” said Sutherland. “If we ever need to look back 50 years from now, we’ll have a baseline. We know this is what’s going on today and now we can look at what’s going to change in the future.”

Full results of the research are published in the journal Estuarine, Coastal and Shelf Science. Support for the work was provided by the university’s Environmental Science Institute, the National Science Foundation, Oregon Sea Grant and the Oregon Legislature.

Top image: U. Of Oregon researchers studied hypoxia in the 15-mile stretch of the Coos Bay ship channel, from where it meets the ocean, shown, to the mouth of the Coos River. (Credit: University of Oregon)