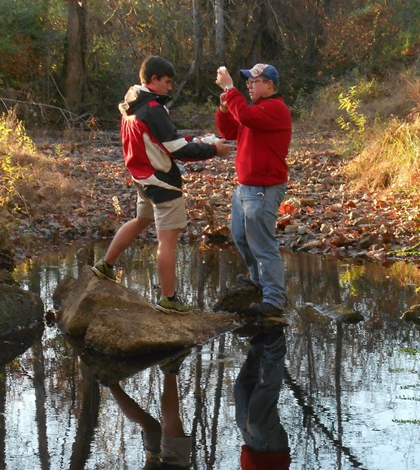 Coosa River Basin Initiative, also known as CRBI, is a grassroots environmental protection organization that works with volunteers to protect and preserve the Coosa River in Rome, Georgia and the surrounding cities. CRBI is a member of the Georgia Water Coalition and the Waterkeeper Alliance.

You may be wondering what is so special about the Coosa River. The answer is just about everything. The river is a vital part of the communities surrounding it.

“Every river is important but the Coosa River is important in several unique ways,” said Jesse Demonbruen-Chapman, director of CRBI. “It provides drinking water to several municipalities and recreation to the citizens. However, the most interesting aspect of the river is that there close to 30 endemic species found here that can’t be found anywhere else on Earth.”

In fact, no other river basin in North America has a higher percentage of endemic species than the Upper Coosa River Basin. Those species include fish, crayfish, snails and mussels. In total, the river has been home to 100 different aquatic species. The river drains more than 5,000 square miles of land, from Southeastern Tennessee and North Central Georgia to Weiss Dam in Northeast Alabama. CRBI works from Lake Weiss and up into all of the tributaries that flow into the river.

Due to the treasure trove of aquatic life, CRBI and its volunteers have undertaken the task of ensuring that the surrounding facilities adhere to the standards of the U.S. Environmental Protection Agency’s Clean Water Act (CWA). The CWA is essential for the Coosa River due to the river’s close proximity to agriculture and industrial facilities. In the not so distance past, the river has been the victim of contamination from both industries. Coal ash ponds are a particular concern for the waterways of Georgia. For a long time Georgia power came from burning coal. Burning the coal turns a steam engine that generates electricity. Coal ash is a byproduct of burning coal and it is filled with several known carcinogens, neurotoxins and heavy metals, like arsenic, mercury, selenium and chromium.

There has been an effort to keep these chemicals out of the smoke released from smokestacks. This led to many plants “wet handling” the ash. They utilize a waste stream to collect the ash and pump it into a pond. These ponds are intended to be lined but many of the older ones are not.

“We have two coal-fired power plants,” explained Demonbruen-Chapman. “One of them has unlined coal ash ponds close to the river. It’s especially problematic because we have porous geology. There are voids underneath the surface so there is more interaction between groundwater and surface water than is typical in other places.”

When the material seeps into the groundwater it gradually makes its way to the river, contaminating drinking water and the aquatic life.

For the past 25 years, the group has used mostly low-tech methods to monitor the water. Following the Georgia Adopt-A-Stream protocol, CBRI trains volunteers on how to collect monthly water samples from selected data points along the river using Lamotte water monitoring kits. The sample data provides information on dissolved oxygen, pH, and turbidity.

Due to a chronic problem with agriculture run-off, members of the three-person staff conduct nutrient and conductivity testing. Holiday Darters in the Conasauga River, tributary of the Coosa River. (Credit: CRBI)

For nutrient testing, CBRI uses field techniques and Lamotte kits to test for nitrates and phosphates. Those are conducted by taking a water sample and mixing it with specific reagents to get a reading. Conductivity testing is done with a handheld meter.

“Regularly testing gives an idea of the general health of the river and serves as an alert for where we need to focus our attention,” said Demonbruen-Chapman, “The data can help pinpoint an area with a problem, a seeping coal ash pond or some illicit dumping. Then we can proceed with the right course of legal action.”

Now the water monitoring efforts of CBRI are poised to receive a technology boost from the Berry College Environmental Science program. The two groups are currently in talks to form an official partnership that would give CBRI access to equipment the group doesn’t currently own.

“One of the things I am most excited about with the partnership with Berry College is the ability to do more detailed nutrient testing,” said Demonbruen-Chapman.

A tentative plan includes college staff training CBRI volunteers to use the equipment which includes GPS-enabled data loggers that include probes for specific parameters. Students of the Environmental Science program will also use the equipment to gather data on the river. If everything pans out, the hope is that the partnership will start in the near future.

This new boost to the monitoring efforts, coupled with outreach to agriculture and industry, involvement in environmental legislation, and the state’s recent commitment to capping and removing the coal ash ponds, should help preserve and improve the Coosa River.

“In terms of biodiversity, the river has a very unique system,” said Demonbruen-Chapman. “It’s our job to make sure that lobbyists aren’t the only ones deciding how Georgia protects its rivers.”

CRBI believes the consistent monitoring and this new partnership will help them do just that.