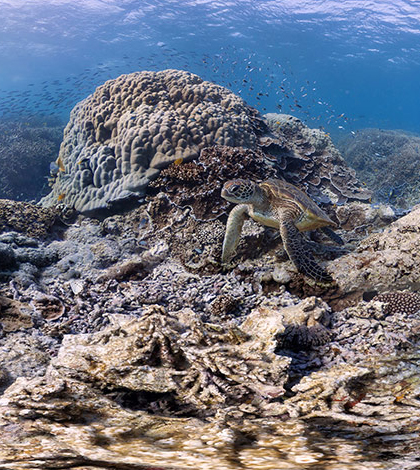 With levels of atmospheric carbon dioxide continuing to rise, scientists from Duke University and France’s Université de Bretagne Occidentale have found that very few coral reef ecosystems will escape the effects of rising seas and ocean temperatures. What’s more, the damage that is felt will very likely hit areas of human dependence the most.

Their study suggests that reefs near Australia, Indonesia, Micronesia, Southeast Asia and Western Mexico will bear the brunt of rising temperatures. By the year 2050, reef damage will result in more lost fish habitats and shoreline protection, jeopardizing the lives and economic prosperity of people who depend on coral reefs for tourism and food.

Using data from the maps, investigators predict that the countries of Oceania will be among the first to face the greatest environmental stresses from climate change and ocean acidification, followed by the Coral Triangle countries of Southeast Asia and parts of Australia. All of those areas have a high dependence on coral reefs.

Countries most likely to experience severe ocean acidification are generally different from those that will experience the earliest onset of coral bleaching. Acidification is projected to be worse for Baja California in Mexico, China, Japan and southern Australia because they are at the upper and lower latitudinal bounds of coral reef distribution. The regions are also generally in cooler waters that naturally carry more carbon dioxide.

Results of the study build on previous analyses to identify exactly how people and coral reefs may be affected by a high-CO2 future. The scientists also suggest strategies to help deal with possible changes.

Full results of the effort are published under open-access license in the journal PLOS ONE.