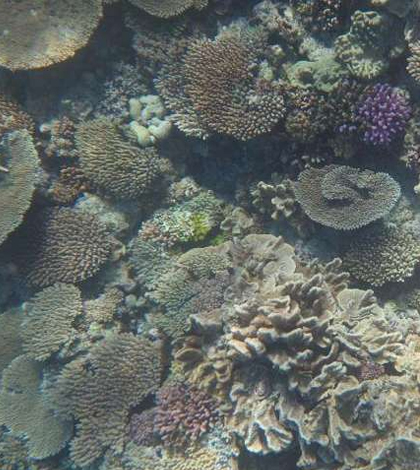 The structure and diversity of coral is at risk of dissolution from ocean acidification. (Credit: Kennedy Wolfe)

Waters near University of Sydney’s One Tree Island Research Station make up a unique coral reef environment, which at low tide consists essentially of a ponded lagoon surrounded by coral. Because of its enclosed shape, researchers were able to raise the pH of the water to reflect the pH during pre-industrial times before ocean acidification.

In a release from the university, scientists showed that the higher pH of the pre-industrial era mimicked at One Tree Island corresponded to higher calcification of coral, meaning enhanced coral growth. This behavior is in contrast to modern times in which ocean acidification is occurring, thanks to lower pH of the water surrounding coral reefs.

To perform the experiment, researchers filled a tank with 15,000 liters of water and pumped it into the lagoon, then measured the coral’s response to the more alkaline conditions of the water. It was clear the more alkaline conditions led to higher calcification rates of the coral. Researchers have suggested that increasing the alkalinity of waters surrounding coral reefs may help them grow; however, in practice only the smallest reefs could be saved this way.

Top image: The structure and diversity of coral is at risk of dissolution from ocean acidification. (Credit: Kennedy Wolfe)