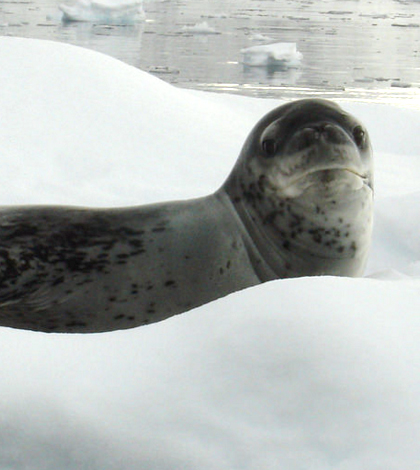 In the pristine wilds of the Antarctic, the mysterious leopard seal rules the animal kingdom. This polar bear-sized top predator has razor-sharp canine teeth and the ability to greatly impact or even decimate entire communities of its prey and yet very few scientific studies have focused on this species.

In the pristine wilds of the Antarctic, the mysterious leopard seal rules the animal kingdom. This polar bear-sized top predator has razor-sharp canine teeth and the ability to greatly impact or even decimate entire communities of its prey, and yet, very few scientific studies have focused on this species.

A novel research project led by Doug Krause, a graduate student at Scripps Institution of Oceanography at UC San Diego, is now uncovering details about the hunting behavior, diet, and diving activities of leopard seals through the use of cutting-edge technology, including unmanned aerial systems and Crittercams—small video cameras mounted to animals’ bodies to record their movements.

This research is being conducted as part of a three-way collaboration among Scripps Oceanography, NOAA Fisheries’ Antarctic Ecosystem Research Division, and National Geographic Remote Imaging (Crittercam).

Over the course of two field seasons from 2013-2014, Krause and his colleagues attached Crittercams to the backs of seven different leopard seals at Cape Shirreff, a remote NOAA field camp located on Livingston Island in the Antarctic Peninsula, one of the top three fastest warming areas on the planet.

The resulting 50-plus hours of Crittercam footage has provided researchers with a rare glimpse into the underwater lives of these powerful marine mammals and allowed them to fill in some “really important blanks” in their knowledge about this species. (View Crittercam video footage here.)

“Leopard seals are often portrayed as these large, ferocious, apex predators, and in many cases they are—but with new technologies and additional study, including the Crittercam, we are able to see below the water line and get a glimpse into their foraging ecology, which shows that they’re even more dynamic, even more adaptable, than we had previously known,” said Krause, a sixth-year PhD student in the biological oceanography program at Scripps and a research biologist at NOAA.

Historically, leopard seals have been a difficult species to study due to the animals’ solitary nature and preference for spending time on ice floes (ice sheets) which are constantly moving and have a limited amount of workable space for scientists to safely conduct research.

However, as ice sheets surrounding the land-based NOAA research station continue to melt at unprecedented rates, a growing population of large, adult female leopard seals have been hauling out on the beaches of Cape Shirreff annually between December and June.

“This opportunity has allowed us to start asking the questions that people haven’t been able to answer,” said Krause, who jumped at the chance to study this subset of big, dominant females for his dissertation research on leopard seal ecology. During the peak months of January and February, Krause and a team of scientists carefully selected, sedated, and then mounted a Crittercam unit onto each animal’s fur using an epoxy-based glue, later retrieving each video unit after 3-5 days. (This process does not harm the animal in any way.)

The resulting footage was nothing short of spectacular, riddled with surprises, drama, and an up-close view of life below the surface.

As generalist apex predators, leopard seals will eat almost anything. However, past studies have shown that in this particular area, their diet mainly consists of penguins, small seals, and krill.

Surprisingly, the Crittercam footage revealed that the study leopard seals didn’t eat any krill at all, and in fact spent the majority of their foraging time along the seafloor, where they hunted for notothen fishes, a group of bottom-dwelling ice fish. Closer analysis revealed that some of the seals had developed individually specialized techniques for hunting and catching these fish.

“In one piece of footage, it becomes really clear that the female swims along the bottom until she can detect one of these fish hiding under a rock and she’ll actually stick her snout down in there and scare the fish—or flush the fish—out from hiding and when it swims out into the open, she grabs it, and then takes it to surface to process it and eat it,” explained Krause.

Out of the 35 published reports on leopard seal diet, only two indicated bottom fish and only one indicated notothen fish, said Krause, “so it’s pretty surprising that this could be a significant portion of their diet.”

Krause and his colleagues were also surprised to find footage of leopard seals engaging in behavior known as kleptoparasitism, or food stealing. Prior to this study, some scientists had hypothesized that leopard seals engaged in cooperative feeding, which is when animals work together as a group to forage and hunt prey.

Dramatic underwater footage exposed six different fighting scenes between female leopard seals, including one incident where the Crittercam-wearing seal hunts and kills a fur seal pup, only to be caught off-guard by a sneak attack from another seal.

“It goes from a nice, calm, serene scene to documentary footage of a war film,” said Krause. “It becomes clear that they’re fighting with one another, being very aggressive, they’re striking at each other’s heads, and in the end, the interloper leopard seal ends up stealing the food from the female wearing the camera.”

Another plot twist revealed through the underwater footage was that leopard seals were scavenging carcasses. The research team also found some evidence that it wasn’t just random scavenging—that it may be food caching or food hoarding, a type of scavenging where an animal catches or finds food beyond what their immediate needs are, and then saves it for later, either by defending it or by hiding it (in this case, beneath rocks on the craggy seafloor or at depths below 10 meters).

“Scavenging is not uncommon for carnivore predators, but we didn’t know leopard seals were doing it. Ecologically, that becomes very important,” said Krause.

In addition to Crittercams, Krause and colleagues at NOAA Fisheries are looking at the use of drones and other unmanned aerial vehicles as a disturbance-free way to measure the size and shape of leopard seals and to get an accurate count of the number of animals within a population. This data is critical for scientists as they examine how climate change is affecting populations of leopard seals and other critters across the Antarctic.

“Doug’s innovative use of National Geographic’s Crittercam and our own NOAA hexacopters have revealed some surprising insights regarding how these impressive predators of the sea make their living and how they may be impacting the ecosystems of which they are a part,” said Lisa Ballance, director of the Marine Mammal & Turtle Division at NOAA’s Southwest Fisheries Science Center and Krause’s co-advisor. “It is exciting stuff and I look forward to news from his current field season.”

Although Krause is still completing his dissertation research, his preliminary findings indicate that leopard seals can greatly affect coastal ecosystems through direct predation and indirect hunting methods such as food stealing and scavenging. He called the joint research with Scripps, NOAA, and Crittercam a “fantastic collaboration,” and noted the increasingly vital role of video and other technology as scientific tools.

“The Antarctic Peninsula region is changing faster than maybe any place on earth, and with this technology we have an opportunity to study that transition while it’s happening,” said Krause. “Understanding those dynamics will be really valuable toward understanding how we can expect climate change to affect systems all over the planet.”