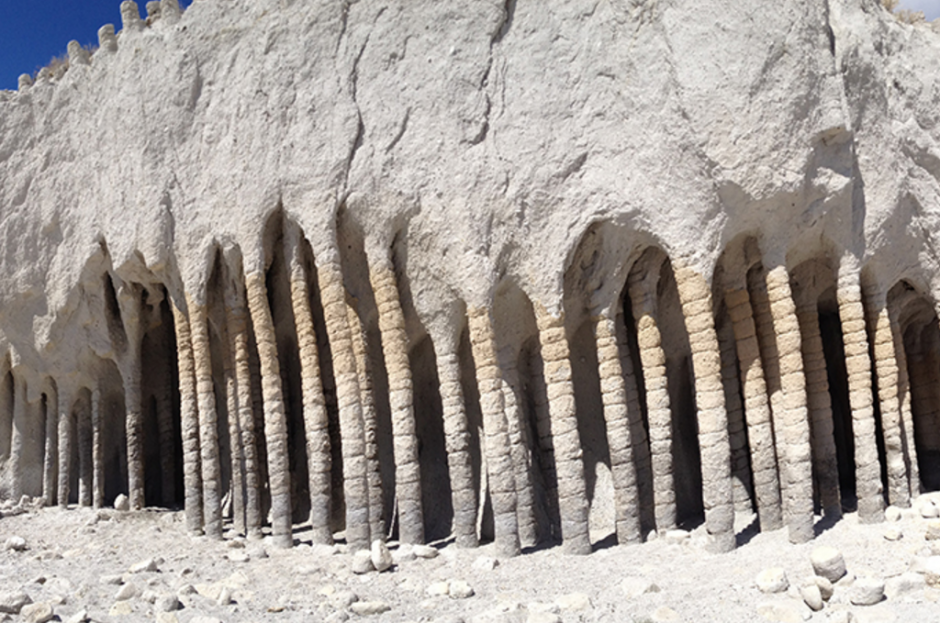 Following the completion of Crowley Lake reservoir in 1941, odd formations emerged on the lake’s eastern shore. They were stone columns up to 20 feet tall connected by high arches, as if part of an ancient construction. The rising gray cylinders have indentations ringing around them at intervals of about 1 foot.

Because of their appearance, the Crowley Lake columns have inspired comparisons to Moorish temples. With those types of descriptions out there, it’s not surprising that theories on the origins of the columns have been just as wide-ranging.

Some said the columns were just portions of rock that, as luck would have it, were eroded away to form the picturesque spirals and arches. But others out there believed the columns had a connection to the Crowley Lake area’s volcanic past.

To get at those questions, geologists at the University of California, Berkeley, set out to investigate. Using a slew of different methods, including X-ray analysis and electronic microscopes, applied to samples of the columns, the researchers found that there are tiny spaces throughout them.

The spaces appear cemented into place by minerals that are erosion-resistant, and could also be related to a large volcanic explosion that took place about 760,000 years ago. Researchers say that the blast was more than 2,000 times larger than that of the eruption of Mount Saint Helens, and created the Long Valley Caldera that holds the Crowley reservoir today.

Based on the evidence gleaned on the formation of the Crowley Lake columns, researchers believe that falling snow melted on top of the tuff rock deposits left after the eruption. The still-heated porous material would have caused the melted snow to boil and create the even spaces between the columns that exist today.

Estimates hold that there are up to 5,000 of the columns within a 2- to 3-square-mile area to the east of Crowley Lake. They appear in clusters of many different shapes and sizes. Some are gray and as straight as poles while others are reddish-orange and bent or tilting. There are also still-buried columns that would look like fossils to an untrained eye.

How do you think the columns in Crowley Lake formed? Know of any other lake mysteries we should feature? Please consider leaving a comment to share your thoughts!