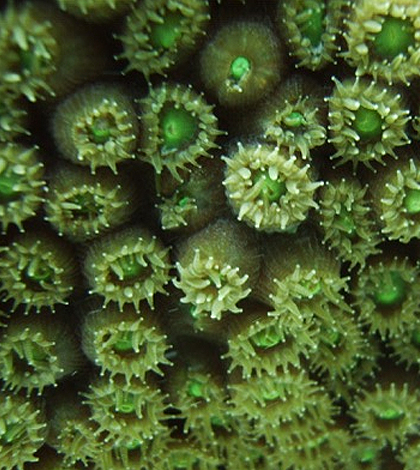 Researchers around the world are confident that ocean acidification impacts the abilities of shell-forming organisms to make the structures they need to survive. But little is known as to why.

Thanks to a study led by scientists at the University of Delaware, a little more light has been shed on the answer to that question. The researchers have, for the first time, measured the pH and the carbonate ion concentration of calcifying fluids found in coral. And they did it using a custom-built microelectrode sensor.

Getting this measurement done is actually a lot more difficult than it sounds because the layer of calcifying fluid in corals is less thick than a human hair. But the micro sensors that scientists developed could get the job done, so long as they didn’t push the device too far into a coral specimen.

With the new microelectrode, researchers now have the ability to probe through coral’s stomach tissue and into the calcifying fluid next to the rock of the skeleton, and capture data about what the chemistry is like where calcification occurs.

That’s a really important measurement to make because, while scientists know how acidification is changing seawater chemistry, they don’t yet understand how the chemistry of the fluid deep inside corals — where corals make their calcium carbonate skeletons — is changing.

A special chemical inside the carbonate sensor was designed to move carbonate ions across a membrane, creating a voltage difference that can be measured and used to quantify the carbonate concentration.

The researchers’ results confirmed what other scientists have measured before – the pH inside the coral’s calcifying layer is high. This finding supports the idea that coral are equipped with a proton pump that forces protons away from this site in order to regulate pH and allow calcification to occur.

The researchers guess that the corals are rapidly using the carbon to make their skeletons. Another hypothesis with ocean acidification is that a coral has to work harder to keep making the same amount of skeleton when there is a change in pH.

They add that, for the corals under study, when they back calculate the chemistry in the area, scientists found that the corals may not have to work quite as hard as has been thought.

The work opens up the scope of study to ask more questions related to ocean acidification and energy demand and how corals can potentially resist those kinds of stressors. It also could explain why the calcification rates of many species of corals are not affected by ocean acidification.

Now that researchers have developed a way to overcome the technical difficulties associated with taking these complicated measurements inside coral, the next step is to collect measurements under different conditions and from other species of corals.

Full results of the effort are published in the journal Nature Communications. It was funded in part by two awards from the National Science Foundation.