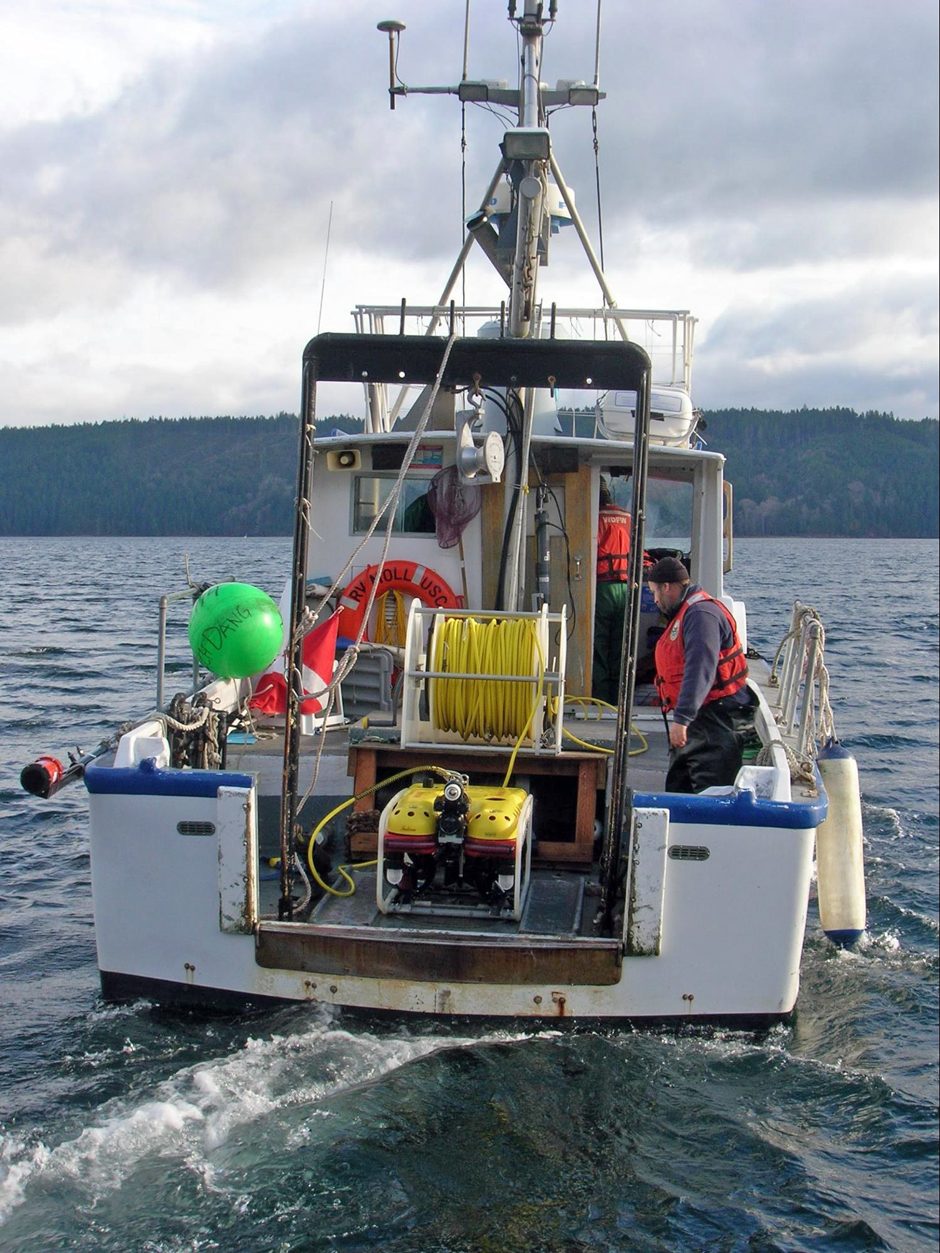 “In the Pacific Northwest, the Washington and Oregon coast, several species of Rockfish have been fished for decades, with up- and downswings in abundance,” explains Dr. Lowry. “When fishing pressure decreases, and the stocks start to recover, we have gone back to fishing—the pendulum has swung over the years. My research unit focuses most of our effort on the Puget Sound, where considerable stress and fishing impacts on Rockfish manifested in the 1970s. Within a decade conservation concerns arose, including fewer and smaller fish being caught.”

These conservation concerns drove a management cycle that is ongoing and inspired the current population assessment studies. This also motivated the team to try the ROV, which has become their go-to tool.

“We had three species of rockfish listed under the endangered species act in 2010,” details Dr. Lowry. “Prior to that, we were already experimenting with different methods for visual surveys, essentially trying to document where and how many fish there were without killing any. We had taken a heavy frame with a camera attached, dropped it to the bottom to record things for a minute, and then pulled it back up repeatedly. The Department did thousands of those drops between 1994 and 2004.” 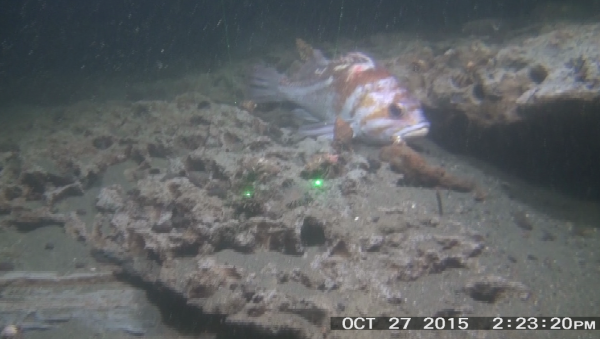 Lower fish mortality rates are a primary reason that these kinds of tools are better for the team to use, from a conservation perspective.

“With species where mortality is a concern, your goal is to document but not disturb or kill,” Dr. Lowry describes. “There are many options for counting fish, such as dragging a net across the bottom or hook and line sampling, for which the mortality rate can be considerable. The typical way to document where fish are, how big they are, and how many there are, is to catch them. Cameras allow us to count and observe fish in their natural habitat, without actually catching, killing, or injuring them.”

Rockfish are particularly difficult to survey because of their behaviors and preferred habitats.

“Dragging a big net across the bottom is not a very effective way to sample where there are big piles of rock or shear walls because the net tears and snags, but that is where these fish live. You also end up destroying some of the habitat that is critical to the survival of the fish you don’t catch,” explains Dr. Lowry. “Even if you can drag the net over the top, some of these fish actually live down in the crevasses between rocks,” remarks Dr. Lowry. “Studies have placed cameras on the bottom and shown that fish sometimes literally tuck down into a crack as the net goes right over them; the fish is in the path of the net and should be counted, but you would never see it. The ROV allows us to look down into those crevasses and include these fish.”

The team relies on an ROV platform for this kind of work for additional reasons. For example, the platform is very mobile and agile underwater, eliminating the need for hook and line fishing—something especially important in the context of rockfish. 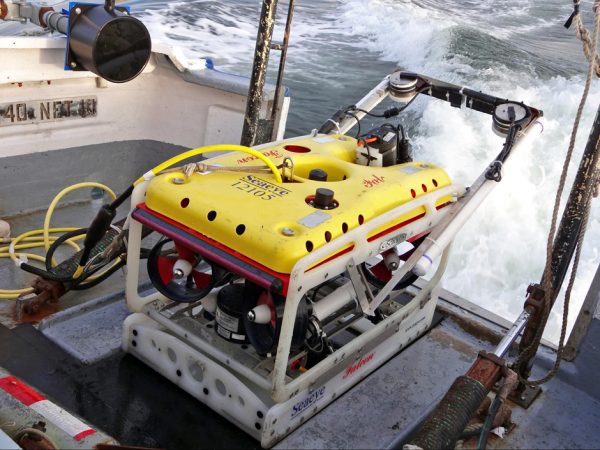 “If you’re fishing with hooks, you’re counting on the fish being hungry, but rockfish have a very slow metabolic rate,” comments Dr. Lowry. “They grow and mature very, very slowly and they live a long time, over one hundred years for some species. In the context of these ongoing recovery efforts, it is difficult to explain to people that a species you stopped fishing for twenty years ago might still be gone because the generation you left in the water still has yet to reach sexual maturity and start producing the next generation.”

Dr. Lowry puts this down, in part, to people thinking differently about fish life cycles compared to our own—and mostly that’s appropriate. However, with rockfish, the timeline is much slower.

“Especially in our area, if you talk to people about a generation of fish, they think between three and five years, because a salmon will spawn, its babies will wash downstream, and the next batch of adults will return within three to five years. But we’re talking 20, 25, 40 years for some of these fish—much more similar to a human or large mammal life cycle timespan.”

Although this technology has changed the game in the rockfish conservation efforts, it’s still not a perfect system.

“We have multiple cameras, lights, and sonar units, so you can actually detect what is well out ahead of you, but it’s still difficult because you’re trying to document things visually in an area that you can’t see very well,” Dr. Lowry points out. “Even with bright lights and cameras, fish can move aside before you make contact with them. They can also swim over the top of the ROV because the camera is looking downward, so it doesn’t do as good of a job with those mid-water species.”

Thus, the team still requires other methods such as nets to collect mid-water species.

“Some groups are attaching cameras to the net, so instead of catching the fish, they’re basically towing an open-ended net with a camera on it, so as the fish pass by you can get video clips of them and identify them, but you never actually catch them or bring them aboard,” comments Dr. Lowry. “That isn’t a method we’ve used, but we’re using bottom trawl surveys over muddy bottoms away from where most of the rockfish occur to sample flatfish, codfishes, sharks, and other species.”

Next up for the team: continuing to use bottom trawls on deep, muddy habitats, ROVs in deep, rocky habitats, scuba diving in shallow rocky habitats, and combining beach seins, dipped nets, mid-water trawls, and other methods to attempt to discern where these fish are and how many there are.

“A primary goal for us now is to mathematically determine how to combine those estimates, because fish are moving,” states Dr. Lowry. “In some cases, you catch them using one tool and not the other, but sometimes you catch them using three or four different tools, so you have to determine whether you are sampling the same group of fish that are just moving, or whether you are sampling fish that are relatively stationary. For example, if you are sampling in one area, and then another, and another, it might be three separate groups you can just add up—or in reality, you may be overestimating them because there is some interchange among those groups.”

To account for that, the team tags individual fish with individually coded markers. If they recapture them, they can confirm that they caught that specimen in deeper waters on one occasion, and in shallower waters another time. This allows the team to estimate the exchange between the two areas, and by extrapolation, the two sampling methods.

“It seems every time we tag them we learn something new,” Dr. Lowry says. “There are people who have tagged all different kinds of animals that supposedly don’t go deeper than 200 feet, but then somebody catches them in 1,000 feet of water. Several years ago, a white shark tagged in New Zealand dove to almost 4000 feet! At the time we had no data to show they go that deep. This was literally out in the middle of the ocean way beyond their known depth range—but there you have it! So, if the water is salty and cold, they’ll go there!”

For Dr. Lowry and the team, advanced technology in the hands of so many people has truly changed the entire research landscape.

“We’re using a commercially generated Saab Seaeye ROV, and there are other commercial ROVs on the market, but many people are basically building ROVs from scratch, including their own tech and script,” comments Dr. Lowry. “There are now actually international competitions for ROV design, everybody from high school kids all the way up to the military and large corporations, and they have come up with some pretty amazing stuff that is really revolutionizing the ability to cover ground and see places we have never seen before.”

According to Dr. Lowry, this is essentially because of the drone movement, as these ROVs are just underwater drones.

“It is really phenomenal, we are seeing behaviors and fish in spaces we’ve never seen before,” adds Dr. Lowry. “It’s a pretty incredible time for discovery. The enthusiasm people have for it when you go and talk to them is palpable. We’ve reduced our impacts now, and with these visual surveys we can get so much information and kill a very minimal number of individuals to get that same information.”

In fact, these kinds of technologies have inspired the public so much, that the team sees more and more young people in their work.

“I think the message is, stay tuned and never stop exploring,” states Dr. Lowry. “We get a lot of high school kids that come out with us and ride on the boat for a day or two, and then they are off and running. They are prepared to design their own ROV and pull together loose aquarium parts and parts from the hardware store to try to drop a camera down into the ocean to see what’s going on, and there’s no end to it.”

For the WDFW team, this is a major bonus, too, because they are helping mentor the next generation of conservation scientists.

“All of us love to fish and it makes us conservationists to our core,” remarks Dr. Lowry. “We love to eat them, but if we don’t protect, and restore, them first there will be nothing for us to eat, let alone to fuel the marine food web.”