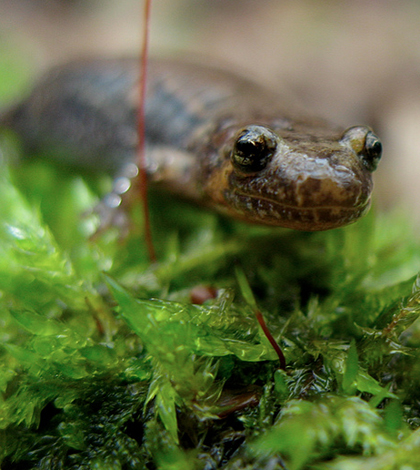 Consider the salamander, an unassuming amphibian whose secretive ways keep it well out of the spotlight in the forests where it hides among rocks and logs. Maybe so, but these secretive critters are often the dominant vertebrates in forested headwater streams, playing a critical role in their ecosystems.

“There is a lot of biomass tied up in salamanders,” said Evan Grant, a research wildlife biologist with the U.S. Geological Survey’s Northeast Amphibian Research and Monitoring Initiative.

Salamanders prey on small invertebrates and are in turn preyed upon by larger predators, providing an important link in forest food webs. They’re also sensitive to changes in stream water chemistry and temperature, so changes in their population numbers or distribution can be a sign of environmental disturbances.

These traits have earned salamanders a place among the “vital signs” tracked by National Park Service’s Inventory and Monitoring Program, particularly within the three parks in the National Capital Region around Washington, D.C. In a contribution to that effort, Grant surveyed salamanders in 29 streams across the three parks and weighed their distribution against water characteristics like temperature, pH, specific conductivity and nutrient concentrations.

The results of the study, recently published online in the Journal of Herpetology, could help park managers better understand the water quality constraints on which streams are suitable for salamanders to occupy. That could give clues to this causes behind potential shifts in salamander populations that the Park Service’s monitoring might reveal.

Grant’s study targeted the Northern two-lined, red and dusky salamander species in Prince William Forest Park, Chesapeake and Ohio Canal National Historical Park, and Rock Creek Park. The best time to find those species is in June and July, a famously muggy time in the D.C. region. That would ordinarily make the legwork of a scientific animal survey all the more grueling, but Grant said the parks’ bottomland hardwood forests produce a cooler microclimate that makes the work easier.

“It’s a nice place to work in the heat and humidity of Mid-Atlantic summers,” he said. Grant spent long days hunched over streams, overturning rocks and other cover with his aquarium net at the ready to snatch any larval, juvenile or adult salamanders that appeared. Captured animals were held on the banks in plastic bags before being identified and released back into the stream. Stream water temperature, specific conductance and pH were measured in the field with a handheld multiparameter meter. Nutrient concentrations were determined in the laboratory from water samples.

Grant plugged the water quality and salamander data into a model that evaluates the relative influence of each parameter on whether any of the surveyed species would occupy a stream segment. Temperature proved to be overwhelmingly important in the streams Grant sampled in the year that he sampled them. The model showed more uncertainty over the importance of the other stream variables.

“I wouldn’t conclude from this study that pH is not important for salamander occupancy,” Grant said. “It just was not as important as temperature given the range of pH levels we observed in our sample.”

Knowing that temperature is important to salamander occupancy could help the Park Service project how the distribution of these species might change given a rise in stream temperatures, Grant said.

Even though Grant describes the work of sampling stream salamanders backbreaking, he said the work is fun and he wouldn’t do it if it weren’t.

“It’s backbreaking because you’re bending over the stream for 10 or 12 hours a day trying to catch these little guys,” Grant said. “But it beats sitting in an office.”