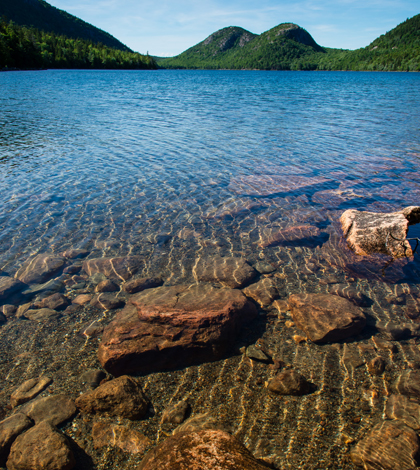 Acadia National Park, the oldest national park east of the Mississippi, sits off Maine’s Atlantic coast and covers most of Mount Desert Island — an unlikely name for a landmass covered in lakes and ponds. One of those is Jordan Pond, the deepest on the island, which is a famously clear lake in a state famous for clear lakes.

“Jordan Pond is historically one of the most transparent lakes in Maine–or at least that’s what they claim,” said Nora Theodore, a masters student in ecology and environmental science at the University of Maine. And though the lake remains incredibly clear, decades of monitoring show the clarity is trending downward. “It’s an extremely low productivity system, but that’s been changing,” she said.

Transparency in Jordan Pond has been in decline since the 1990s. The National Park Service’s monthly manual water quality monitoring shows a 2-meter drop in Secchi disk readings over the past five years alone. A water quality data buoy soon to wrap up its second season on the pond is helping scientists and managers better track clarity, as well as the factors that may be contributing to its decline.

There are a few hypotheses for the declining clarity, according to Theodore, the aquatic data manager on the buoy project. One is that the lake is responding to a decrease in acid rain resulting from Clean Air Act regulations. The thinking goes that less acid deposition decreases the ionic strength of soils in the watershed, meaning more dissolved organic matter is released into the lake. If that’s the case, Jordan Pond may just be returning to a more natural state. The trend could also be a result of the more frequent and intense rain storms the region has seen since 1970, a trend that scientists expect to continue. Theodore said the additional runoff may be flushing more organic matter into the water. That’s something that researchers will able to track with the fluorescence of dissolved organic matter, or fDOM, sensor on the buoy.

Measurements for all those parameters are reordered every 15 minutes and sent to a public website that explains the data and describes the project and the people involved. The buoy’s location on a high-profile area of the park also makes for a good educational opportunity, Theodore said. Around 60 percent of the park’s 2 million annual visitors stop at the pond. Those who stop at the Jordan Pond House Restaurant for one of its famous popovers can check out the buoy data on an informational kiosk.

And it seems likely that they will. The project, a collaboration between the University of Maine, the park, the non-profit Friends of Acadia group and Canon USA, is one of a growing number of buoy deployments in Maine, where residents appear to take water quality a little more seriously.

“There is definitely something to say for the water resources that this state has to offer,” Theodore said.