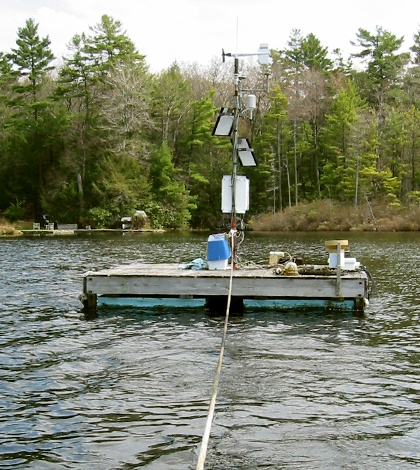 As Cyclone Irene passed over Lake Lacawac in August 2011, the water swirled as the force of wind and rain accelerated normal late-summer mixing by about a month. Other lakes in the storm’s path saw similar or greater abrupt mixing, but Lacawac was shielded by its unique geography.

A pristine glacial lake in the Pocono Mountains, “Lacawac was at the small end of the spectrum because it has a small watershed. Its thermal layers were changed by the storm, but it recovered fairly quickly,” said Bruce Hargreaves, associate professor of earth and environmental sciences at Lehigh University and manager of a monitoring platform on Lake Lacawac.

Lake Lacawac is part of the Global Lake Ecological Observatory Network and has supported lake instrument research for many years, according to Hargreaves. Through a GLEON collaboration, data collected on Lake Lacawac during Irene were combined with findings from eight other North American lakes in a rare large-scale analysis of high frequency, automated lake data to determine the immediate impacts of an extreme storm.

“No one site can provide data that explain the storm’s impact,” said Hargreaves.

The massive data set in this study shows the role a lake’s watershed plays in the impacts it feels. It also shows the the importance of lake metabolism, which the scientists estimated by measuring the balance between oxygen production and consumption with automated sensors.

Other lakes in the study had similar automated sensors on buoys or rafts. On the seven lakes with oxygen sensors, calculations of lake metabolism showed that the balance between production and consumption had been decoupled by the storm. This change was explained by the expected influx of organic matter and sediment carried by storm runoff. The influx of organic matter increased the consumption reduced production. The effect was especially pronounced on Connecticut’s Lake Lillinonah, said Jennifer Klug, associate professor of biology at Fairfield University and lead author of the study. She manages a station on Lillinonah with a non-profit group called Friends of the Lake.

“The change in (metabolic) stability in Lillinonah was incredibly dramatic,” said Klug. “We saw basically a wall of water come down the river and into the lake.”

The researchers learned that the key to understanding how much each lake’s thermal structure was disrupted by this storm was watershed size relative to the size and depth of a lake. They coined a new term, the “potential volume replacement” of a lake, to describe just how much of a lake’s stored water could be swept away by rain falling into a lake and onto its surrounding watershed.

“Bigger lakes and lakes closer to the storm path had more exposure to wind, and bigger watersheds brought in more runoff, so together these explain the extent of mixing,” said Hargreaves. Lake Lacawac is a small lake with a small watershed so mixing impact was reduced.

Lake and reservoir managers cannot control the path of a storm, but this study shows that lakes and reservoirs with large ratios of watershed area to lake volume are most at risk for changes to metabolism and thermal mixing from large storms.

Lacawac will continue to benefit from its surrounding landscape when extreme storms hit in the future, and its researchers will be better prepared to monitor their impacts. Hargreaves added a miniDOT oxygen logger to his monitoring platform in June, a gift from Precision Measurement Engineering, Inc.

For the past two years, Lacawac has also been the test site of a new auto-profiling buoy designed by Hargreaves and his colleague Craig Williamson of Miami University to study climate change in lakes. It’s managed by Williamson’s graduate student Jennifer Brentrup with help from Lesley Knoll, director of Science and Education for Lacawac Sanctuary.

The sanctuary also received a significant grant from the National Science Foundation for a new science lab that will support ongoing research into advanced instrumentation and climate change.