Data From Western Streams Will Aid Understanding Of Drought Vulnerability 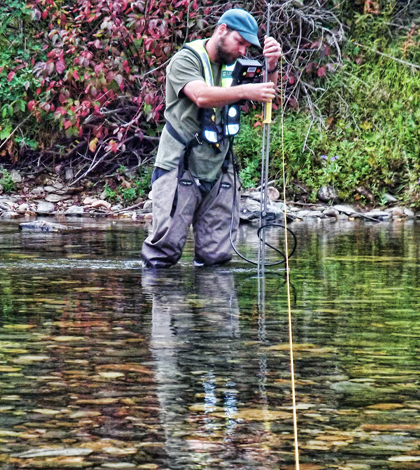 All across the state of Idaho, 27 researchers with the U.S. Geological Survey are studying 150 different stream sites to gather baseline data helpful for assessing just how vulnerable streams in the state are to drought conditions.

Their preferred time of year for attacking the issue is late summer, right before the rainy season starts. That’s because the streams will be at their lowest during that period, giving an easily identifiable baseline on which scientists can build throughout future studies.

“The reason why we had so many people is so we can get it done as quickly as possible. It’s a snapshot in time,” said Dave Evetts, data chief at the Idaho Water Science Center. “It’s really important that we get these measurements at the lowest point in the year — late summer and early fall. It’s a short window to work with.”

Add a couple of ongoing wildfires to that time crunch and things can get a bit hairy. Evetts says that the study is mostly complete, in alignment with its mid-September target for being done, but that a few sites still need to be assessed. These are located in areas affected by fires near Clearwater, Idaho.

Once USGS scientists can access them, they will use methods that they’ve employed to study other streams in the investigation.

“Most of the sites are pretty small. They’re streams you could straddle,” said Evetts. Typically, FlowTrackers are used to measure velocity by a researcher outfitted in waders. Those measurements are complemented by measures of a stream’s width and depth that can be used to calculate discharge. “We also measure temperature, which impacts fish, and conductance. It tells us if the source of the water is groundwater or snowmelt.” Evetts says that Idaho has been lacking quality snowfall in recent years. Snowpack is much more valuable in terms of ensuring water availability throughout the year because it melts slowly and adds to streams incrementally. Rainfall, by contrast, comes rolling through and pushes streams higher for only a short period of time before moving on to waterways downstream.

The state has had a fairly normal amount of precipitation recently but most of that has come in the form of rain.

“It’s a unique opportunity to see how that affects stream systems in Idaho,” said Evetts. “Some potential causes for that — the obvious one is climate change. We also have a very strong El Niño that is forming in the Pacific.”

He continues, “Basically, off of personal experience, we seem to be trending to get more rain instead of snow. Idaho’s been lucky to store water in reservoirs and it’s been able to call on that. If that continues, we could see more severe impacts in years to come.”

As for the results of the work, Evetts says that he doesn’t have any expectations for what the data will reveal. Still, the findings will likely be useful to water managers across the state. By pinpointing which streams are most vulnerable to drought conditions, the officials can change conservation approaches or adjust how water resources are allocated. In addition, fish and game organizations can use the information to see how drought conditions could affect fish and wildlife.

In the future, further study on these streams would be incredibly valuable for helping the management of water resources, but that is up in the air right now.

“We’d like to see if we can get cooperation with state and federal agencies. This study in Idaho is completely funded by the USGS,” said Evetts. “Additional data collection for years to come would help establish trends that could help us deal with sustained drought conditions, to gauge if it will be here a while, increase or be more severe.”

The work in Idaho is part of a larger effort supported by the USGS that is underway in a total of six western states to assess vulnerability to drought. Nearly 500 other scientists are aiding efforts also taking place in California, Nevada, Oregon, Utah and Washington.