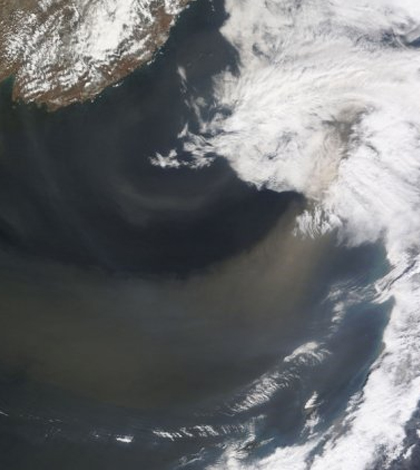 Satellite image from 2012 showing a dust storm blowing over the Sea of Japan out to the North Pacific. (Credit: NASA)

Phytoplankton growth is being significantly influenced by desert dust blown into the ocean, according to a recent MIT press release. Dust from desert storms in Mongolia and China is carried in the wind and deposited into the Pacific, where it remains near the surface for around six months. The iron in the dust drives phytoplankton growth until the iron sinks into the ocean, researchers found. Their results have implications for global climate models.

By comparing the amounts of thorium-230 in the ocean samples to the amount from uranium decay, scientists estimated thorium’s removal rate, which could be related to the amount of dust and iron in the ocean’s surface. From there it was possible to estimate how much iron was in the ocean surface and how long it lingered. An average dust particle composition was also used for the calculations.

Top image: Satellite image from 2012 showing a dust storm blowing over the Sea of Japan out to the North Pacific. (Credit: NASA)