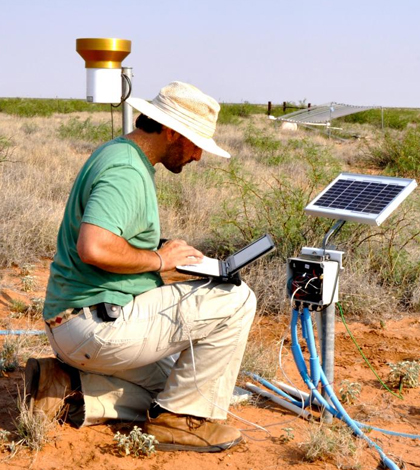 Researchers at Arizona State University, studying in the Chihuahan desert of New Mexico, have made some interesting finds related to ecosystem “tipping points.” The term refers to the points at which areas are changed beyond what is typical for them, practically creating new ecosystems where some life forms dominate and others falter.

The scientists approached the issue by setting up 50 different study plots in the desert. These were laid out within the Jornada Basin Long Term Ecological Research site and incorporated gear like tipping bucket rain gauges, data loggers and custom constructions that redirected and cut off water as needed for study treatments.

The experiments ran for six years and specifically looked to mimic unpredictable weather patterns, such as wet years and dry years. The researchers were concerned with the effects that changing water availability had on two types of plants: grasses and desert shrubs.

Through manipulating the amounts of water that different treatment areas received over the years, the scientists were able to gauge how extreme weather could affect such desert landscapes in the future.

When unpredictable weather patterns create alternating wet and dry years, researchers say they found that overall ecosystem productivity declined. This was because much of the grasses under study diminished while desert shrubs began to flourish. The scientists say that not all species were found to respond effectively to extreme weather events including both in dry and wet conditions. Grasses simply didn’t fare as well as the shrubs, they found, an important find with implications for the area’s cattle ranchers who need the grasses to feed their herds. The effect of that could be passed on to humans, scientists add, as cattle with less food may likely produce less meat.

In addition to those results, researchers also looked at the effect of variability in precipitation on their study sites. Over the entire period of six years, they found that the effect was amplified. And even after the experiment had ended, the effects persisted, they say.

Because of that, effects of climatic variations could be worse than the scientists predict. These could include even larger variations and ecosystem shifts to completely different states.

Under drought conditions, grasses reduce their abundance and their ability to absorb water that then is transferred to deep soil layers that are exclusively explored by shrubs. The researchers say that their work addresses an understudied dimension of climate change that could lead to widespread shrub encroachment reducing the provisioning of ecosystem services to those living around the desert.

The next steps for the scientists is work to incorporate their findings into new tools and techniques that can help improve the management of systems like those in the Chihuahuan desert, as well as possibly give early warning indicators of when tipping points will occur. The results could also be applied to similar arid and semi-arid regions across the globe, including in Argentina, Mongolia or Mexico.

For more on the findings, a research article detailing the work can be found in Proceedings of the National Academy of Sciences.