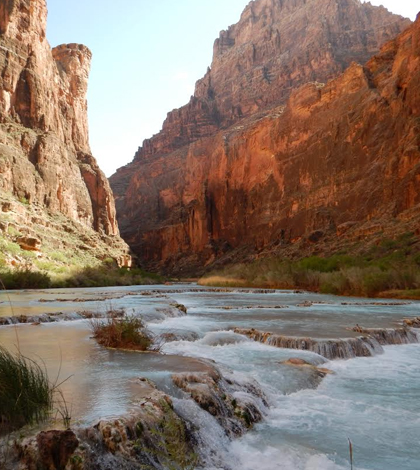 The Asian tapeworm has become a big problem for U.S. fish hatcheries, where hatchery managers try to manage the invasive parasite with drugs similar to those used to de-worm dogs. Another part of managing the parasite is detection, something that isn’t done easily.

Presently, the only way to detect the Asian tapeworm involves killing the suspect fish, cutting it open and spotting worms in its gut. Of course, this sort of detection method isn’t always ideal, especially for endangered species like the humpback chub, found only in the Grand Canyon.

In an ongoing work to try and find a new, non-lethal way to test fish, as well as the rare humpback chub, for the invasive Asian tapeworm, researchers from the U.S. Fish and Wildlife Service and New Mexico State University have made a research trip to the Grand Canyon. While there, the scientists sampled hundreds of fish and tested out a possible replacement for the lethal screening procedure.

“Fish health inspections for Asian tapeworm or other gastrointestinal parasites generally involve necropsy and/or microscopy to visualize and identify parasites in the fish intestine, and this method is not ideal for an endangered fish. The detection method I’m working on is non-lethal,” said Meredith Campbell, a graduate research assistant at New Mexico State University. “If we can screen wild fish with the non-lethal methodology, then we can get an estimate of prevalence in the wild as part of assessing the overall health of this fish population. Right now, it’s simply not an option to be doing screening and treatment of these wild fish because they are protected.”

The method that Campbell is working to develop doesn’t involve hurting fish at all. Instead, it utilizes unique genetic primers made to help detect infection of the parasite. She is combining that with anogenital swabs that pick up fecal matter. The reasoning is sound: Since Asian tapeworm infections are transmitted through feces, it makes sense to look there.

If the new method pans out, others involved with the project say that it could also aid in work to prevent the extinction of endangered humpback chub. That’s partly because it’s unclear how much the fish is being affected by Asian tapeworm in the environment. The effects are also murky because the fish didn’t evolve with the parasite as the tapeworm is not native to North America. “As a federally endangered fish, humpback chub already face a number of threats and challenges including extreme habitat modification, invasive competitors and predators (such as brown trout and catfish) and introduced parasites and diseases. Depending on the severity and intensity of infection, Asian tapeworm can cause pathology like blockage of the gut, gastrointestinal inflammation, hemorrhaging and perforation,” said Campbell. “Asian tapeworm has the potential to affect the growth and survival of fish that could potentially be recruited into the population, especially vulnerable juvenile fish. Essentially, Asian tapeworm is one more complication in a long list of factors contributing to the plight of the humpback chub.”

So to further the goal of building a new, non-lethal detection method, Campbell traveled with the U.S. Fish and Wildlife Service to the Grand Canyon during late September and early October 2015 to gather and swab as many fish as possible.

While there, she followed U.S. Fish and Wildlife protocols to gather data.

“For capturing fish, we deployed hoop nets, which are nets with a cone-shaped mouth to allow fish to enter but not escape. These nets are placed along the edge of the river or below the travertine dams where the fish tend to aggregate and spawn,” said Campbell. “I used these sampling trips as an opportunity to collect data for my study, which included collecting fecal swabs for genetic analysis and confirmation of Asian tapeworm infection.”

She and others also recorded information on individual humpback chub captured, such as size, condition and PIT (passive integrated transponder) tag numbers. With that data, it is possible to then correlate Asian tapeworm infections with variables like fish age, capture location and condition.

Campbell is continuing the work to analyze the data that has been collected so far. And her hopes are that they’ll reveal useful insights for helping fish like the humpback chub and others affected by Asian tapeworm.

“I am optimistic that the work will shed some light on the prevalence of Asian tapeworm in this population of humpback chub. I also think the tool has potential utility for managers of captive stocks of humpback chub to quickly and easily screen fish before translocation,” said Campbell. “Ultimately, the goal of the tool is to provide the option for managers of these fish to incorporate screening for internal parasites into their routine population monitoring and health assessments.”