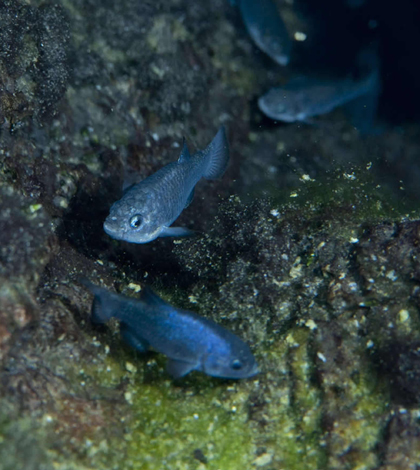 Devils Hole in Southern Nevada is a groundwater-filled, van-sized fracture in the desert bedrock that’s surrounded by high fences and motion sensors.

“The sensors are sensitive enough that sometimes chuckwallas kick rocks down and call the police,” said Mark Hausner, post-doctoral fellow with the Desert Research Institute.

The security measures are there to protect the only natural population of the endangered Devils Hole pupfish, which fell to record-low numbers in 2013 when counts pegged the population between 35 and 65 fish.

Historically, the population would fluctuate annually from around 400 in the summer to 200 in the winter after a natural die-off. But the species has been in a mysterious decline since the 1990s. Scientists like Hausner are working to test hypothesized influences on the population such as the effect of climate change on water temperatures and the food web.

Devils Hole’s surface area is only about about 2 meters by 6 meters, half of which covers a shallow shelf where the pupfish forage and spawn. The other half drops down into a huge underwater cavern with a depth that hasn’t yet been determined.

“The divers have gone down to 130 meters, dropped a flashlight and watched it bang around for another 20 meters or so,” Hausner said. “But then the angle got too steep for them to see the light.”

But the pupfish depend mostly on the shallow shelf, which supports benthic algae growth as well as temperature and dissolved oxygen levels conducive to spawning and juvenile fish development. Though the fish retreat to the pool during the warmest parts of the day, they return to the shelf daily. Devils Hole, with the shallow shelf in the foreground and the opening to the cavern in the background (Credit: U.S. Fish and Wildlife Service)

That was no simple task, as access to Devils Hole, which is within an outpost of Death Valley National Park, is highly restricted by the National Park Service. Equipment must be disinfected before it goes in the water to prevent introducing new species. And researchers who do get access had best not overstay their welcome. As Hausner put it, “Get in, collect your data, get everything out, don’t set foot in there again unless you absolutely need to.”

Hausner said he saw the inch-long, iridescent blue pupfish swimming over the shelf as he worked, and the fact that those were some of the only members of their species on left on earth wasn’t lost on him

“It’s not something that you forget,” Hausner said. “You might see 20, 30 fish during the day when you’re working there. Well, that’s half the population.”

With the model written and calibrated, the work now turns to plugging in projected changes in the region’s climate to simulate peak water temperatures. That will give an idea of what will happen to the size of the window of optimal spawning conditions when temperature and food supply is just right.

The results won’t just benefit the few dozen pupfish left in Devils Hole, Hausner said. The stress of warming waters brought on by climate change is a threat to fish worldwide. Closer to home, there are three other species of endangered pupfish just in the same complex of desert uplands and springs where Devils Hole lies.

“They’re going to be subjected to the same stressors,” Hausner said. “Devils Hole is a leader because it’s so small and physically limited that it’s going to show effects first.”