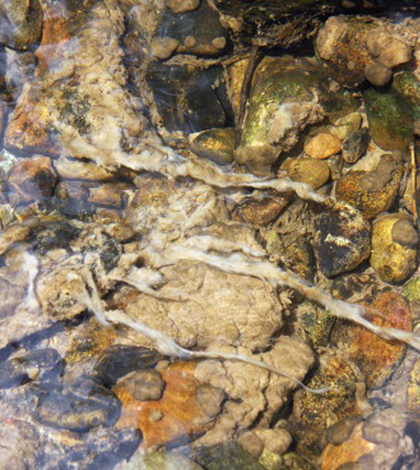 It kills fish, fouls up waterways and its appearance has earned it the name “rock snot.” Seven U.S. states, Chile and New Zealand have passed legislation to prevent this notorious algae’s spread. However, a recent study suggests that Didymosphenia geminata is an algae poorly understood both in origin and function.

“It’s in a lot of rivers where I work in Colorado, and it’s always been there,” said Brad Taylor, assistant professor at Dartmouth College. “However, only recently has it formed blooms and only in some rivers. As I continued to work on the causes and consequences of blooms, and visited other areas with blooms, such as Chile, I started to question whether D. geminata – or ‘didymo’ had been introduced anywhere.”

Taylor recently co-authored a study analyzing a broad array of scientific literature dating back to the 1800s — including other studies from Taylor and his coauthor Max Bothwell of Environment Canada. They argue that current efforts to curb the algae’s spread are ineffective and misguided.

Not everyone agrees with Taylor and Bothwell’s study.  New Zealand experts issued a response to the study, maintaining didymo is an unwanted introduced organism in their waters.

“They missed a major point of our paper,” Taylor said. “Even if it was introduced there, that is now irrelevant.” One of the study’s main points, Taylor said, is that free-living microorganisms like didymo cannot be controlled by measures such as the “Check, Clean, Dry” campaign that encourages inspection and treatment of equipment and clothing between uses. The best evidence for that comes from New Zealand where Taylor said some of the best research shows the distribution of blooms is solely the result of low phosphorus.

But why all the fuss over didymo in the first place?

One concern is its effects on fish. The blooms tend to support tubifex worm, which are the only host of the fish parasite Myxobolus cerebralis. The parasite causes whirling disease, which leads to skeletal and neurological damage in young fish.

Didymo blooms are unlike those of other algae, Taylor said. While many algae blooms are the result of an increase in cellular biomass, didymo blooms are actually formed of carbohydrate-based stalks. In some cases, streams without blooms have high densities of didymo cells.

The algae produces stalks in an attempt to gain nutrients, forming telltale drab mats and tufts along the streambed. The obvious presence of blooms in popular waterways might lead some to believe that the algae is thriving, but that isn’t necessarily true.

“In fact, it’s probably not doing better in terms of evolutionary fitness because its cell division rate is lower,” Taylor said. To better understand didymo, Taylor examined historical and fossil records. While fossil records show didymo cells dating as far back as 10,000 years in the Delaware River, didymo blooms appear to be a purely contemporary phenomenon. Poring over literature of fly fishing, a sport that has existed in the U.S. since the 19th century, Bothwell found no mention of didymo blooms.

“Anglers have been the primary reporters of blooms, so it seems unlikely bloom conditions would not have been mentioned in historic writings,” Taylor said.

Didymo’s presence in recreational hotspots has fueled the belief that the algae spreads via unwitting humans, but that doesn’t explain the appearance of blooms in other locations. Taylor’s study suggests a far greater catalyst behind the blooms.

“In the past ten years, didymo started blooming in remote areas of the world, such as in New Zealand, Colorado, and Chile,” Taylor said. “So the idea is that whatever is driving the blooms could be a global process.”

That global process, Taylor said, could be climate change.

“One of the possible links with climate change is the shift to an earlier growing season,” Taylor said. “Basically, you ‘turn on’ the terrestrial plants and the soil microbes earlier in the springtime, and they start taking up nutrients. During spring runoff, a lot of those nutrients aren’t flushed into the river.” If climate change — or any other global mechanism — is responsible for the recent appearance of didymo blooms, then current measures to cease its proliferation are useless at best, and harmful at worst.

In New Zealand, weekly treatments of affected waterways with a chelated copper solution have resulted in “significant localized trout mortality,” according to the study. Measured additions of phosphorus to waterways have been shown to decrease didymo blooms, but the method seems counterproductive as much of the world works to reduce phosphorus loading and eutrophication.

Ultimately, Taylor admits that the solution to the problem will remain unclear until its root and effects on ecosystems are better understood.

“We have pretty good evidence now from lots of areas of the world that the blooms and the year-to-year variation is linked to variation in climate,” Taylor said. “It’s just that we haven’t nailed down exactly the mechanism — and it could be a multitude.

“If it comes back to climate change, well, I think we know what the answer is, and a solution will require working across local and international government boundaries.”