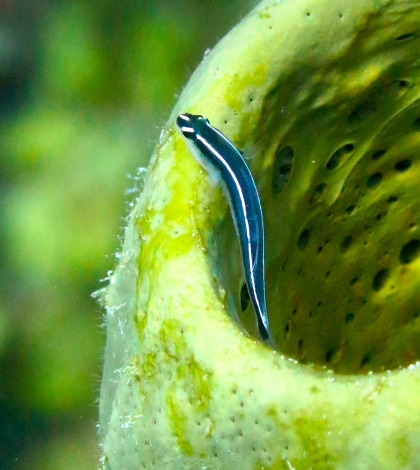 Neon gobies provide other marine creatures with a cleaning service that gets rid of parasites on their bodies. (Credit: University of California, Santa Barbara)

There are a lot of fish in the sea. And given its hard-to-predict wave actions, marine ecologists have for some time believed that larval fish got spread about with little disregard for where they ended up. But, at least for some species of fish like neon gobies, this assumption has turned out to be a false one.

Researching in the Barrier Reef of Belize, a large-scale study has found that neon gobies born in the reef don’t travel far from their parents. They stick so close, scientists say, that most of the larval gobies don’t go farther than 2 kilometers away. Because of the fact there there are thousands of goby species in the ocean, the find has wide-ranging implications for marine studies.

To investigate the dispersal dynamics of neon gobies, a team of scuba divers made trips along a 25-mile transect of the reef for more than three months. Their efforts involved catching the poor-swimming neon gobies that mostly stick to tube sponges.

“The key thing in this study was to catch as many fish as possible and do the work underwater,” said Cassidy D’Aloia, lead author of the study while a doctoral student at Boston University. She is now a postdoctoral fellow in the Department of Ecology and Evolutionary Biology at the University of Toronto. “It’s difficult not to hurt the corals, so we used slurp guns, which are not effective at catching most fish, but they are effective at catching tube fish.”

These guns worked by creating suction that would pull neon gobies out of the sponges for processing. At that point, researchers would take samples of the fish’s caudal fin, or tail fin, that D’Aloia says easily regenerates so that fish were left unaffected by the fin clip.

This type of scuba-dive sampling was carried out for both adult neon gobies and their offspring, with tissue DNA analysis revealing matches between the two. A GPS unit on the boat, employed by the captain, gave the scientists clear points where each fish had been collected. D’Aloia says that there were other, lower-tech gear used, like tubes to hold caudal fin samples and biodegradable tape. That was important for ensuring that divers didn’t sample any area twice during a trip along the reef.

“It was a really large field effort that took about three-and-a-half months. Six people were diving three times a day,” said D’Aloia. “There were probably over 200 fish collected per person on this project.”

But all the effort would pay off, as the study came to several important findings. For one, scientists were able to come up with a description of how the probability of dispersal for neon gobies changes as they move away from their source. In other words, they successfully described how far offspring typically move away from their parents.

D’Aloia stresses that, for this fish, the knowledge is an answer to one of the biggest marine ecology questions of recent decades. And it provides a valuable launching point for further investigation in the area.

“We’re interested in dispersal in all fish, but most work has been done on the gobies. And we can begin to answer some questions. The question now is can you scale it up to larger fish?” said D’Aloia. Some work has been done to solve that puzzle, she says, but not enough for any concrete conclusions. “It’s an exciting new area of research.”

The results also have implications for conservation efforts to set up ocean reserves that provide fish protection from things like commercial fishing or energy exploration.

“One thing that people designing marine reserves are interested in is how they’re connected. They want to know whether little fish travel between the reserves,” said D’Aloia. “For this species, these results show you won’t get much dispersal between generations. It’s important to know that other fish might behave the same. It’s a good starting point and, for this species, we understand the dispersal pattern quite well. But we need more info about other species.”

D’Aloia says that a lot of teamwork helped in completing the project. She credits many students and co-author Peter Buston, who was a postdoctoral scholar at the University of California, Santa Barbara, during the work. Buston is now an assistant professor at Boston University.

Funding for the project was provided by the National Science Foundation. Full results are published in Proceedings of the National Academy of Sciences.

Top image: Neon gobies provide other marine creatures with a cleaning service that gets rid of parasites on their bodies. (Credit: University of California, Santa Barbara)