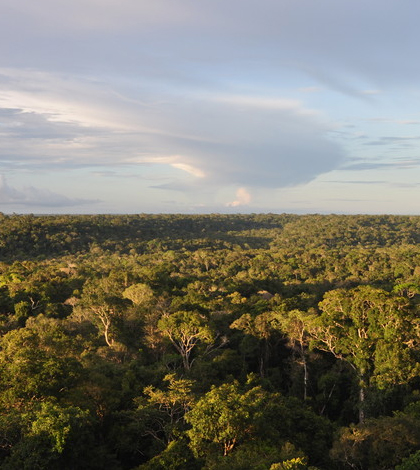 Canopy of the Amazon rainforest, with a storm cloud in the distance. (Credit: Marcelo Chamecki / Penn State University)

The destruction of rainforests around the world isn’t good for a variety of reasons. Loss of habitat certainly affects wildlife negatively, and the forests aren’t too quick about growing back. But new research completed by scientists at Penn State University points to the fact that losing rainforests may also be a bad thing for cloud formation and larger climatic conditions overall.

For some time, meteorologists have been intrigued by the fact that there are very few cloud-forming particles over rainforests. This left a gap where typical reactions would occur to form clouds. But yet, clouds still form over places like the Amazon Rainforest.

To dissect the dynamics of how the area’s clouds work, researchers at Penn State trekked to the Amazon in 2014. They were joined by other scientists from many other institutions, including those in the U.S. and others from universities in Brazil.

“We were in the middle of the rainforest,” said Jose D. Fuentes, professor of meteorology at Penn State. Most of the work took place a few hours from the city of Manaus in Brazil, he says, in the heart of the forest. There, scientists set up a 50-meter-tall observation tower to study the gasses that the trees exchanged with the surrounding atmosphere. The height of the forest at their study site was about 36 meters.

“We wanted to know how much ozone there is in the canopy and above,” said Fuentes. “We instrumented up and down the 50-meter tower to sample air chemistry at fixed levels.”

The tower’s instruments gathered data about once per second, Fuentes says, collecting measurements of gasses like carbon dioxide, carbon monoxide and sulfur, among others. Scientists also took measurements of precipitation in the form of rainfall, and released a tethered weather balloon that rose to a height of 1,000 meters to capture data on ozone, meteorological variables and aerosols.

All the gear helped researchers to make a few important discoveries. One was that deep, convective storms (that don’t produce lightning) can bring ozone molecules from the upper troposphere down to the surface, where they can mix and reach with other things.

Another find related to the large number of hydrocarbons, more than 25, that are naturally produced by the Amazon Rainforest.

“We already knew they were produced, but we didn’t know the whole picture, or the extent, that the rainforest produces molecules into the air,” said Fuentes.

The extent of ozone, he says, produces a lot of chemical reactions in the lower atmosphere that contribute to aerosols that enhance cloud formation. But before this effort, it wasn’t clear how they can influence or modify cloud formation.

The impacts of these results are clear, says Fuentes.

As for future research plans into the space, Fuentes says the findings have been published in a peer-reviewed journal. Up next is to modify numerical models to better predict where clouds will form or precipitation will fall.

“In the future, we want to use the results to improve our climate models,” said Fuentes. “We want to include the interaction of aerosols and sunlight to calculate sunlight attenuation to compute the net influence on local and regional climate.”

Top image: Canopy of the Amazon rainforest, with a storm cloud in the distance. (Credit: Marcelo Chamecki / Penn State University)