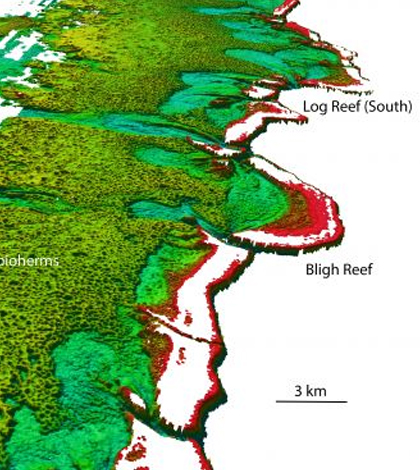 A LIDAR (light detection and ranging) mapping data effort led by Australian researchers has revealed a previously unstudied reef behind the Great Barrier Reef. But still little is known about the lifeforms that inhabit the region.

Laser imagery gathered from devices mounted to Australian Navy airplanes show great fields of unusual circular mounds, each 656 to 984 feet across and up to 33 feet deep at the reef’s center. Because of the shape of its mounds, some have taken to calling it a “donut reef.”

The fields of circular rings are Halimeda bioherms, large reef-like geological structures formed by the growth of Halimeda, a common green algae composed of living calcified segments. When they die, the algae form small limestone flakes that resemble white cornflakes. Over time these flakes build up into the large, reef-like mounds.

Scientists at James Cook University say that researchers have known about the structures since the 1970s but that no one had truly captured their full extent. They have been able to map more than 2,300 square miles of reef, outpacing previous estimates of its size by a factor of three.

The reef spans from Torres Strait to just north of Port Douglas and is susceptible to ocean acidification and bleaching just like the Great Barrier Reef. Investigators are interested in studying it further to find out how it’s been affected so far.

There is also interest in using the reef discovery as a way to learn more about past climate. Since the bioherm sediments are around 33 to 66 feet, scientists believe they hold around 10,000 years of history in their layers. They may hold significant insight relating to climate and environmental changes that the Great Barrier Reef has faced over its lifetime.

Full results of the mapping effort are published in the journal Coral Reefs.