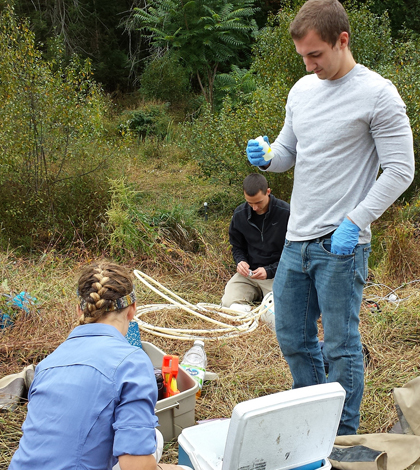 With the help of a dried-up Pennsylvania lake and a slew of monitoring tools, university students are learning about the effects of damming on an understudied shale watershed.

In 2008, problems with a nearby dam resulted in the draining of the man-made lake, leaving little more than a trickling stream and a ghost town of vacant docks and grounded watercraft. As part of the Susquehanna Shale Hills Critical Zone Observatory, students and faculty began researching watershed hydrodynamics in September 2013.

“The Susquehanna Shale Hills Observatory is unique as a research watershed in that it lies entirely on shale,” said Pamela Sullivan, postdoctoral scholar at PSU and the instructor of Techniques in Geochemistry. “Shale represents approximately 25 percent of the terrestrial land surface, but has not been intensively investigated.”

The research will help determine the influence of damming on surface and groundwater. As the dam is expected to be repaired and the lake refilled later this year, the researchers will have a chance to obtain a before-and-after report of the lake and watershed.

Sullivan and crew instrumented Lake Perez and its watershed to monitor groundwater levels, and barometric pressure and streamflow. The researchers used HOBO U20 pressure transducers at three locations to estimate streamflow over time. And to quantify stream discharge, the researchers applied modified USGS methods — a dozen monitoring points were equipped with SonTek FlowTracker acoustic Doppler systems and a Campbell Scientific current profiler. The students and faculty also collected water chemistry data. Electrical conductivity and pH were measured with a Mettler Toledo FG/EL2 and a Multi-Parameter PCTestr 35, respectively. The team took samples for alkalinity, oxygen and hydrogen isotopic analysis — to name a few — with a peristaltic pump under low flow conditions.

As might be expected in a geochemistry course, the study examined a number of a soil factors, including gamma radiation, mineral composition and taxonomy. Sullivan explained that Pennsylvania has long been affected by soil issues due to local industry.

“One Penn State graduate student discovered that the soils in the [Critical Zone Observatory] have too much manganese,” Sullivan said. “This element was probably added to the soils by atmospheric deposition from the locally heavy iron-making activity in the 18th and 19th centuries, as well as from more recent coal-burning and steel-making to the west.” The study is part of an ongoing research effort at Lake Perez. In the 1970s, researchers at PSU’s College of Agriculture studied the effects of acid rain and land use impacts, Sullivan said. More contemporary research has focused on an intensive understanding of the lake.

“Research from this current project builds on earlier work led by [associate professors] Kamini Singha and Michael Gooseff,” Sullivan said. They, too, aimed to quantify the watershed’s hydrodynamics, and also ran a workshop exploring stream and groundwater interactions.

Sullivan said that once the dam is restored and the reservoir is filled, downstream water quality will likely be affected by “the decomposition of the vegetation that has been dominating the lake bed since 2008.” Additionally, she and her colleagues anticipate a possible increase in groundwater discharge to the nearby stream.

“The long-term hydrologic dataset for this long-monitored site is unusual – and important for our understanding of anthropogenic impacts on ecosystems and hydrologic systems,” Sullivan said.