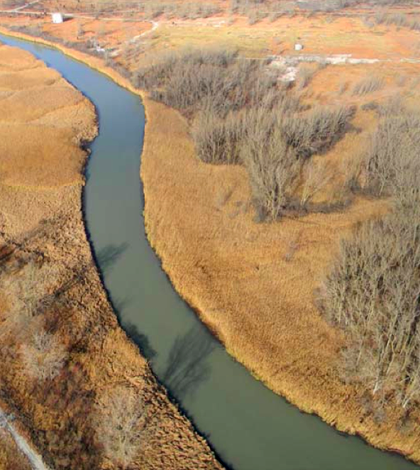 A segment of the East Branch Grand Calumet River near where dredging is underway to remove contaminated sediments. (Credit: SulTRAC)

Dredging is underway on the East Branch of the Grand Calumet River as part of an $80 million effort to remove contaminated sediment and restore habitat along the stream. Dredging began on August 1 and is expected to remove approximately 350,000 cubic yards of polluted mud from the river and soil from adjacent degraded wetlands.

The Grand Calumet River system drains a heavily industrialized region between Chicago and Gary, Ind., before emptying into Lake Michigan through the Indiana Harbor and Ship Canal. Much of the system is listed by the U.S. Environmental Protection Agency as a Great Lakes Area of Concern for its legacy of pollution, including polychlorinated biphenyls, polycyclic aromatic hydrocarbons and heavy metals.

The system has seen several sediment removal projects in recent years, including two on the river’s West Branch funded by the Great Lakes Legacy Act. The Legacy Act is also contributing $52 million to the current dredging effort, which will focus on a 1.8-mile stretch of the East Branch near East Chicago, Ind. The state of Indiana will contribute another $28 million that originated from an earlier settlement with area industry.

Two hydraulic dredges on the river will be pulling up sediment through 8-inch intake pipes, according to Richard Weber, vice president and principal engineer with Natural Resource Technology. Because the contamination runs so deep into the sediment, complete removal would be cost prohibitive. The project’s partners and their engineers have opted to partially dredge the tainted sediment and place a capping layer over the bed to isolate the remaining buried chemicals from the environment.

Four data buoys–one upstream and one downstream of each dredge–will track turbidity in the river to make sure the operation stays within a compliance level for total suspended solids.

Each NexSens MB-300 data buoy sports a YSI 600OMS V2 sonde with a 6136 turbidity sensor that will take measurements every 15 minutes. The data will be accessible in real-time through a NexSens WQData website.

Though the sensors measure turbidity, the compliance levels are established under total suspended solids. To make the surrogate turbidity readings useful, water samples from the river were recently analyzed for turbidity and TSS to develop a correlation between the two.

“We will use that to monitor in real time turbidity in the field to make sure that we’re not exceeding that TSS standard,” said Weber. The TSS standard is 50 milligrams per liter above background levels, which is determined by the buoy upstream of the dredge.

“If we do exceed that value above background and it is attributable to the dredging or capping operations, then we have to shut down activities and do something different such as applying best management practices to get back into compliance.”

The sediment cap will consist of a layer of sand and a commercial product called AquaGate, which is manufactured by Toledo-based AquaBlok, Ltd. The AquaGate product for this project will be fine aggregate with an outer layer of organoclay to ensure long-term cap performance. Crews from J.F. Brennan will apply the cap in thin lifts over the remaining soft sediment with the company’s patented broadcast spreading system.

Lower levels of contamination from the sediment has also infiltrated wetland soils along the river, and a large portion of the projected 350,000 cubic yards of material to be removed will actually come from the wetland excavation, Weber said. But the project’s benefits reach beyond vacuuming and digging chemicals out of the marshes.

“Another reason for dredging of the wetlands besides the contamination is the fact that they’ve been overgrown with phragmites, which is an invasive species,” Weber said. “And part of the money coming from the Legacy Act can be used for habitat restoration.”

Once the invasive phragmites are scraped away, Cardno JFNew, a restoration specialist company working for GLSR, will restore the areas with ponds and swales and replant them with native vegetation.

This project, which is expected to take around three years, is one of several in the works to help the Grand Calumet River recover from decades of pollution.

“This is only one of many segments that have already been or are scheduled to be addressed through the Great Lakes Legacy Act,” Weber said.

Top Image: A segment of the East Branch Grand Calumet River near where dredging is underway to remove contaminated sediments. (Credit: SulTRAC)