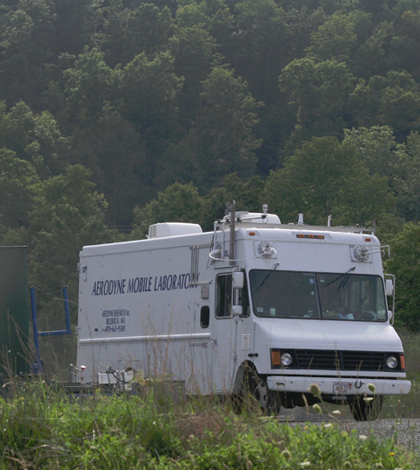 Lots of investigations have looked into the effects that drilling for natural gas in shale formations has on water quality. But few have studied its impacts on the air near or downwind of drilling sites.

With the lack of information in mind, scientists at Drexel University borrowed a research vehicle covered in air quality sensors from Aerodyne Research and went on a road trip. Their expedition covered various drilling sites within the Marcellus Shale region of northeast and southwest Pennsylvania. Along the way, they established a valuable set of baseline data that can be used to assess the impacts of fracking to air quality in the Marcellus region over time, as well as uncovered a few surprises.

“You can’t take what you see in one shale play and apply it in other shale plays,” said Peter DeCarlo, who serves a dual position as assistant professor of civil, architectural and environmental engineering and professor of chemistry at Drexel. “What you see in the Marcellus is not the same as what you’d see in the the Barnett or Utica (Shale regions).”

The Aerodyne mobile lab was equipped with instruments like mass spectrometers, trace gas monitors and particulate counters to measure a variety of air quality dynamics. These included methane, carbon dioxide, nitrogen oxides and carbon, among others. Researchers drove to 13 sites related to shale-drilling in 2012, but they didn’t just go to locations near wells. They also studied air quality around completion sites, where wells have already been dug; production sites, where natural gas is currently being extracted; and compressor stations, where natural gas is pressurized to make it ready for transport. Since they weren’t allowed to visit the sites directly, researchers followed a sampling protocol that focused on air slightly downwind of the operations.

“People are generally focused on drilling sites. And yes, they can create emissions, but they don’t extend for years and years,” said DeCarlo. “We wanted to get an idea of what impacts there could be to the whole Marcellus region.”

Methane, because it is a greenhouse gas, has been the subject of many investigations related to shale drilling. This work was one of the first to expand analysis to air pollutants that potentially have more immediate effects to human health.

“Methane is not locally an air quality issue. It’s a climate issue,” said DeCarlo. “The air quality emissions were lower than what we expected to see while the methane emissions were higher. That was kind of a negative find, that the climate impacts could be higher.”

The work was funded by the Electric Power Research Institute.