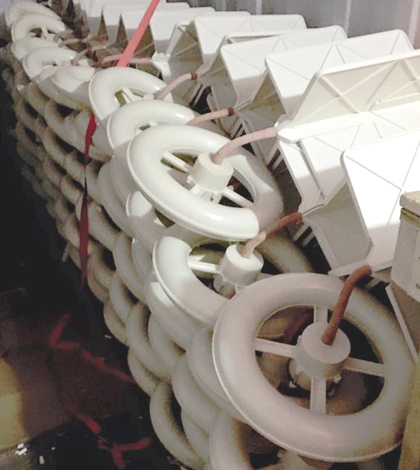 Drifters used in the LAgrangian Submesoscale ExpeRiment. (Credit: Consortium for Advanced Research on Transport of Hydrocarbon in the Environment)

In 2012, we watched as scientists with the Consortium for Advanced Research on Transport of Hydrocarbon in the Environment (CARTHE), funded by the Gulf of Mexico Research Initiative (GoMRI), launched hundreds of GPS-equipped drifters into the Gulf to track their movements. This was part of the Grand Lagrangian deployment, or GLAD, which was the largest of its kind ever at the time.

The researchers gleaned a lot of information on the movements of currents in the Gulf of Mexico, with an eye toward better understanding how the shifts can impact the transport of oil spills. Data from the effort were plugged into models, which have provided new insights for forecasting the transport of pollutants in the Gulf as well as helping first responders, like the U.S. Coast Guard, who seek to know more about the area’s currents for improved search-and-rescue missions.

Toward the end of that effort, scientists told us that they were working to develop biodegradable drifters to replace the ones they had been using. Fast forward to 2016 and that idea is fully functional in reality and central to a more recent experiment that researchers with CARTHE and their partners have completed in the Gulf: the LASER experiment, for LAgrangian Submesoscale ExpeRiment.

In the test, more than 1,000 biodegradable drifters were deployed in targeted ways throughout the Gulf. There were two large, dense deployments while other smaller ones focused on specific areas. Researchers deploy drifters during Phase 1 of the LASER experiment. (Credit: Consortium for Advanced Research on Transport of Hydrocarbon in the Environment)

Helga Huntley, an assistant research professor in the College of Earth, Ocean & Environment at the University of Delaware, is one scientist who aided in the work. She answered a few questions about the LASER project in this research note from the university.

The GLAD experiment revealed that small-scale ocean currents play a large role in the spread of pollutants at the surface, but still more data were needed for researchers to fully understand some of the physics driving the dispersion. In addition, the GLAD had been completed in the summer time, so scientists were interested in seeing if there were any differences with drifter behavior in the winter. That’s where the LASER deployment came in.

Two-foot tall drifters were deployed in the effort, each equipped with devices to capture velocity over the surface of the ocean. About 10,000 bamboo plates deployed alongside the drifters recorded differences between water masses that could play a role in the transport of pollutants.

This time around, the scientists also had a more comprehensive suite of measurements, including hundreds of miles of temperature and salinity sections from a towed instrument, about 500,000 very detailed images of the sea surface temperature field taken from aircraft, wave data from an X-band radar and measurements of vertical motion from 3D floats.

Researchers involved with the LASER effort are still parsing the data, but there are a few solid takeaways already. The drifters seemed to move very quickly after launch, likely caused by strong currents in the Gulf of Mexico. Several atmospheric fronts passing through the region during the early 2016 study period likely contributed to the drifters’ distribution as well.

Another finding, related to a theory on the behavior of ocean fronts, showed that the drifting objects collected into clusters and then broke up and separated into new clusters, consistent with the notion that fronts collect drifting things and spread them along themselves.

Those revelations and others apply to oil, but scientists say that the takeaways can apply elsewhere as well. For example, the models they’ve developed can also be used to understand how plastic moves in the ocean or for tracking the movements of algae.

Top image: Drifters used in the LAgrangian Submesoscale ExpeRiment. (Credit: Consortium for Advanced Research on Transport of Hydrocarbon in the Environment)