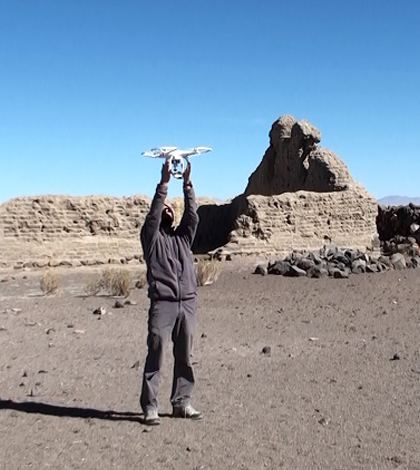 A researcher holds the drone in the middle of a survey area. (Credit: César Parcero-Oubiña)

Some 500 years ago, farmers living in what is today Chile’s Atacama Desert used terraced fields fenced in with rocks to plant and grow their crops. But after the South American region was conquered by the Incas, the invaders took over the area’s agriculture and began to centralize control of irrigation, as well as the methods those living under their rule practiced in growing crops.

The result was a rapid shift from one form of agriculture to another, as native farmers gave up their traditions of planting in terraced desert lands and began growing food along newly dug irrigation canals.

Today, a preserved terraced farm field in the Atacama Desert is a perfect example of the abrupt change, and a great place to study it.

Researchers with the Spanish National Research Council, University of Chile-CONICYT and University of New Mexico have completed fieldwork there, with UNM scientists handling the archaeological side of the investigation while the research council used drone technology to image the well-preserved field in 3D. The site provided scientists with an opportunity to understand how native farmers reacted to the takeover, compare differences between farming methodologies and see how the Incas reorganized agriculture to provide for the new territory.

“To extract resources and administer the region, they (Incas) expanded the road system, built new installations and stationed officials at existing political centers,” said César Parcero-Oubiña, a faculty member at the Spanish National Research Council’s Institute of Heritage Sciences and leader of the drone work. That likely came with a reorganization and expansion of irrigation agriculture, he says. The shift toward tributary production may also have changed the kinds of crops grown. An orthoimage of terraced farm fields in the Atacama desert. (Credit: César Parcero-Oubiña)

Aerial drones were the best method to get a clearer look at those suspicions. Unlike many other archaeological study sites, this one was already above-ground, and the drones offered time and cost savings over traditional surveying tools.

“We needed an easy, fast and efficient way to document in high detail the large number of archaeological features preserved in the area,” said Parcero-Oubiña. “So we decided to use drones for vertical photogrammetry.”

That process involved using a DJI Phantom drone with a mounted digital camera to capture images of the landscape. These were corrected for a uniform scale to produce what investigators call orthoimages. The images were then turned into three-dimensional models of the abandoned farm site.

The effort was one of scientists’ first soirees into drone flying, and the investigation wasn’t without a few hitches.

“Since we relied on affordable and simple tools, we had to face a few practical problems in the field,” said Parcero-Oubiña. These included the drone’s battery life and a few minor crashes during flight. “It was our first experience with the drones, but in the end it was highly successful and profitable.” A canal runs into farm fields once managed by the Incas. (Credit: César Parcero-Oubiña)

The effort yielded some useful findings on the terraced fields, including their size and other indicators as to how they were built. The average size of the terraces indicate that around 2,000 native farmers built more than 100,000 of them. Data also show how the Incas’ arrival changed the landscape, as fields appeared to be built using new approaches and the use of new cultivation methods was evident.

They found nearly 150 acres of fields and terraces in the region and more than 6 kilometers of irrigation channels. These features are plainly evident in the drone-collected images.

“The water management was extremely efficient, in spite of the very simple technology available at the time, basically stone tools, no metal and no wheeled vehicles,” said Parcero-Oubiña.

He hopes that those and other data collected will help build a detailed record of the Atacama fields, including how they were built and how they changed over time. From there, he hopes to build more detailed digital elevation models.

Alongside the American and Spanish scientists, the indigenous Ayquina-Turi and Cupo communities also aided in the work by allowing researchers to survey in their ancestral sites.

Top image: A researcher holds the drone in the middle of a survey area. (Credit: César Parcero-Oubiña)