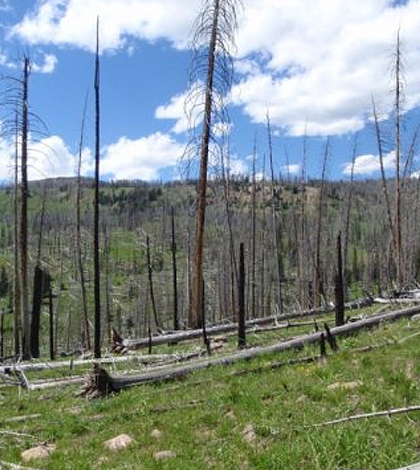 While many tree species are well adapted to fire, recently Rocky Mountain trees have had more difficulty recovering from fire than in the past, according to a release from the University of Wisconsin-Madison.

Scientists at the university gathered data from 184 sites from 1994-2003, before and after 11 wildfires passed through. Data included the condition of the forest groundcover as well as species, size and age of trees in the forests. Forest stand information was also collected, such as whether trees were on cooler north-facing slopes or warmer and drier south-facing slopes. Information was obtained from close to 10,000 seedlings.

Generally, scientists found that severe drought conditions following fire had the largest impact on seedling survivability. Recovered tree density following a fire in 2000 was 10 times lower than after a comparable fire in 1988, for example.

Scientists say that stunted recovery has been due to drought conditions following fire events. The conditions seem to be exacerbated by climate change, researchers believe.

The study was the first to show that climate change is altering post-fire conditions and tipping them toward more severe drought.