How Drought-Stricken Arizona And California Can Increase Groundwater Supplies 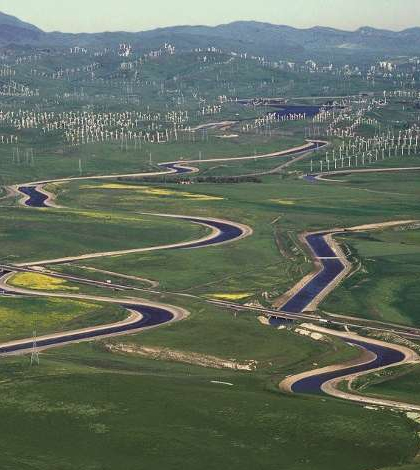 The California Aqueduct (left) and the Delta-Mendota Canal (right) wind through California's Central Valley. (Credit: U.S. Department of the Interior)

Although Arizona and California have experienced significant groundwater depletion as droughts have continued for years, an opportunity exists to better store surface water during floods, resulting in less stress on existing groundwater supplies, according to a study spearheaded by University of Texas at Austin scientists.

For Arizona and California, periods of drought are interspersed with flooding, and by using depleted underground water reservoirs to store excess surface water during wet periods, water managers have been able to mitigate the loss of groundwater during persistent drought.

The study utilized groundwater data from the past several decades in California’s Central Valley and central Arizona. Areas which used managed aquifer recharge had a significantly higher amount of stored water than areas that did not.