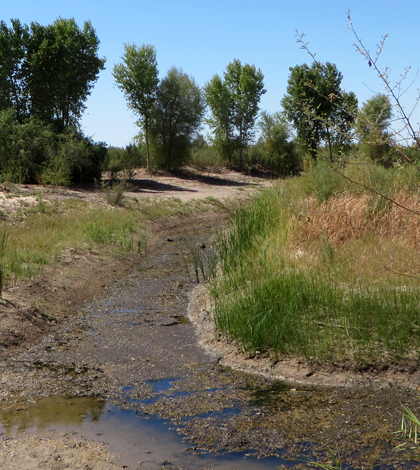 On March 23, 2014, a pulse of water 130 million cubic meters in volume flowed from the Morelos Dam just south of the U.S. – Mexico border through the lower Colorado River delta. Part of a hydrological experiment unprecedented in scale, the release was designed to bring temporary — but hopefully telling — relief to the parched delta. With the earliest results coming in from the ongoing project, researchers are beginning to understand just how beneficial a (relatively) small water pulse can benefit a water-starved region.

Getting the water downriver necessitated more than just an open floodgate. Universities, government agencies and nongovernmental organizations came together from both sides of the border to prepare for the pulse, and to monitor its continual impact. But keeping all those personnel — not to mention the equipment — on track wasn’t a cakewalk. That’s where Karl Flessa comes in.

“Over the years I guess I became one of the better-known Americans working on the delta,” said Flessa, a professor in University of Arizona’s Department of Geosciences who’s worked in the Colorado River Delta since the mid ‘90s. “I was one of the many people who got involved in [the pulse flow] project from the start, and became, lo and behold, the co-chief scientist of this effort.”

It’s always a challenge to organize projects with many participating entities, but even more so when international borders are involved, Flessa said. The crux of the project, however, was establishing a dataset that would paint a detailed picture of any change in the delta following the pulse.

“One of the key things that we really had to do, and are still doing, really, is assembling baseline information,” Flessa said. “If you want to know how things change, you have to have it pretty well-documented how things are.”

The project’s scientists monitored groundwater levels, surface water flows, vegetation and bird populations using everything from satellite scans to plane imagery to old-fashioned eyes on the ground. Once the baseline was established, Morelos Dam released the pulse over an 8-week period. Scientists “chased” the surface water to observe its immediate effects on the landscape. Researchers released a pulse of water from the Morelos Dam to help stimulate the parched delta. (Credit: Karl Flessa)

Now, Flessa’s team is looking at any changes that have arisen in the delta over the past nine months. They’ve deployed more than 100 piezometers to study groundwater levels, and are employing data loggers to gather conductivity data downstream, as well as flow trackers to measure discharge. Not limited to traditional monitoring gear, Flessa says the scientists monitoring local birds use boomboxes to send out mating calls and wait for a response.

Flessa noted that it might take some time to see notable effects in bird populations, but the pulse has already impacted certain aspects of the delta. Immediately after the release, Flessa said local Mexican communities showed a strong response by celebrating the return of their lost river.

“There were some kids playing in the river who had never seen a river before,” he said. “Big parties, lots of barbecues, lots of beer — lots of celebration.”

While the monitoring program is ongoing, and will observe changes to vegetation, bird populations and hydrological parameters over the next five years, Flessa said the initial results are looking hopeful.

“We have seen what you would call a positive hydrological and biological response to the pulse flow.”