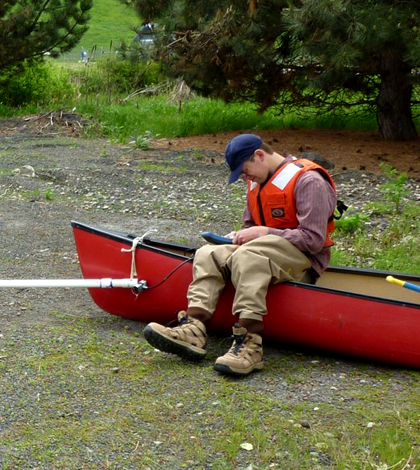 Scientists with the Washington Department of Ecology know that the tools used for sampling any river largely depends on the characteristics of the river itself. And for Hangman Creek, which runs through the state’s eastern portion, the best tool to study it is a canoe.

Why? Well, it has to do with the river’s size. Sampling a smaller river like Hangman Creek is easier done with a canoe because the craft provides a sturdy, yet still light and manageable, platform from which researchers can do their work.

Scientists with the agency took advantage of the craft’s utility in a recent work to gather data for use in developing a Total Maximum Daily Load for the creek. The effort saw them paddling down the river, as well as in the nearby Rock Creek tributary, over about eight days with a Hydrolab MiniSonde deployed in a custom, 20-foot deployment pipe. The device recorded parameters including conductivity, temperature, depth, dissolved oxygen and pH.

“People at our agency have done this type of work with rafts, small outboard motors, inflatable kayaks, but they barely hold the setup,” said Tighe Stuart, a surface water modeler with the agency. “With a canoe, there’s enough room for electronic equipment.”

Stuart says that he was able to strap in a small cooler in the front of the canoe using bungee cords that served as a small desk for a Hydrolab Surveyor, a handheld device that logged the data. And in the back, there was enough room for a second crew member. Water flows past a large rock on Hangman Creek that shows how much higher spring flows were a few weeks prior. (Credit: Washington Department of Ecology)

That turned out to be important for a number of reasons. For one, you have to have at least two people to navigate a canoe. But as Stuart found out, it was necessary to pull the canoe out of the water a few times, due to shallow depths, which meant scientists had to hoist the craft on their shoulders and carry it to the next launch point.

“We were dragging a big Hydrolab, which sort of acts as an anchor,” said Stuart, noting he and others sometimes couldn’t help but come to a stop. “The whole Rock Creek was 16 miles. We walked 2 or 3 miles of that.”

Though there were some shallow spots, Stuart and others found that Hangman Creek was much deeper in places than they had guessed it would be. There was also a lot of variability: Some spots were as deep as 3 meters (9.84 feet), while others were as shallow as 0.1 meters (3.9 inches).

“I knew it would be variable because we had done this same sort of exercise on the Palouse River. It’s nearby, a larger river, but much shallower,” said Stuart. “I was surprised by how Hangman Creek was much deeper than the Palouse even though they’re in the same system.”

That knowledge on depth is the most significant for modeling efforts to follow.

In the future, he and others hope that breaking down that relationship will help to inform the development of a Total Maximum Daily Load for the water body, ultimately resulting in improved aquatic habitat in the river.