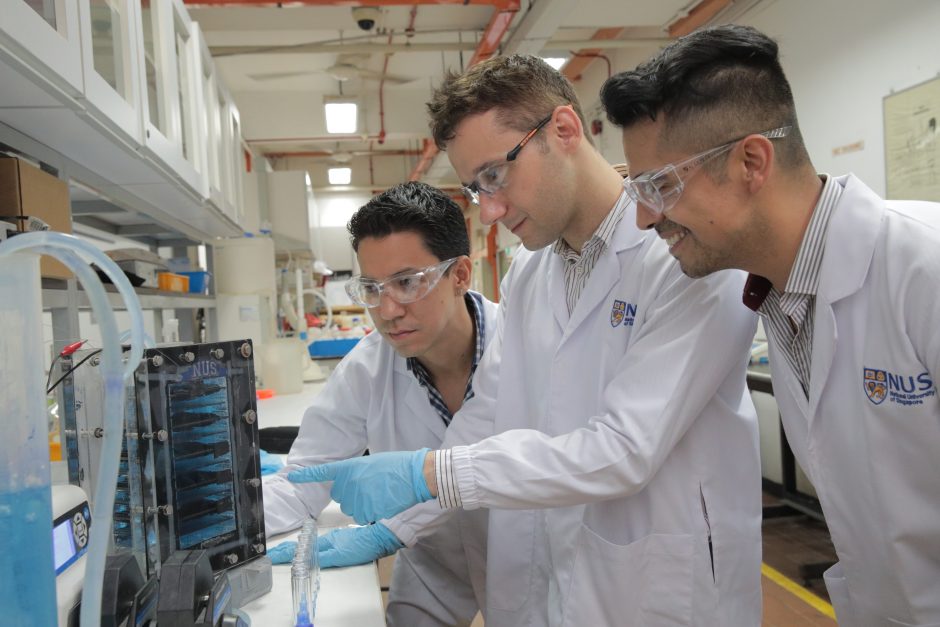 The research team in the lab. (Credit: National University of Singapore.)

Wastewater treatment plants face different obstacles, but there are some shared challenges that all operations face: the need to minimize energy consumption; the production and disposal of excess sludge; and the costs of operations, even beyond power. Researchers from the National University of Singapore (NUS) have developed a new system for wastewater purification that targets each one of these challenges head-on, using electricity as a reagent for purification.

Wastewater treatment has advanced significantly in recent years. However, it remains expensive and difficult to remove refractory organic compounds which occur in detergents, byproducts from electronics plants, pharmaceuticals, pesticides and herbicides, and personal care products. The NUS team took on this challenge with the goal of creating a wastewater treatment system that can treat these compounds in an environmentally-friendly way for a reasonable cost, and set a new standard in the industry.

“At the moment, there is no gold standard for the treatment of biorefractory industrial
wastewater,” explains the lead researcher on the team, Assistant Professor Olivier Lefebvre from the NUS Department of Civil and Environmental Engineering.

The new NUS system completely mineralizes all organic pollutants electrochemically, degrading them into carbon dioxide and water. It can be integrated into existing systems, serving as a pretreatment stage for current wastewater treatment schemes, and will work well in conjunction with biological treatments, membranes, and other purification methods.

Better still, the system operates efficiently, using low power. The approach uses electricity as a reagent for purification and does not demand the addition of chemicals into the system—another point of cost and times savings.

“It’s based on the hydroxyl radical technology, which is one of the strongest oxidants,” explains Lefebvre. “It is produced at the surface of the electrodes.”

First, untreated water is pumped into the chamber of the system. In the chamber, electrodes generate hydroxyl radical and hydrogen peroxide that react with complex organic compounds in the water until they are entirely consumed. In the process, they break down the organic contaminants (as well as themselves) into simpler molecules. Eventually, nearly all molecules in the chamber degrade into carbon dioxide and water as the method removes up to 99 percent of even difficult to treat organic compounds, including “phenol, emerging contaminants, solvents, sludge, and others,” Lefebvre states. The purification system created by the team. (Credit: National University of Singapore.)

The electrochemical system can also mineralize and remove inorganic compounds, according to the team. “I only deal with organic pollutants at the moment, even though the technology could be tweaked to deal with other compounds,” Lefebvre confirms.

Meeting the need for treated water

Many modern industries, from agriculture and mining to electronics and pharmaceuticals, require massive volumes of purified water for their processes. Demand for high-quality water comes with a desire to reuse water and avoid waste through wastewater reuse and recycling—a global market that will be worth in excess of $22 billion worldwide by 2021.

Applications for the process will probably appear in various industries, because the system is so easy to use and cost-effective. It has the potential to liberate various users from the need for third-party disposal or processing, and because it doesn’t need the addition of any chemicals, the long-term cost savings is notable.

“We are expecting our system to be cheaper than chemically-based technologies because
of improved mass transfer. This is even truer if we use solar panels as the source of electricity,” Lefebvre asserts. “Our system is targeted at small businesses. It is very easy to operate, just switch it on!”

Lefebvre and his team are now testing the system with different types of wastewater and refining the design as they wait for their patent applications to make their way through the legal process. They aim to optimize and refine the design, creating a system that’s even more efficient in the end. They are also searching for the right industry partners, in the hope of commercializing their innovative technology; they expect it will be commercially available within “a couple of years.”

Top image: The research team in the lab. (Credit: National University of Singapore.)