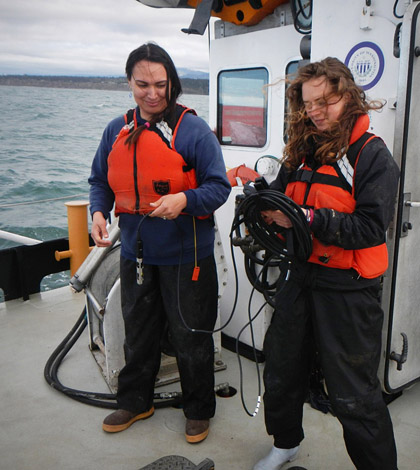 Students deploying an oxygen sensor from the deck of the R/V Barnes on the Elwha delta. (Credit:Emily Eidam)

When the largest dam removal project in history was set to begin on the Elwha River, poised to release thousands of tons of sediment locked away for decades, scientists at the University of Washington saw a need to investigate. For the Strait of Juan de Fuca downstream, no one was sure what such a highly concentrated flow of sediment could mean.

Plenty of students were interested in the high-profile project, so university officials put together a 10-week, investigative course to meet both their needs and those of researchers looking for answers.

“The class gives a good introduction to the basics while bringing in the things they’re interested in,” said Andrea Ogston, professor of oceanography at the University of Washington. She has taught the class since it began, instructing students whose majors span the environmental fields.

In 2008, Ogston and others taught the first class with the expectation that the dam removal would begin that year. But with regulatory issues stalling, the project was held up until September 2011. Data from the first class don’t reflect any high-concentrated sediment flows, but they do provide a baseline for comparison that is important today. Students and faculty discuss the deployment of a short term mooring to study the attenuation of light reaching the seabed due to sediment in the Elwha River plume. (Credit: Emily Eidam)

Since work began to remove the dam, students have taken up residence in UW’s Friday Harbor Labs every year to take the specialized course. “It’s the only course they take at the time,” said Ogston. “They’re immersed in science, which really helps them get the ins and outs and hit the objectives of the course.”

A great deal of what students do is data collection, sampling the Strait of Juan de Fuca with conductivity, temperature and depth sensors to profile its water. Photosynthetically active radiation sensors and Hobo light intensity loggers help them find boundary layers in the strait. Acoustic Doppler current profilers give insights into water movement, while box corers are used to take samples of sediment settling in the seabed.

What’s neat for students beyond learning how to collect environmental data is the ability to choose research projects based on their interests. Ogston helps guide students to keep the 10-week investigations practical, but the rest is up to them. A few, for example, have delved into the strait’s benthic biology or light attenuation in its wake. Students cleaning the long-term tripod, which has been deployed almost continuously for three years and is cleaned and downloaded approximately every 4 months. (Credit: Emily Eidam)

In the meantime, a doctoral student in Ogston’s lab is using the data in dissertation work. Figures from the dam removal’s first two phases are included so far, and there are already some surprising finds.

“This is a place where the tides are strong all the time,” said Ogston. “And we didn’t realize how strong they were.” With every tidal cycle, says Ogston, the strait has been able to redistribute the highly concentrated sediment pulsing from the Elwha River without difficulty.

But with the last piece of the dam expected to come down this fall, Ogston and her students are excited to see what it’s holding back. “What will come out next?” said Ogston. “The fall and winter streams and floods — we think these could be some of the biggest sediment flows we’ve seen.”

Top image: Students deploying an oxygen sensor from the deck of the R/V Barnes on the Elwha delta. (Credit:Emily Eidam)