Emerald ash borer, a prolific invader, has spread to a new tree 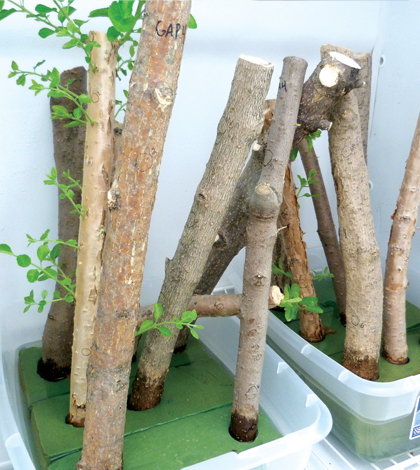 In 2002, Detroit was ground zero for the emerald ash borer invasion, as the shiny green beetle pushed its way in on poorly treated wood packing material that carried goods from eastern Europe and Asia. The bugs were probably dormant larvae at that time, resting until conditions were right to chew their way out.

And when they did, it wasn’t long before they found ash trees like those they loved in Asia right here in the United States. They preyed on the trees near Detroit first, and from there expanded into untouched territories including Illinois, Indiana and Ohio. Within a decade, emerald ash borers were found in much of the U.S. Midwest and Northeast, all the way from Kansas to New Hampshire.

That the emerald ash borer can spread quickly isn’t surprising. What is, however, is the way they do it. The beetles can’t expand that rapidly on their own, and only extend their range by about a kilometer per year naturally. But when people don’t treat wood by spraying it with pesticides or drying it out, emerald ash borers can make huge geographic leaps, like their emergence in Denver that came out of nowhere and other sightings in Arkansas and Louisiana.

Unfortunately for those trying to stop the expansion of this resourceful invasive species, emerald ash borers have been found in a new tree: white fringetree, a close relative of ash. That discovery was made by Don Cipollini, professor of biological sciences at Wright State University. Don Cipollini pulls tree samples out of an incubator in his lab. Strips holding emerald ash borer eggs are applied to each one to see which tree species the insect can live in. (Credit: Daniel Kelly)

“They had tested the leaves of this tree early on for suitability of the adults because adults feed on the leaves. But that’s not a big issue; it’s what the larvae feed on that’s really damaging,” said Cipollini during an interview in his lab. “For some reason, that step was never examined back then. And that lingered in my mind, this question about white fringetree.”

Luckily for Cipollini, who lives near Yellow Springs, Ohio, one of the trees was growing right in his backyard. From there, he started to look around the Dayton area in 2014 to find where other white fringetrees were planted. There were about 10 in public areas around Yellow Springs, as well as a few others in private yards.

“So I just said, ‘This summer, this is the summer I’m going to go out and address that question: Is emerald ash borer using this species in the field?’” said Cipollini. “I just simply went out, starting from one end of the Little Miami Bike Trail in Yellow Springs examining the trees, just visually, and inspecting the trees for evidence of an attack.”

The telltale signs of an emerald ash borer attack include dried and shrunken stems with D-shaped holes where adults have chewed their way out. Cipollini also noted cracked bark and signs that trees were dying back, like epicormic sprouting: new stems sprouting at points below the attack sites to compensate.

The first few white fringetrees that he checked looked unattacked.

“So I’m three trees in, thinking maybe there’s nothing to this,” said Cipollini. “Then I walked up to the fourth tree.”

That white fringetree, hiding in plain sight beside a popular public bike path, was harboring emerald ash borer. Cipollini began collecting evidence to prove his find, and would go on to survey 16 more white fringetrees near Dayton. A total of five of those were found to show signs of emerald ash borer attack, but the very first one was special: It carried a dead adult male that was key to proving the insect was what Cipollini thought it was. A D-shaped exit hole shows where an emerald ash borer has exited this branch of white fringetree. (Credit: Daniel Kelly)

“As this thing dried after I’d collected it, six weeks later I went to look for it, and right in here was a trapped adult,” said Cipollini, pointing to the winding, larvae-chewed feeding gallery where the adult once lay. “I could see it in there. I dug it out and that led to the positive identification of the beetle as emerald ash borer.”

Scientists with the U.S. Department of Agriculture’s Animal and Plant Health Inspection Service gave their official stamp of approval on Cipollini’s findings. It was the beginning of a whirlwind of additional study, traveling, presentations and conferences to discuss his findings, in addition to publishing his results in the Journal of Economic Entomology.

“I don’t think people were looking, frankly. It could have been anybody that decided to do this,” he said. “It just happened to be me.” Another factor that may have slowed the discovery is the fact that many trees don’t show visible signs of attack until it’s too late.

Cipollini’s hypothesis is that white fringetrees are a good target for emerald ash borers because they share similar chemical signatures that ash borers can key in on. The trees are among the most closely related trees to ash in North America even though they don’t look like them.

The similarities between the two trees brings up another question: Could emerald ash borers spread to other closely related trees? After all, both ash and white fringetree are members of the olive family, says Cipollini.

Unfortunately, the answer could be yes. If white fringetree is susceptible, then other trees in the olive family that look and smell just like it may be too. Trees like the pygmy fringetree, swamp privet, cultivated olive and devilwood.

“So this type of understanding helps guide what to pay attention to,” said Cipollini, pointing to the closeness of each species on a chart showing similarities between their evolutionary paths. “What’s next on the menu? That’s the reason for the focus on these species over here. If this one can be attacked, then it’s quite possible that this one and this one, and so forth, can be too.” Don Cipollini opens a rearing barrel holding borer-infested white fringetree. If the borer larvae grow into adults, they will try to escape and get caught in the clear container on top. (Credit: Daniel Kelly)

Cultivated olives are important economically for fledgling olive industries in Florida and well-established ones in California. And, of course, olives aren’t just grown in the U.S. Growers in Europe may have to be on the lookout for ash borers in the future.

Cipollini believes the emerald ash borer will make it to Europe eventually (it is in Moscow right now), much the same way it made landfall in Detroit. And as the insect’s effects have already been felt here in the U.S., Europe will have to deal with them too.

The ecological damage is also important. If borers attack and kill white fringetree like they do ash, they’re removing another tree that pollinators visit. “Bees and other insects service these flowers and obviously they make these olive-like fruits in the fall that birds eat, mammals eat,” said Cipollini. “So there’s this wildlife value to the plant that would be affected if it gets killed back.”

But before that scenario plays out, Cipollini says more investigation needs to be done to understand how the beetle is making its moves. Uncovering that will help regulators like those at the USDA Animal and Plant Health Inspection Service plan for minimizing the damage.

To get at the question, Cipollini’s lab is equipped with rearing barrels that hold borer-besieged white fringetrees he found during his studies. By simply bringing the infested trees into his room-temperature lab, he is speeding up the ash borer development process and can see if live adults emerge from them or not. There is also an incubator that holds branches from several tree species believed to be at risk, each bound with small strips of ash borer eggs. In a work related to the initial discovery, he’s monitoring which tree species ultimately provide livable environments by checking for feeding galleries that hatching larvae leave behind.

So far, he has confirmed white fringetree is an acceptable host for emerald ash borer larvae. And so is devilwood, which supported the development of a few larvae. In green ash, he found that larvae appeared to grow faster than in white fringetree, but with similar numbers of surviving larvae. The results were different for a species of Chinese fringetree, which did not support larvae growth. Cipollini says that the tree may have a shared evolutionary history with the emerald ash borer in Asia and possess effective defenses against it. And more work is planned on olive trees, with Cipollini sourcing stems from California for study.

The full results of his second investigation are slated to be published soon in the journal Environmental Entomology.

“What I’ve learned is that, more or less, these trees (white fringetrees), they’ll all get attacked when beetle densities get high enough,” said Cipollini, while walking along the bike trail in Yellow Springs. “It doesn’t mean they’ll die of it, but I think they’re all gonna get tested.”