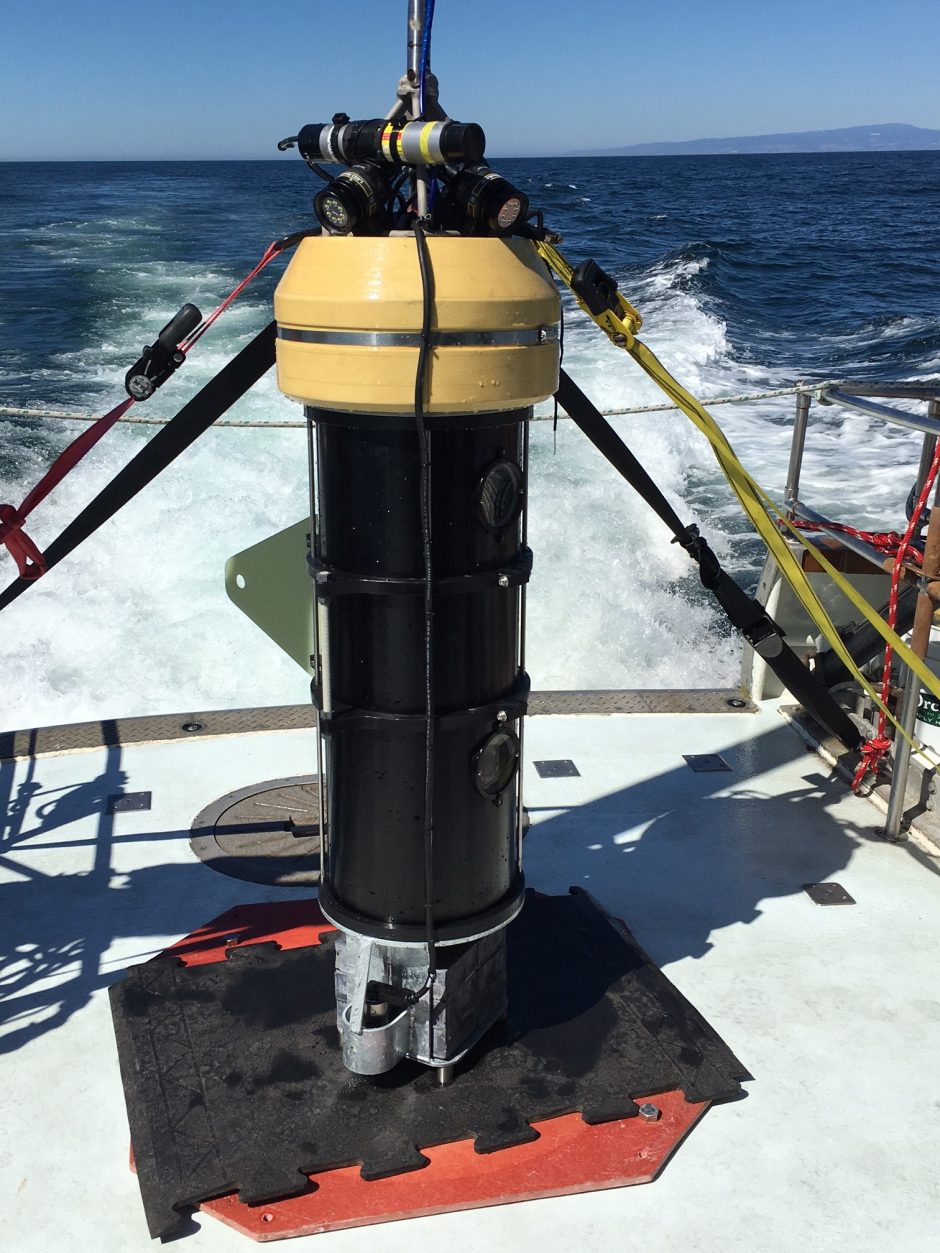 Pacific rockfish is a kind of catch-all term for many different species of fish that tend to swim and hide among rocks at the floor of the ocean near the coast. More than 90 species of rockfish are fished along the US’s West Coast, and their popularity has led to severe overfishing for some species. Scientists are working to aid threatened and endangered populations, but this isn’t always an easy task.

A fundamental aspect of the conservation effort involves counting the fish that are present in overfished areas, and measuring them. This allows fisheries scientists and managers to regulate commercial fishing practices and set limits on how many fish can be caught each year, where fishing should take place, and how fish are responding to protective measures. However, counting and measuring fish like the yelloweye rockfish and the cowcod, which live 50 to 500 meters below the water’s surface and dart expertly behind walls of rock in an instant when they feel threatened, has posed an ongoing challenge for scientists—one that experts have been working on for some time.

Dragging trawl nets along the ocean floor has been only marginally successful for obvious reasons related to the rocky terrain preferred by the fish. Hook-and-line fishing is slow and spotty, and thus another impractical option. Scientists hoped to seize the power of technology and lower camera systems to the seafloor in hopes of getting panoramic views of the fish in their preferred environs. However, they found that existing camera systems were awkward and heavy to move, and unstable in the rocky areas loved by their subjects. Their efforts were further stymied by the slow progress of the cameras’ rotation cycles.

Moss Landing Marine Laboratories (MLML), The Nature Conservancy (TNC), and other organizations approached the MBARI team about collaborating to design a new camera system for their ongoing rockfish preservation goals. Being specifically designed for this particular purpose, the camera needed to meet a number of precise needs in order to get the job done—and that’s what makes it unique. MBARI electrical engineer Chad Kecy, who has previously designed and developed a unique underwater camera system called SeeStar, headed the team who created the Benthic Observation System (BOS) for conserving rockfish. “While both the SeeStar and BOS are imaging systems, their intended uses and operational requirements differ greatly,” remarks Kecy. “The SeeStar system is meant to be deployed autonomously for days to weeks at a time, so its physical size and electrical power consumption needed to be minimized. The BOS, on the other hand, is meant to be launched in rocky environments and provide real-time stereo video. So, from a mechanical and electrical standpoint, the two systems have widely divergent designs.”

Therefore, although there was some general overlap between the two underwater imaging systems, the BOS system began with the elusive rockfish it was intended to track.

“What makes the rockfish difficult to monitor is the fact they live around rocky features underwater,” Kecy details. “Trawling does not work, and most camera systems don’t work well in these environments. Our system was designed specifically to work in these hard to reach areas of the seafloor.”

These qualities were just the beginning of the project’s complex parameters.

“The researchers were looking for a platform which could be launched from various ships of opportunities,” explains Kecy. “This meant that the final system had to be semi-portable and fairly easy to get onto and off of ships. It also put some limitations on the electrical interface to the BOS; not all ships have the same electrical power available as others. A survey of potential ships had to be performed initially to help set the bounds on the power available for the BOS to use.”

This wasn’t the end of the list, however; the BOS had unique requirements for its time underwater as well.

“First, it has to be lowered to the spot of interest while minimizing the disturbance of the fish to be monitored,” details Kecy. “Likewise, the BOS is towed from site to site underwater. Both of these requirements led to the narrow, hydrodynamic mechanical design. The BOS also needs to be able to land on or near rocky outcroppings without tipping over or sliding. This requirement was met by attaching sufficient flotation on the top of the lander, and extra weights on the base.”

Kecy and the MBARI team used an engineering process to approach this problem. This kind of process was essential given the broad range of design parameters and objectives they were tasked with meeting.

“Initially, this project had four co-Principal-Investigators, each with differing functional requirements,” Kecy describes. “Some required an autonomous standalone platform while others needed a tethered system. We held an extensive preliminary design review (PDR) to address these issues, and decided to branch off and create two separate projects. This narrowed the design space down and led to a more focused solution.”

The team was working against a time constraint in that there was a pre-scheduled deployment set in the fall, giving them less than six months to put together a working system. For this reason, the team decided to limit the number of cameras to two, rather than eight. This two-camera concept reduced the number of big decisions to make and simplified the overall design in many areas, and allowed the team to produce a proof-of-concept for various mechanical and electrical designs. Technologically, the BOS is sophisticated. It uses AC power supplied by the ship that deploys it.

“We feed the ship’s 110Vac into a 1:4 step-up transformer in our shipside electronics,” Kecy explains. “A 4:1 step-down transformer in the subsea lander converts back to 110Vac. The use of 480Vac through the tether helps minimize resistive losses.”

A pair of cable modems, one topside and one in the lander, provide communications capabilities.

“A pair of custom made Bias-Tee network allow the RF and 480Vac to be transmitted down a single coaxial cable,” Kecy details. “This coaxial cable is no different than the ones found in residential areas, other than it has an outer jacket that allows it operate down to 300 meters underwater.”

Obviously, the system’s real-time video capabilities are the real prize. Live video from the two measuring cameras and the downward looking camera topside is transmitted and recorded directly on the camera’s microSD cards.

“We wired the camera’s USB ports to a connector on the lander, and with a special cable, can retrieve the videos without opening the housing between deployments,” Kecy adds. “A series of clips and velcro wraps are attached to the coaxial tether and the Spectra line to keep them together and prevent tangles while underwater.”

The video is high quality, and frame grabs from it can serve as still images. The make and model of the cameras on the two-camera version of BOS are the Sony A6300.

“Our next step is to design and build the eight-camera version of BOS,” Kecy remarks. “Because we have nine HD video streams being transmitted from the subsea lander to the ship, a fiber based tether makes the most sense. The research team also wanted to streamline the launch and recovery process, so a load bearing tether is also going to be used. This also entails specifying and ordering a complete launch and recovery system including a winch, fiber-optic slip-ring, sheave, and tether.”

This is a tall set of orders for another whirlwind deployment that’s set for this fall. However, despite the tight schedule, Kecy and the team have learned enough from the two-camera prototype to ensure that the process this year should be fairly smooth.

After fall, the BOS system could go in a number of different directions; it has the potential to work with other sensory equipment and could be deployed in a variety of scientific contexts.

“One aspect of this system which hasn’t been emphasized much is its ability to have additional contextual sensors added on,” Kecy comments. “We built in extra power and serial port connectors on the housing which allow for instruments such as CTDs, pH probe, Oxygen sensors, etc. Software drivers would need to be written for any specific sensor which is used, and the initial deployment last fall did not require any additional instruments, but the ability is still there.”