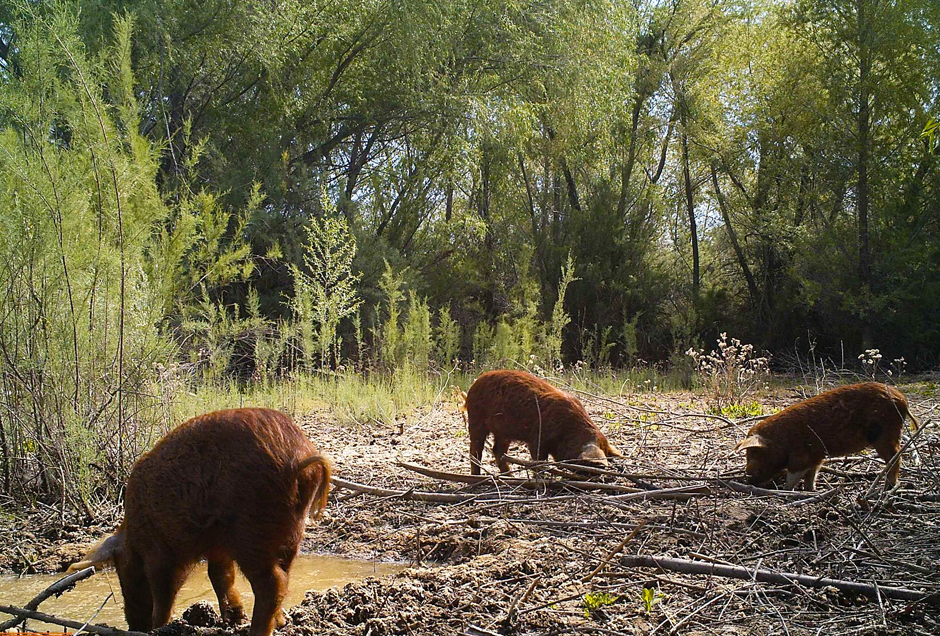 Feral swine cause erosion by rooting and wallowing on a national wildlife refuge in Arizona and California. (Credit: US Fish and Wildlife Service)

When pigs get out of their pens, they can really tear up a landscape. Five million pigs in 39 states can tear up a lot of landscape.

“They’re one of the top 100 invasive species in the world. Anywhere wild pigs are not natural and they show up, they do a lot of damage to other species,” said Dwayne Etter, a research specialist with Michigan’s Department of Natural Resources and a part of a research team that tested a new feral swine monitoring technique that uses environmental DNA.

Environmental DNA (eDNA) is genetic material organisms lose in the environment. If a pig crosses a creek or defecates in it, a researcher, in theory, should be able to pull that DNA out of the water further downstream. The DNA can then be identified and used as evidence that pigs are present upstream.

Etter’s team demonstrated this was possible and tested various stream conditions to find those best suited to this technique.

Feral swine’s affinity for Michigan’s waterways and wetlands is part of the problem they pose to the environment, Etter said. Rooting and wallowing in and around streams and wetlands can harm water quality and speed erosion. That’s trouble for wildlife that need clear, clean streams, like trout. Swine can transmit diseases to other animals and humans and they compete with other wildlife for food. Like their domestic counterparts, pigs will eat anything.

Though this technique is still in the testing phase, researchers looking at eDNA in streams could efficiently and effectively monitor swine over larger areas than what is now feasible, Etter said.

With eDNA tools, a researcher could locate pigs by sampling streams near the road. With enough samples, they could get a fairly clear idea of whether or not feral swine were in the area without going off-road.

It would be much more efficient, effective and cheap than other typical monitoring methods such as driving or flying around an area looking for physical evidence of rooting or wallowing.

Because eDNA techniques would allow researchers or government officials to effectively monitor larger areas of land, they could be useful in the effort to find small groups of feral swine before their population grows to really problematic sizes. 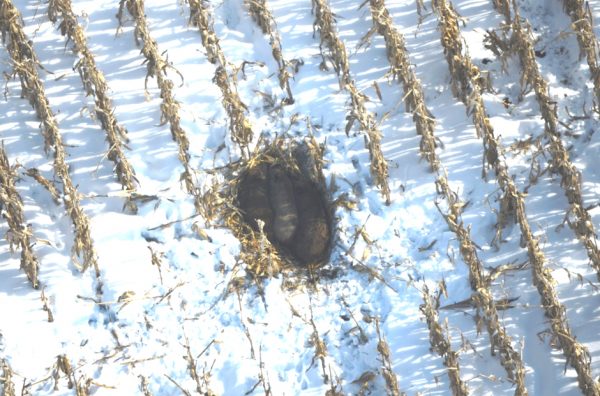 Seven or eight years ago, the problem was worse, Etter said. Pigs were seen in larger groups—of 15 to 20—a sign of a growing population. Larger groups are more damaging but easier to find.

Because swine are social animals, they seek each other out. Researchers can radio collar a pig, release this “Judas pig,” and follow it as it seeks out a group of pigs to join. When the pig locates a group, the entire group can be removed. It’s a strategy that works remarkably well.

“I did not think we’d get a handle on it as quickly as we did,” Etter said. “I’m not going to say we got all of them, but we’re in a great position relative to where we were 7 or 8 years ago.”

This strategy becomes less effective as groups of pigs become fewer and farther between. Environmental DNA monitoring could pin down a pig’s location at a watershed level and researchers could focus control efforts in those places.

Other places with feral swine problems haven’t had the same luck Michigan has or the advantage of catching the problem early.

In recent years, 5 million feral pigs have spread to 39 states and cost 1.5 billion dollars in damages and control measures, the USDA reports.

Pigs naturally root in the ground for their food and can tear up fields or pastures as they search for roots, grubs, invertebrates or eggs, the USDA Animal Plant and Health Inspection Service reports on its website. They can also eat crops, consume or destroy the eggs of ground-nesting birds and transmit diseases to livestock.

In Texas, where 3 million feral swine live, eDNA isn’t likely to be as useful, Bodenchuk said. 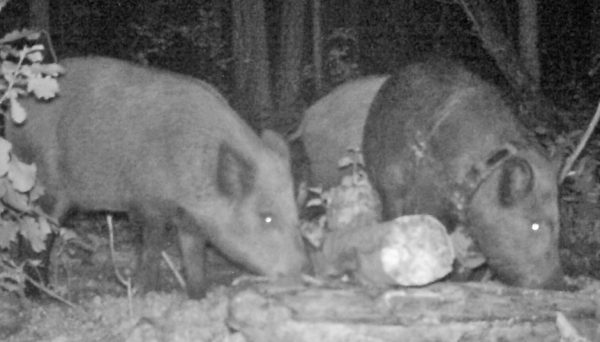 However, Bodenchuk agrees that environmental DNA will be very useful in locating pigs when populations get low enough.

It’s especially useful in warm climates where pigs (because they don’t sweat) have to return to water or mud regularly to cool off. Water samples without pig DNA over an extended period of time can give researchers a fairly reliable indication that pigs aren’t in the watershed.

Although states have eradicated pigs since eradication efforts started, Bodenchuk said, Texas can only hope to limit the damage at this time. Until pig populations in the state get low enough, environmental DNA isn’t as useful.

“I’m not hanging my management decisions on the presence or absence of eDNA,” he said.

But in states like Michigan, that have, for the time being, got their feral swine populations under control, eDNA could be just what researchers and officials like Dwayne Etter need.

“It could be a game-changer in those environments,” Etter said.