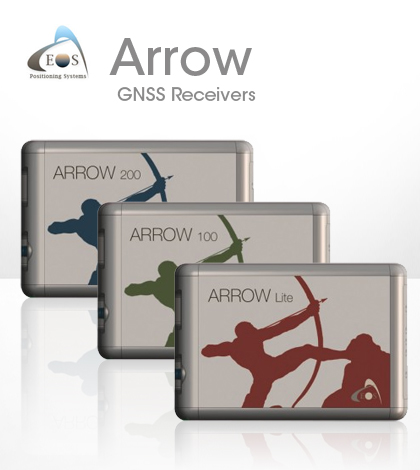 For pros working in mapping, surveying and other GIS fields, quick, precise data are a must. And the key to getting those data is getting the right receiver.

As a result, many turn to high-accuracy, multi-constellation receivers like the Arrow series built by Eos Positioning Systems. The series includes the Eos Arrow Lite GPS Receiver, Eos Arrow 100 GNSS Receiver and Eos Arrow 200 L1/L2 GNSS Receiver. The receivers are popular for many reasons: They have the flexibility to use multiple satellite constellations, offer real-time data transmission capability and can connect to any device via Bluetooth.

The Arrow receivers use the United States’ GPS constellation of satellites, but they can just as easily link up with Russia’s GLONASS, China’s Beidou and Europe’s Galileo. Regional constellations supported by India and Japan can also be used, and support for new positioning systems coming online is added routinely. The Eos Arrow receivers can also use ground-based positioning stations to pinpoint locations.

The connectivity with different networks helps to make sure that Arrow receivers maintain their accuracy no matter where they’re used. And as many GIS pros know, high accuracy is needed in all sorts of projects, from construction work to wetland mapping and mining site preparation.

“Take, for example, pole mapping in a concentrated grid with 5 to 10 meters accuracy using post-processing,” said Jean-Yves Lauture, chief technical officer at Eos Positioning Systems. “The GIS guy could put the pole on the other side of the road” as a result of the low-accuracy readings. Unlike the receiver used in the example, Eos Arrow receivers transmit data in real time, with no post-processing needed. Users can connect with iPads or any other Bluetooth device. The receivers are designed to work with any operating system, including iOS, Windows Mobile or Android.

“Having the real-time capability, it integrates into the workflow easily,” said Lauture. “Using an iPad in the field, it populates the server directly. There’s no more interpretation to be done.”

With all the different software suites available on the market, Lauture says Eos developers didn’t want to put out yet another. Through Bluetooth, users can use the device however works best for them.

“The customer can make his own recipe and shape his setup to whatever he wants,” said Lauture.

With all the features that the Eos Arrow line offers for getting data quickly and reliably, it follows that its maintenance needs have been streamlined as well. Lauture says that the battery pack, which lasts over 500 cycles, is essentially the only thing that needs to be replaced. For firmware and other updates, there is also an app called Eos Tools that users can download to keep their Arrow receivers up to date.

For Lauture, the best features of the receivers include the real-time data capability, as well as the ability to calculate up to 30-centimeter accuracy using WAAS signals. There are a few other things he’s proud of too.