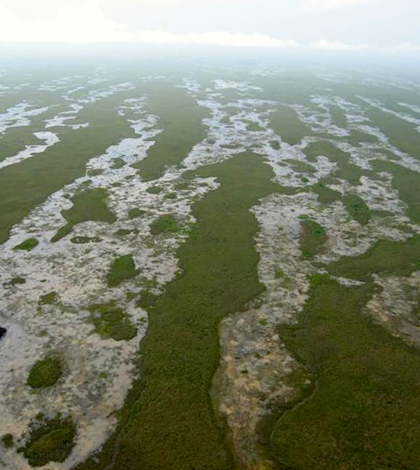 The Florida Everglades is often portrayed as a sprawling sawgrass marsh fraught with predators such as alligators, snakes and seasonal airboat pilots. In reality, the Everglades is a huge region of interconnected yet distinct ecosystems, ranging from familiar wetlands to truly primeval thickets of tropical hardwood.

Decades of terraforming, originally intended to drain and farm southern Florida’s wetland soil, have intersected much of the Everglades with canals and levees, breaking up the deep sloughs that naturally connected the system. Now, during periods of rain or flooding, valuable freshwater is shunted through canals into saltwater estuaries rather than flowing through the Everglades.

And that flow is the essential pulse of Everglades.

“Besides being very striking to the eye, we’ve come to understand that a system of sloughs interspersed between the ridges plays a critical role in the function in the Everglades ecosystem,” said Jud Harvey, a research hydrologist with the U.S. Geological Survey. “It creates connectivity for organisms to disperse and thrive, and that drives a diverse and productive food web.”

Harvey is the lead USGS scientist in a multi-agency experiment looking for the best way to reconnect the Everglades, and what the precise value of such an effort might be. The DECOMP Physical Model breached a levee and backfilled a canal to increase flow and spread it evenly across a roughly two-square-mile area just upstream of Everglades National Park, gradually restoring water flow to historical levels, or about ten times the current flow level. The DPM experiment is running from November through January, and will repeat over the same period next year.

“Our challenge is to lock down and predict the ecological outcomes so that managers can assess values — that is, the costs and benefits of restoration, and I’d say that’s the part that’s been missing,” Harvey said.

The hope, Harvey said, is that as the DPM restores streamflow through the experimental area, sloughs will reform without additional interference. The formation of sloughs requires a convergence of erosion in low areas and sediment deposition in high areas, and corresponding vegetation changes, processes that Harvey said will take at least three years of continued experimentation to complete. Researchers are taking regular measurements to monitor those processes, as well as conducting secondary experiments. USGS and SFWMD scientists measuring water velocity and suspended sediment concentration downstream of flow release on a raised platform that spans from a deepwater slough (foreground) into a sawgrass ridge. (Credit: USGS)

“Based on what we learned on this flow release, we will make adjustments to pose additional questions or nail down questions we didn’t answer last time,” Harvey said. And though it will take months for its effects on nutrient loads and fish productivity to become apparent, certain hydrological benefits, such as improved flow velocity, are already visible.

It’s not hard to draw comparisons between the DPM and the recent water release in the Colorado River with a similar goal: develop a water flow benchmark necessary to create a self-sustaining ecosystem. Like the Colorado River project, in which a pulse of water was released from the Morelos Dam in Mexico to replenish the drying river, Harvey stressed that the “DPM is not restoration — it’s a science experiment to inform restoration. If it works it will be a blueprint for managers.” Furthermore, both projects have passed through a gauntlet of legal and political obstacles before coming to fruition.

“A major challenge is the Everglades’ political landscape,” Harvey said. “They’ve done an excellent job serving human needs for water supply and flood protection, but a restoration that serves the environment and humans remains a challenge. Our experiment, I think, will lock in some of the thresholds that serve both.”

Once water flow thresholds that protect and restore sloughs are established, and the costs and benefits are made clear to potential supporters, Harvey hopes that managers will learn from the lessons of previous restoration efforts: less is more.

“A healthier Everglades means humans have to give up some of their engineering controls, these canals and levees,” Harvey said. “We know the ecosystem is healthier when it’s self-managed and self-maintaining, but as humans it’s hard for us to give up control.”

“This experiment is critical for making progress, but it’s not the end point,” he said.