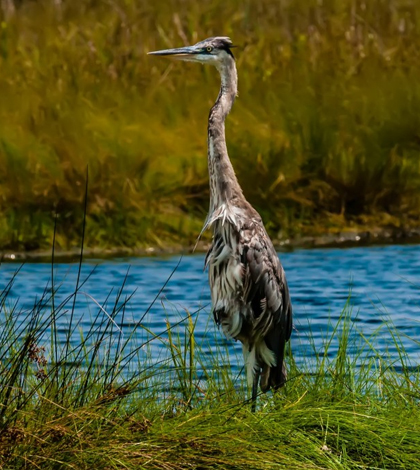 The Everglades is a special ecosystem, comprising the largest subtropical wetland system in North America. But beyond its size, it is also home to an astounding array of plant and animal life, including the American Alligator, American Crocodile and 73 threatened or endangered species, according to the Everglades Foundation. What does the future hold for the crucial region as an ambitious Everglades restoration plan gets underway?

It’s hard to say, but investigators at the University of Alabama are at work trying to learn more about the Everglades and its changes over time. The scientists have already been studying for nearly a decade gathering data at two sites in the wetlands, but have recently received a grant from the National Science Foundation to deploy two more. By expanding their data collection, the researchers are hopeful that they can continue gathering information key to predicting changes the Everglades may see in the future.

One of the older sites is set up in the park’s Taylor Slough, while the other sits nearby in the Shark River area. They were installed in 2008. The two new sites, still to be deployed in the fall, are planned to launch so as to form a transect across the Everglades. They’ll hit four key areas: coastal mangroves, freshwater marshes that have standing water six months of the year, freshwater marshes with standing water the whole year and the brackish ecotone. That is an area where freshwater mixes with saltwater and grassy marsh gives way to mangrove forests.

“We’re looking at how changes in the hydrology, associated with hurricane management, affects species composition,” said Greg Starr, associate professor of biological sciences at the university. “Or how these ecosystems are respiring. Are they sequestering or are they a sink to the atmosphere?”

To get at those and other questions, the researchers are relying on an array of sensors. Some of these — infrared gas analyzers and anemometers — capture eddy covariance, essentially the movement of gases and their fluctuations. These sample every 10 seconds.

“We look at the balance, the whole system respiration, including the methane reduction and release,” said Starr. “By doing that, we can determine the changes, what’s giving off greenhouse gases and understand the drivers.”

But there are also meteorological sensors to gauge weather, light sensors to record radiation from the sun and soil sensors that keep tabs on the movement of moisture through the surrounding wetland. The grant his team just received will keep the project moving for another three years, but Starr would like to continue gathering data with the systems for as long as possible. More understanding is needed, he says, in light of ongoing changes in the region. These include high use of the area’s aquifer and sea level rise that is spurring the intrusion of saltwater as well as the Everglades restoration plan that has just begun implementation.

“We’re just getting long-term datasets, unique datasets, and we hope to continue for as long as funding will allow,” said Starr. “There’s a substantial restoration effort going on — a multibillion-dollar effort.”

Over the coming years, plans are to reintroduce freshwater inputs once diverted from the Everglades to bring back some of the historical flows that pulsed through it. Work has already begun on the Tamiami River just last year, Starr says, where a trail has been removed and a major roadway has been raised to make room for water passage.

“We’re at the forefront of those changes. Within four to five years, following the hydrological changes, you can have substantial impacts for plant communities, major impacts to carbon cycling in the system,” said Starr.

Studying the Everglades’ gas emissions is also important in a future of predicted climate change. But researchers all around the world depend on the data as well. Starr says that information from the existing sites is downloaded, on average, 200 times per year by other scientists. They typically plug the data into models and simulations that are used to study global dynamics and land-surface change. Measurements are also shared with the Ameriflux Network, which connects research on field sites representing major climate and ecological biomes.

Starr’s colleague, Christina Staudhammer, associate professor of biological sciences at the university, plans to do something similar with the data. She is serving as statistician on the project to make simulations that can understand the drivers of Everglades’ greenhouse gas emissions. Those include how the water table changes, dissolved oxygen levels and the activity of phytoplankton and algae that can sequester carbon.

But given the length of the dataset, investigators have already gleaned a few insights. The Everglades seems to take in less carbon dioxide than previously thought. Starr says that this is due to the decline of a layer of peat that once took in much more of the gas. A preliminary find is that the researchers are also seeing some methane release along with that sequestration, hinting to a possibility that the Everglades could be contributing to atmospheric warming.

The impacts of external weather events, likewise, have been documented at a few of the sites. Following a freeze, photosynthesis and carbon sequestration went down, but some plants at inland sites were buffered because they were flooded with relatively warmer water. The most damaged vegetation, Starr says, was that more exposed.

“But we’re not the only ones out there (researching the Everglades). We’re just one cog in a large wheel of scientists working to develop a better understanding of this national treasure,” said Starr. “We want people to understand what happens there and to get the proper knowledge. The goal is to aid and develop understanding to retain the Everglades in as pristine a state as possible. And that’s a continuing process.”