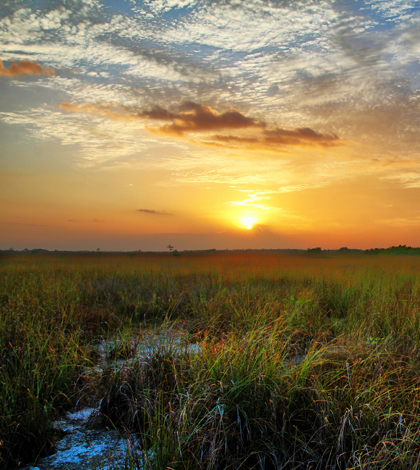 The latest in a series of progress reports on a multibillion-dollar, long-term plan to restore the flagging Everglades ecosystem cites modest gains amidst bureaucratic and budgetary obstacles.

The report also recommends a budget-proof, continuous monitoring program to capture changes in the system, whether they’re brought on by restoration projects or other influences like climate change.

“We feel like it’s time to take a look to see if they’re measuring all the right things and measuring them at the right frequency,” said Jeffrey Walters, chair of the Committee on the Independent Scientific Review of Everglades Restoration Progress, the body responsible for the biennial reports.

The committee recommended reevaluating the monitoring program in their fifth report on the Comprehensive Everglades Restoration Plan, or CERP. That’s a collaborative initiative between the federal government and the State of Florida to restore some of the Everglades’ natural hydrology, habitats and species over the course of three or four decades.

After a century of engineering altered the South Florida landscape through canals, levees and pumps, the Everglades now covers half the area it once did. This human-made system redirected the natural flow of water to control floods, irrigate agricultural land and provide water to growing urban populations.

But the loss of natural flows, combined with pollution and the outright draining of areas for agricultural use, have decimated the Everglades. Dozens of its species have been listed as threatened or endangered while habitats unique to the system — custard-apple forests, for example — have disappeared.

In an effort to rejuvenate the ecosystem while still controlling floods and meeting the water needs of farmers and coastal residents, Congress approved the CERP in 2000. That approval required an independent report on the plan’s progress every two years, the most recent of which was released in June by the National Research Council. Nesting for the roseate spoonbill — in iconic Everglades species — has recently improved, according to the report (Credit: Kimon Berlin, via Flickr)

Each of the five progress reports has included a section on monitoring and assessment, and this year is particularly focused on the importance of stable funding. An interagency group called RECOVER — short for Restoration, Coordination, and Verification — that oversees monitoring and assessment for the restoration plan has seen cuts in recent years, including a 50 percent decline from 2007 to 2012. Those cuts were made quickly, Walters said, and “there is some concern whether what they’re left with is what they need to have.”

And what they need to have increasingly involves a monitoring program that can capture climate change effects such as sea-level rise.

Another funding obstacle is a cost-sharing requirement that obliges the state and federal governments to split the price of CERP projects 50-50, according to Mary Jane Angelo, research foundation professor and director of the Environmental and Land Use Law Program at the University of Florida in Gainesville.

“It exacerbates problems that could occur where either the state or the federal government has budget shortfalls and then the other entity isn’t really able to necessarily step in temporarily to fill the gaps,” said Angelo, a member of the review committee. When shortfalls hit a restoration construction project, that tends to mean that work slows down until funding picks back up, Walters said. Monitoring, on the other hand, tends to stop completely. That leaves troublesome blank spots in long-term records that are important for evaluating change in the ecosystem. When funding picks back up, managers have to decide whether it’s worth it to bring a monitoring project back with a gap in the data.

Monitoring data are especially important given the timescale of the Everglades restoration plan, with some projects playing out over decades. Ten years after a restoration project begins, managers will need a solid scientific record to look back on to make sure that the plan’s objectives still track with changes on the ground.

“The state and federal government are both investing a lot of resources into this restoration,” Angelo said. “To ensure that the money is being spent efficiently and effectively you need to have data to show what’s actually happening out there.”