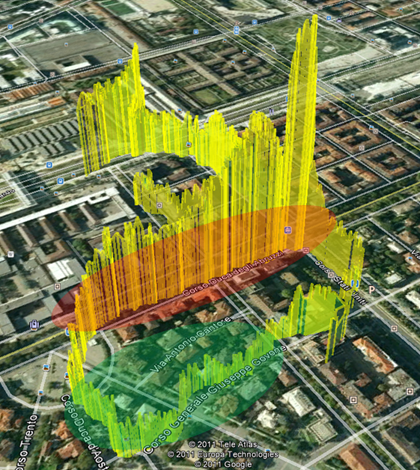 Although the average adult breathes over 3,000 gallons of air each day, it’s hard for the layperson to know just how many foreign compounds and pollutants enter their lungs alongside all of that oxygen. The outcomes of a European Union monitoring project called EveryAware could help people become more familiar with the air they breathe on a daily basis.

As part of an international challenge, more than 300 people from cities in Germany, Belgium, England and Italy carried out their lives equipped with small sensor boxes and AirProbe, an app that monitors exposure to air pollution and includes social games to promote data sharing between participants. Another app, WideNoise, measured noise pollution using standard smartphone microphones.

“The basic idea was to have a baseline of data and then to see whether the availability of this data could change the perspective people have about their environment,” said Vittorio Loreto, EveryAware project coordinator for ISI Foundation in Turin and physics professor at Sapienza University of Rome. He worked with other researchers from other European organizations to get EveryAware off the ground.

Many city dwellers are aware of pollution present in urban air, Loreto said, but mostly in the context of government-issued smog alerts. The sensors that measure pollution levels for the public are expensive, leading most cities to monitor air quality at a few key locations. This creates a problem: People who live and work away from the sensors may never know how clean or polluted their air actually is. For some, Loreto said, the lack of individually relevant information can foster apathy or distrust of environmental monitoring efforts.

“The top-down approach is not really working,” Loreto said. “If what you impose is not shared by the population, people will typically not pick up on it.”

So the researchers tackled the issue from the ground up. They distributed sensor boxes among volunteers — many of whom were students — in four cities: Antwerp, Kassel, Turin and London. A screenshot from the AirProbe social game.

By equipping citizens with relatively inexpensive personal air quality sensors, the researchers give individuals the ability to better understand and reflect upon their immediate environment. With the AirProbe app, users can view objective readings of air quality and share personal impressions with other readers. It’s this aspect of the project that has Loreto especially excited.

The combination of social app and sensor facilitate “the possibility of the individual to connect objective measurements with subjective data — perceptions, feelings, emotions,” Loreto said. “It’s within this gap where the interesting science is, actually.”

Between 2011 and 2013, sensor users collected over 28 million air quality data points, according to an EU press release. And it seems that they want to continue doing just that, Loreto said. The researchers “received hundreds of messages from people who wanted to buy the sensor box,” he said. With demand high, the researchers are looking for a way to bring the price of the device down from $515 to $130, as well as a company to produce the device on a larger scale.

The relatively limited scope of the initial project has still managed to make an impact. Noise pollution data collected with the WideNoise app have been considered in the proposed expansion of Heathrow Airport. And the proprietary social gaming platform designed by EveryAware is inspiring other researchers in many fields.

“This is a way in which you can actually engage people, extract information from people and make people interact,” Loreto said. “It’s a very valuable tool that, in the future, will see more use in every experimental setup.”