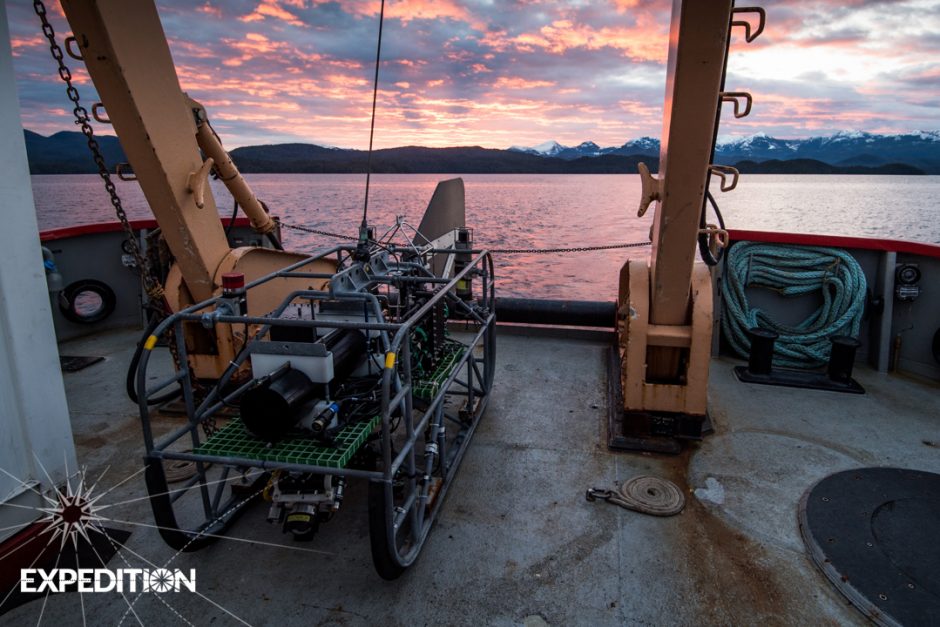 The underwater camera apparatus in daylight on the ship’s deck. (Credit: Oceana Canada/Evermaden)

This March, six Canadian partner organizations teamed up for a science mission off the central Canadian coast. The expedition was an ambitious effort to explore the Seaforth Channel, Kynoch Inlet fjords, and Fitz Hugh Sound—areas which have particular significance for the Kitasoo/Xai’Xais and Heiltsuk First Nations. The team focused on deep water sites below 200 meters where little to no scientific exploration has taken place before.

Tammy Norgard, Fisheries and Oceans Canada’s chief scientist, spoke with EM about the expedition from the boat on the eve of its final diving day.

“Right now we’re on a science mission off the coast of British Columbia, and we’re using our deep sea camera technology to study the deep habitats of the coastal waters of British Columbia,” explains Norgard. “There are a lot of deep areas that haven’t been able to be surveyed because most ROVs and tech that communities in the local area have only go to 200 meters. We brought a camera that goes to 2 kilometers, or 2,000 meters undersea. We found habitats in this particular survey up to about 500 meters; I think 550 meters was our deepest dive this week.”

The project was unique in more ways that one. The team was exploring deep regions of the ocean that had previously remained unknown, but the structure of the expedition itself was also groundbreaking.

“The project is a collaboration between six partners, which is a really interesting part of the story,” details Norgard. “I represent the Department of Fisheries and Oceans, and we have partnered with two NGOs: Ocean Networks Canada, and Oceana Canada. Three first nations groups are also participating: two first nations communities, the Heiltsuk First Nation and the Kitasoo/Xai’Xais First Nation, as well as the Central Coast Indigenous Resource Alliance. All six of us came together, talked about some research objectives that we could work toward, realized that we had a really good project, and put together this field expedition.”

As the expedition was winding down, Norgard described how productive the voyage had been. “I would like to keep exploring the deep waters up here,” Norgard remarks, considering the last dive the next morning. “What we have found makes me really want to go look for more. We used modeling to suggest where we might find rocky habitats in the deep waters, and then we went out and tested it and saw all different kinds of these habitats. We really refined what we know about the deep ecosystem here, and we found amazing coral gardens, it’s been fantastic.”

Although most people think of shallow, sunny waters as the right setting for coral reefs and similar kinds of habitats, more than half of all coral species are found in deeper, darker waters. Expeditions such as this one with its strong educational outreach component help expand not only the knowledge base of ocean scientists, but also laypeople.

“The other big angle on this survey that was really important to me and to a lot of the partners, was to make sure we shared what we were seeing in real time with as many people as we could,” states Norgard. “So that was the purpose of the live streaming component of the survey, and a large logistical component of getting a satellite dome on the back of what is not one of our largest Coast Guard ships.”

As the team captured images from deep below the surface, members of the science team explained some of what was being seen—as did Alexandra Cousteau, Oceana Senior Advisor, filmmaker, and granddaughter of Jacques-Yves Cousteau.

“We found corals, sponges, and large rockfish in these deep habitats. One of my programs works on vulnerable marine ecosystems, so we were looking for corals and sponges, because they are vulnerable,” explains Norgard. “We went looking, and we found them in abundance in these central coastal waters. They were in good shape. They take hundreds of years to grow to the sizes we saw them.”

The novelty of the sea life surveyed was notable, even among the experienced science team taking part in the expedition.

“Even I haven’t seen very many of these!” adds Norgard. “We don’t do that many surveys for these depths. Everybody on board was pretty excited.” The front of The Vector on the water. (Credit: Ocean Networks Canada)

The right tools for the job

The technology for these kinds of surveys is complicated and expensive. The Department of Fisheries and Oceans developed the drop camera the team used on the mission specifically for this expedition. James Pegg, the mission’s visual survey coordinator from Fisheries and Oceans Canada’s Pacific Biological Station, also spoke with EM from the Vector.

“The camera is entirely custom-built,” explains Pegg. “It’s a budget way of going deep when you can’t afford one of the big fancy science ROVs. So basically, it’s just a camera on a string.”

Of course, the rig is far more advanced than that description makes it sound; the main camera is a high definition video camera, and it’s joined by other cameras and various instruments that the team adds on and takes off for testing purposes.

“The cable has a few copper conductors for power, and then two fiber optic strands,” details Pegg. “There’s a telemetry can with a video ethernet server in the vehicle. The HD video is on its own channel, and most of the other data is actually being sent up through ethernet, so there are serial ethernet servers down there.”

Getting used to moving the camera can take a little bit of effort.

“The main video is on a pan and tilt, and we can control that through a serial channel to the ethernet the serial adapter,” Pegg describes. “So we can’t move the vehicle itself, but we can turn the camera 180 degrees horizontally, and then up and down about 90 degrees. So even if we can’t point the vehicle in the direction we want, we can point the camera.”

The rig also uses multiple sensors. It has two altimeters, one facing straight down, and one mounted on the camera itself, so the team knows how far from the bottom the camera is looking at any given time. The camera’s sensors can also help the team process how much ground was covered. Aside from those sensors that help orient the camera in the water, it also carries sensors to measure salinity, temperature, dissolved oxygen, and other values the team needs to know. The camera is lowered into the water from the boat. (Credit: Fisheries and Oceans Canada)

“We’re tracking the vehicle in real-time as well; it has an acoustic, ultra-short baseline tracking system,” remarks Pegg. “So we know where the vehicle is all the time. It weighs [about 500] kilograms; you’d think it’d be hanging right under the vessel all the time, but it’s not. Depending on currents and the way the vessel is moving it can be a couple hundred meters away from the vessel.”

One of the most important pieces of equipment on the camera is its light source; in fact, because this camera is working in such deep water, it uses multiple sources of light.

“If you see a picture, the camera’s in the front,” Pegg describes. “On the other side away from the fin, there are lasers mounted on the camera so we have a scale reference for everything we’re seeing. There are lights all over the place. That’s the biggest usage of power: the lights. We’ve maxed out our power budget with as much light as possible on the vehicle. You have to bring all your light with you.”

Although the actual livestreaming component of the expedition ended when the team disembarked, you can still watch videos created for the mission here.