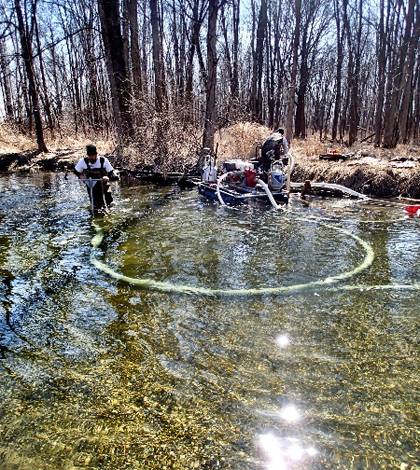 In 1998, a rapid drawdown of a dam in Northeast Indiana sent 100,000 cubic yards of sediment oozing over a five-mile stretch of the Fawn River’s pristine gravel stream bed.

The release turned what was one of Indiana’s few deep, swift, cobble-bottomed streams into a slow, wide, mud-clogged channel with eroding banks. Now, 15 years later, a set of restoration techniques has some segments of the muddied stream looking as clean as ever.

“None of us really knew how successful we were going to be when we started, and we’re pretty pleased with where we are at this point,” said Neal Lewis, a trustee with the Fawn River Restoration and Conservation Trust, a non-profit group working to return the stream to pre-1998 conditions. “There are going to be people swimming in and enjoying the river this year for the first time in a very long time.”

Much of the restoration progress has come from a novel stream restoration technology developed by Ohio-based company Streamside Environmental. The company’s patented Sand Wand tool removes the find sand and silt from the stream bed while leaving the gravel behind. The equipment, which looks something like a large vacuum, pumps the unwanted sediment up out of the stream channel and into large pits dug into upland areas.

The sediment that filled the stream after the dam release pushed water levels up over the banks, widening the channel beyond its original width of around 25 feet. Rather than vacuuming up the bottom of the stream’s entire width, the Stream Wand crews are cleaning a 20- to 25-foot swath down the center of the stream in an attempt to restore its original channel. The Sand Wand is manually operated and selectively removes the silt and fine sand material while leaving the native cobble and gravel in place (Credit: Fawn River Restoration and Conservation Charitable Trust)

Stakes driven into the stream bed guide crews to which areas get the Stream Wand treatment. Lewis does much of the staking himself. He said he can see where the river is making a feeble attempt to slowly scour away the sediment and cut down to its natural channel, but doesn’t quite have the power to do so.

For the areas of the Fawn where pumping out sediment isn’t feasible, the Trust is working with Michigan-baed Kanouse Outdoor Restoration to install trees and other large wood structures in the channel. These help narrow the stream and focus the flows, giving the stream the velocity it needs to sweep away sediment on its own.

Between the wood structures and the Stream Wand, Lewis said he expects two miles of the Fawn will be restored by the end of 2013.

“It really does take both of those technologies working together to have the kind of high-level restoration success that we’re having,” he said. The Trust’s other work on the Fawn includes monitoring water levels with Solinst Leveloggers at reservoirs upstream and downstream of the section being restored. That helps give them an idea if any more unusual releases are occurring. As water levels drop, the group is also working to plant native sedges on the exposed sediment where the stream has cut new banks.

“The work is really fun, especially when you see it coming together,” Lewis said. “It’s a beautiful river with the gravel bottom restored. It was pretty ugly when it was filled with mud.”