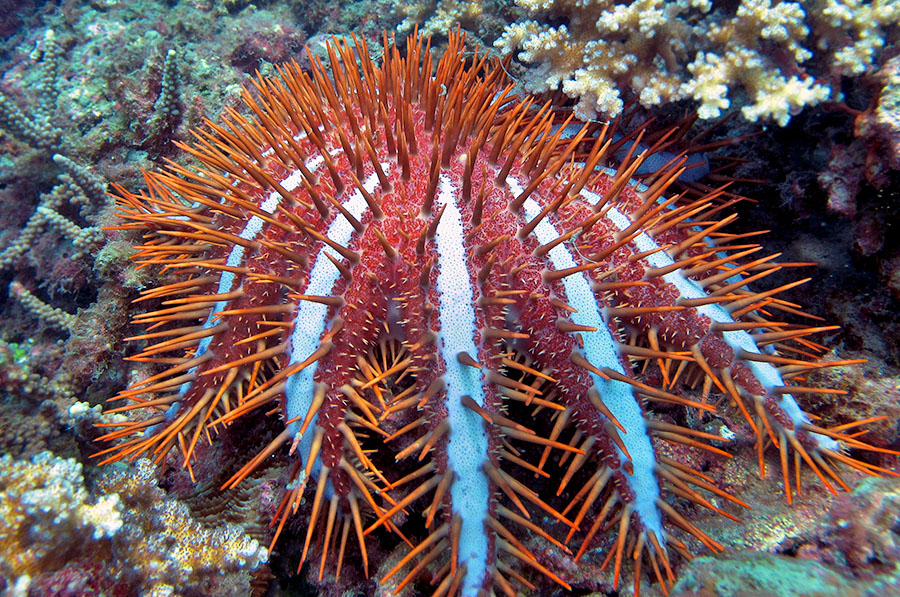 Since the mid-1960s, Australian officials have noticed an “outbreak” in populations of the crown-of-thorns sea stars (COTS). More and more COTS were living on the Great Barrier Reef (GBR) for unknown reasons—and this was a problem because these sea stars feed on live coral.

Principal Research Scientist Dr. Sven Uthicke from the Australian Institute of Marine Science (AIMS) spoke to EM about the invasive COTS and the work the AIMS team is doing to cope with the problem. Initially, the researchers were simply trying to identify what was causing the outbreaks.

“We developed these probes initially to identify larvae in the plankton, which might sound really trivial to you, but it is really hard to do,” explains Dr. Uthicke. “With microscopy, you can’t tell these larvae from many other kinds of larvae. Most people said: ‘Look you guys will never find any larvae,’ but we did actually find it. Maybe we got lucky on our first field trip in 2014. We confirmed the method, found the larvae, and since then have actually implemented regular monitoring in the plankton community.”

The team came across the idea of using eDNA as they grappled with the problem of detecting COTS in the early stages of an outbreak.

“In the early outbreak stages, the young juveniles and even the adults are really quite hard to detect,” details Dr. Uthicke. “With standard monitoring, you have to put in a lot of effort; we have people in the water 100 days a year, basically, serving only 60 reefs, which is just a percent of the total reef system. We thought we’d use the same genetic probes and see whether eDNA actually works for other life stages. In other words, could we capture free DNA which was not in larvae but which indicates that the adults were there on those reefs?”

Free eDNA doesn’t hang around in the water, especially water with currents. If a team picks up eDNA, that typically means the species in question is there in some numbers close by.

“The whole idea sounded a bit out there, because the eDNA approach has been used in freshwater environments, and you can easily imagine how that works; if you’re looking for introduced species like the carp, for example, in a pond, yes, it will shed DNA and it’ll hang around,” Dr. Uthicke describes. “But if you look at the ocean, which is obviously much bigger, and has stronger currents, so I myself had no idea whether this would work or not. And I was quite surprised that it worked.”

Searching for shed DNA in the ocean might seem like a fruitless pursuit, but in context it makes sense. In the current paper, Dr. Uthicke and the AIMS researchers are using the same genetic probe they used for their larvae work, a primer which is specific for a mitochondrial gene region in the COTS, which is also a general region used for barcoding of species in general: cytochrome oxidase 1.

“In order to be a bit more sensitive, we shifted from the quantitative PCR method to a slightly newer method called digital PCR,” reveals Dr. Uthicke. “We put, as you would imagine, crown-of-thorns-like sea stars in various numbers in aquaria which have a lot of flow-through, captured their water, and measured whether you can actually detect the eDNA in each case. That worked really easily; we got the DNA of those, but then the test was whether or not we’d find the DNA and stars in the field.”

The team conducted trips into the field to collect water along the reefs, simultaneously doing diving transects to count COTS densities.

“In the paper, we show that we can definitely detect them out there,” concludes Dr. Uthicke. “We’re not 100% sure what the lower threshold is going to be. We don’t know if it’s one individual sea star per hundred square meters or what, but we know there’s a rough correlation between the densities and the DNA, and we know we cannot detect them if there are none there, which we’ve shown in the northern areas.” 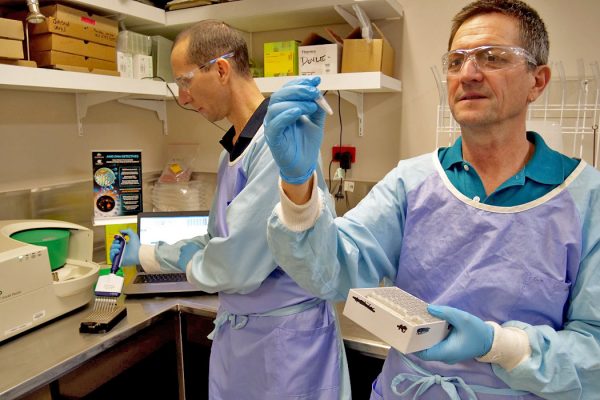 While the method uses basically the same kind of PCR technology used in other contexts, it’s not exactly the same as the techniques employed, for example, in crime labs.

“It’s a bit of a hybrid between standard techniques and next-generation sequencing, because there is not only a chemical step, which is the amplification of the DNA with specific primers, but also a mechanical or a physical step where you’re actually physically separating your sample into hundreds and thousands of little droplets,” clarifies Dr. Uthicke. “The ‘D’ can stand for digital or droplet, or you can say DD, like digital droplet PCR. Your sample is split into nanodrops, basically, and the PCR reaction is still a normal reaction but it happens within each of these individual nanodrops.”

Thus, the results are statistical: “If you have 20,000 nanodrops and 5,000 of those have a positive reaction, you can say a quarter of that sample had positive reactions and you can work out your copy numbers, based on that,” adds Dr. Uthicke. “It’s quite neat. And it works nicely.”

Protecting the Great Barrier Reef into the future

Now that the AIMS team has proven that their method works, it is part of their protocol.

“We had the trial a couple of years ago and sent the samples away,” remarks Dr. Uthicke. “It worked so nicely that we convinced our bosses to buy one of those machines too, so we can run those samples here now because obviously, it’s not just used for crown-of-thorns sea stars, but also for other organisms.”

Protecting a huge reef system like the GBR from various invasive species is a big problem, and although new techniques and technologies like this can hopefully make the job easier, there are no silver bullets.

“The people from our institute spend over 100 days a year in the field, counting the COTS, and it’s only a small reef,” states Dr. Uthicke. “The problem is: they’re doing a fantastic job, but we’re still missing these early stages, so people still quibble about an area of 300 kilometers, which is huge, whether they start breaking out more in the area of Cairns or further north.”

This might sound trivial, but there are two reasons why it is critical for the team to know where the COTS start to break out.

”Firstly, if we discover early on where they break out, we can start putting boats in the water and try to get rid of them,” emphasizes Dr. Uthicke. “Secondly, it’s important for us to understand why they break out by knowing where they start to break out, which is quite important to us. I suspect eDNA will always be an early warning method, and once we’ve found them with the genetics, we will still send people in the water to have a look and do a more detailed, focused count on the few reefs where we’re detecting them.”

This is not to say that the team has completely changed their methods; when it comes to tracking and managing the COTS, more options that work well together are better.

“We are still doing a mix between field research and lab research, which I think is the strength of what we’re doing here because we still dive and go in the water and count those starfish; like you would have done it 15 years ago,” affirms Dr. Uthicke. “Back then we’d take water samples and also analyze them back home in the lab.”

In other words, coupling the eDNA technique with tried and true field methods will enable smarter deployments, and better coverage with the same amount of human-power, despite the quick life cycle of the COTS.

“Practically from settlement of the larvae to the adults being big enough to spawn again and form the next generation it is three or four years,” confirms Dr. Uthicke. “So yes, we have a window, but if we don’t find them in those two years on some reefs, then we’ve probably lost already because then we’ve got so many that it’s really hard to chase them all down.”

Part of the trick is “seeing” these larvae, well enough to manage them.

“The larvae are eaten by quite a few fish species, like small butterfly fish and others, that’s known,” confirms Dr. Uthicke. “And we also know that the adults are eaten by a few different organisms; some fish eat them, which is why I say we’re not 100% sure what’s causing these outbreaks.”

In fact, there are two competing hypotheses about the outbreaks.

“It may be that predators have been removed, overfished, basically,” comments Dr. Uthicke. “They may have been fish but one other suspect is also the very big triton snail, which was fished out around 100 years ago, and we don’t know how many there ever were. That’s the predation hypothesis. We’re also looking at whether increased land runoff provides more nourishment for the larvae. And as is so often the case in science, the truth might be that both of these factors are important.”

Since there is no way to retroactively undo overfishing and no simple, immediate way to halt runoff, the simplest management answer may be to control the larvae.

“From a management perspective there’s a lot of hope,” asserts Dr. Uthicke. “Realistically if we could prove that it’s predation, you can actually do something against it, theoretically. At least you can introduce more zones protected from fishing and all sorts of things. If it’s water quality, it’s much more difficult to change, because the changes in land management which have been introduced since European settlement in the 1860s would be really hard to reverse. But for now, we’re just trying to find out what the real cause is.”

Dr. Uthicke and the AIMS researchers are also hoping to enlist the public’s help—a tradition around the GBR.

“What we would really like to is make the methods easier and more efficient so in the long term, we could make it so easy that we could even take something like a citizen science approach, where dive operators can either do that themselves on the reef or they would maybe just get samples and send them to us,” Dr. Uthicke says. “We work quite a lot with the community already, and we’re currently working towards just making these approaches more simple, basically.”

Locally the GBR is important to everyone’s livelihood and is directly connected to their ability to survive.

“The dive operators really suffer, because currently there’s so much bad press about the reef,” remarks Dr. Uthicke. “Part of that is true, but it’s not true that the reef is dead. You can still come to the Barrier Reef and do fantastic dives, but their current reputation, at least in Europe, is quite bad, so dive operators are really suffering from fewer tourists coming over, it’s a very direct effect on their livelihood, so they’re very keen to help. And they’re very strongly involved in supporting the science, but they’re also very strongly involved in removing starfish from the reef and at least keeping some of the key sites clean and divable.”