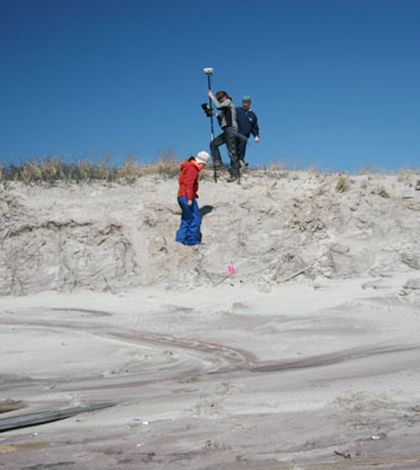 Fire Island isn’t as well-known as its iconic neighbor, Long Island. Nor is it nearly as inhabited — its year-round residency sits around 500, compared to the 7.6 million people that live on Long Island. However, the home of Brooklyn and Queens owes plenty to the tiny barrier island next door, which bore the brunt of Hurricane Sandy in October 2012.

“Fire Island was one of the most impacted areas in New York,” said Cheryl Hapke, a research coastal geologist with the USGS. “The island sustained enormous amounts of damage. About 50 percent of the dunes were completely razed or leveled.”

Separated from Long Island by Great South Bay, Fire Island once stretched more than 60 miles. Natural erosion and weather events cut the island down to the 30 mile length that it spans today, and its continued change has made it a point of interest to geological researchers like Hapke. Now the USGS is making data from the island’s ongoing study available to the public, so future changes can be readily predicted and prepared for.

“There was a need to make sure that our partners, shareholders and decision makers had access to…ongoing projects at the Fire Island National Seashore,” Hapke said. That need was exemplified in the aftermath of Hurricane Sandy.

“We’ve been working at Fire Island for a number of years,” Hapke said. “But we never had data from before a storm and right after. When we realized Sandy was as big as it was, we flew up there from Florida and [gathered data] while the island was being evacuated.”

Two days prior to the storm that would become the second-costliest in American history, Hapke and a team of USGS researchers collected elevation data using Ashtech Z-Xtreme GPS surveying instruments. As the team walked the beach, the instruments collected differential GPS data at 0.5-second intervals, measuring differences in elevation at sub-decimeter accuracies. A breach in Fire Island brought on by Hurricane Sandy (Credit: USGS)

When Hurricane Sandy subsided, Fire Island was left a drastically changed place. Most of the oceanfront homes on the island were damaged — a sharp blow to the island’s residents and the tens of thousands of people that summer there. Atlantic waves breached the island in three places, giving the ocean three new routes into Great South Bay. Much of the beach was left flattened from erosion and overwash.

Hapke and her team returned to Fire Island after the storm passed and gathered data using the same process as they had before the storm. Changes in elevation and coastal shape that could be seen with a glance were confirmed and quantified through GPS data. However, Hapke said that damage to the island was actually a saving grace — both to Long Island and Fire Island itself.

Because of Fire Island’s location, damage to nearby Long Island was restricted to that caused by flooding. The barrier island’s beaches and dunes absorbed the more destructive energy of incoming waves.

“Even though Sandy caused an extensive amount of damage, these types of coastal storms are expected,” Hapke said. “In order to maintain themselves over time, barrier islands require storms like Sandy.”

While violent storms flatten dunes and carry sand offshore, natural tidal rhythms push sand back up onto barrier islands. This system of sand exchange keeps the narrow islands from washing out to sea.

“We’re seeing evidence that the area is responding in a typical but healthy fashion… The beach is recovering beautifully,” Hapke said. “Without large storms, barrier islands would drown in place.”

Since the passing of Hurricane Sandy, the USGS have conducted bimonthly field studies to monitor the elevation and shape of Fire Island. The USGS is making that data, as well as decades of historical data, available through a public website.

“Our oldest dataset is using historical maps from the 1930s,” Hapke said. “We’ve supplemented that from sources like aerial photographs, and most recently LIDAR data.” A variety of data is accessible on the website, Hapke said. The website includes analyses of longer term coastal change, but they’re also continuously updating it with new field data.

By making the data easily accessible, Hapke explained, the USGS helps managers and decision makers track the recovery of afflicted areas. A coastal manager can see “which areas are rebuilding themselves, and thus more resilient to future storms.” Hapke also noted that the new website will not be the last of its kind.

“The website is a new type of product that the USGS is planning on putting out,” she said. “It’s really unique in that we’re developing an approach to make our research accessible to the general public.”