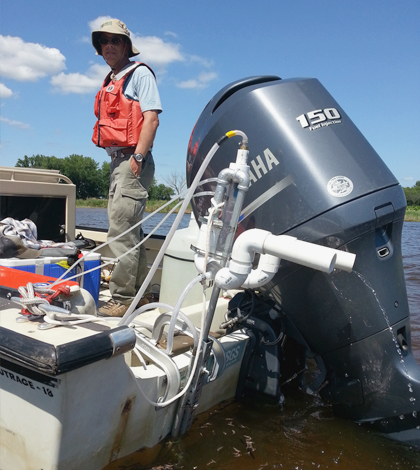 While limnologists are well-versed in tracking how a lake or river changes at a single point over time, a new homespun, high-speed sampling rig could soon help scientists capture a snapshot of how water quality varies across a water body’s entire surface.

The Fast Limnology Automated Measurement platform, or FLAMe, is a boat-mounted water intake system that analyzes surface water quality with advanced sensors while traveling “as fast as your boat can go, essentially,” said John Crawford, a USGS research ecologist.

Crawford started working on the FLAMe platform while a graduate student at the University of Wisconsin’s Center for Limnology, where he said his supervisors first scoffed at the concept before coming around.

“Going fast is not just because we were grad students having fun in the summer,” Crawford said. “It actually serves a pretty important purpose with some of these questions that we’re interested in.”

Those are questions of how a lake or stream’s surface water varies in chemistry or hydrology at a single moment in time. Speed matters here because the sensors need to cover as much water as possible before time becomes a factor. Daily photosynthesis cycles, for example, could significantly influence dissolved oxygen levels within a matter of hours.

By syncing the sensor data with timestamped location coordinates from an onboard GPS unit, Crawford and his collaborators have generated water quality maps for systems as small as a bog pond and as large as a Mississippi River pool. The intake is largely made up of a few hundred dollars’ worth of pumps, PVC pipes, hoses and clamps, but it draws water over the same advanced instruments that limnologists have used for years in more stationary applications. Crawford said the spatial angle is an understudied one in freshwater research, which tends to focus more on how water quality at one spot varies with depth or passing time. That’s especially the case when it comes to using recent sensor technology.

“What we’re arguing is you can leverage those to go after spatial patterns as well, with a really small investment,” Crawford said. “We made most of this with stuff you can pick up in the plumbing aisle of a hardware store.”

A full list of components, CAD drawings and other instructional material is freely available along with a study of a few FLAMe field applications that was recently published in the journal Environmental Science and Technology. Crawford — the lead author — and his collaborators are also working with a manufacturing group to get them into the hands of more researchers.

The FLAMe system includes a low-speed setting that uses a pump to draw water to the sensors, which are housed safely on the boat. Keeping the instruments onboard and bringing the water to them felt like a safer alternative to towing them outside the boat, which Crawford said others have tried in the past.

“That’s a frightening prospect in my mind, when you have such expensive equipment that you want to take care of,” he said.

That can also keep the instrument from doing its job well. The FLAMe flow-through system, for example, is engineered to virtually eliminate bubbles that can interfere with optical sensors. The high-speed setting uses a separate intake that relies on the velocity of the boat to force water into the system. The pump then pulls sub-samples of that water to the sensors, so the sampling rate is still controlled. The FLAMe developers have tested it with instruments including the YSI EXO2 multi-parameter sonde and Ultraportable Greenhouse Gas Analyzer from Los Gatos Research.

Crawford’s research interest in dissolved greenhouses gasses and how they vary across surface water is part of what led to the platform’s creation. The study of FLAMe applications reports dissolved carbon dioxide data from Allequash Creek in northern Wisconsin, a small stream where the high-speed setting wasn’t likely to get much use. They floated the creek in a johnboat Crawford said was barely big enough for the equipment and a person, who likely had to get out and push. Still, the variety in the data from trip was impressive.

“In one day sampling from the head to the outlet, we see as much variability in CO2 concentrations that we might see at one site over the course of a year,” Crawford said.

They also produced maps of nine different water quality parameters across the surface of Trout Bog, a small lake surrounded by a peat wetland. Though some of his colleagues doubted the lake would show much variability, they were surprised by distinct patterns in conductivity, temperature and dissolved oxygen.

Beyond those low-speed tests, the researchers also mapped the larger Lake Mendota and Pool 8 of the Mississippi River while traveling at speeds approaching 30 mph.

“This concept and this general setup is functional for the smallest of headwater streams the smallest of lakes, all the way up to large lakes and one of the biggest rivers in the country,” Crawford said.

And as much time as they spent fiddling with machinery and playing with the intake and manufacturing, they spent just as much or more time verifying their measurements.

“For most of these parameters, we’re getting to the point where we’re pretty confident the values that we see are real,” he said.