Florida estuary water too fresh for seagrass after historic rains 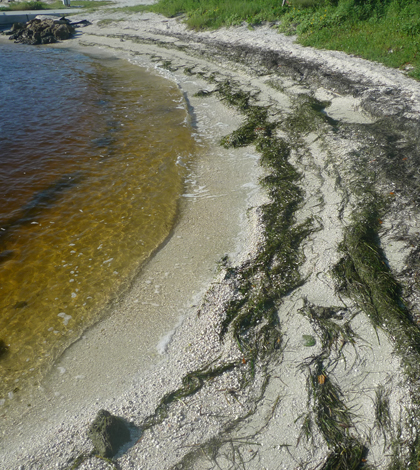 Seagrass leaves have washed up on beaches around the Caloosahatchee River Estuary (Credit: Sanibel-Captiva Conservation Foundation)

Record-setting rainfall in Florida this summer has sent high volumes of freshwater flowing through the state’s heavily engineered channels, locks and levees. Much of that water has ended up in the Caloosahatchee Estuary, driving down salinity levels and clouding the water to the detriment of the ecosystem’s seagrass.

The estuarine seagrass species have adapted to variations in salinity, but a summer’s worth of historic rainfall in the Caloosahatchee watershed and controlled releases from Lake Okeechobee into the river have suppressed satltiness beyond what the plants can handle.

The stressed plants are shedding their leaves, which are washing up in mats on resort beaches around Sanibel and Captiva Islands. Without leaves, the juvenile crabs and fish that shelter among the grasses lose their cover. Monitoring by Sanibel-Captiva Conservation Foundation scientists shows that up to three-quarters of the cover is provided by seagrass is gone.

“That’s habitat for thousands of creatures and hundreds of species,” said Eric Milbrandt, director of the foundation’s Marine Laboratory. “When you start losing that, it will take years–if ever–for it to come back into a functional, productive place.”

The Caloosahatchee Estuary regularly contends with elevated freshwater contributions from its tributary river during Florida’s summer rainy season. The river flows to the Gulf of Mexico from Lake Okeechobee, where water levels are controlled by a levee operated by the U.S. Army Corps of Engineers. To control floods, the Corps releases water from the lake into the St. Lucie River to the east and the Caloosahatchee to the west. Those freshwater flushes baffle marine seagrasses with artificially low salinity levels.

In the dry season, it’s the opposite. The Corps stores water in the lake to make sure there’s enough for urban and agricultural uses, diminishing the flows to the estuary. Salinity levels climb, baffling freshwater seagrasses.

“The big problem is the swings between the summer wet season and the winter dry season,” said AJ Martignette, a research assistant with the Marine Lab. “Grasses that would grow in one or the other can’t stay established there because it’s flip flopping each season.”

And this wet season has been a whopper, dropping more rain on some areas of the state than it’s seen since in any other season since record keeping began in the late 1800s. That’s led to more and greater releases from Lake Okeechobee, which combine with greater runoff from the Caloosahatchee watershed to drive salinity down across the estuary. A dark band of CDOM-stained water from Lake Okeechobee is visible flowing through the Caloosahatchee Estuary (Credit: Sanibel-Captiva Conservation Foundation)

The Sanibel-Captiva Conservation Foundation Marine Laboratory operates a seven-station water quality monitoring network that reaches from the mouth of the river out to the islands and sounds on the far edge of the estuary. The sensors near the mouth usually see the most dramatic effects of the freshwater inputs. This year, salinity levels at the station furthest from the mouth have consistently been the lowest ever recorded at the site since data collection began in 2007.

“Instead of the harm really being focused in the constricted part of the estuary, now we’re starting to affect broad distances on the coast,” Milbrandt said.

Salinity isn’t the only water quality problem brought on by the releases. Water from the lake also carries a tea-like stain from high levels of dissolved organic matter. This blocks sunlight from passing through the water, essentially shading out the seagrass.

Data from the lab’s River, Estuary and Costal Observing Network, or RECON, lets the conservation foundation’s scientists keep a close eye on salinity, colored dissolved organic matter and other parameters in real time. The timely data comes in handy during weekly conference calls with the Army Corps where the scientists have a chance to plead their case for why more or less water should be sent to the estuary from Lake Okeechobee. Milbrandt said the Corps plans to dial down the volume of the releases and better coordinate them with the amount of rainfall in the Caloosahatchee watershed.

“I’m not sure how many other places have the ability to talk to the people that have their hands on the valve,” Milbrandt said. “They’re hearing a lot of different things, and what we strive for is highly accurate information that we stand behind and that’s what RECON gives us.”