Flushing Protocol After Elk River Chemical Spill Not Based On Science 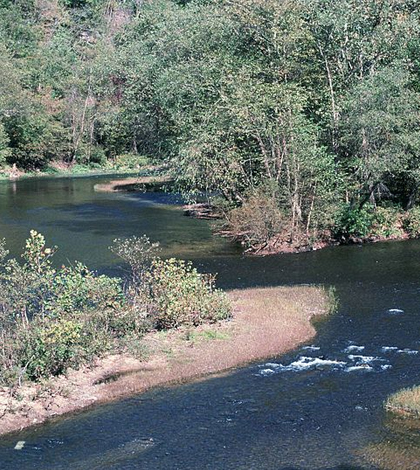 The Elk River was the site of a chemical spill in January 2014. (Credit: Stihler Craig / USFWS)

During the Elk River chemical spill that occurred near Charleston, West Virginia, on Jan. 9, 2014, over 300,000 people were without clean drinking water and over 150 cases of chemical exposure were reported. A Freedom Industries tank had become corroded and was leaking a toxic chemical compound known as crude MCHM into the river.

The Environmental Protection Agency issued a “do-not-use” policy and ordered homeowners to flush their systems, which lasted for five days until water was deemed safe to drink. However, that policy was not backed with scientific evidence or calculations, according to scientists at Purdue University.

When Dr. Andrew Whelton, assistant professor of civil, environmental, and ecological engineering at Purdue, first heard of the spill in the Elk River, his first response was to gather a team and travel to West Virginia. Once Whelton and his team arrived, they immediately began collecting water samples and data from 10 homes surrounding the Charleston area. Their objectives were to determine residents’ behaviors and perceptions of the safety of the water, measure the chemical levels in each home and determine how efficient the flushing protocol was at reducing those levels. The key was to get to the houses before they began flushing.

“Many people would start flushing; the evidence was being dissipated and washed away,” said Whelton. “So, we had a finite amount of time to collect evidence.” They found that larger water heaters and water-saving devices were not as efficiently flushed as smaller ones after the spill. In fact, because they have lower flow rates when operating, it takes several rounds of flushing to make the water they contain safe again.

From the research, Whelton and his team were able to determine that the EPA’s flushing guidance was not based on science. This, he said, is a common theme in most cases of water contamination across the country.

“This is not based on protecting public health. It’s grounded on personal opinion,” said Whelton. “Regardless of if you have a standard or legacy home, there’s a one-size-fits-all approach to decontamination guidance.”

The core of the issue is that the EPA was relying on Freedom Industries to tell them specifically what chemicals were in the product and what they should be testing for in the water. In this case, the company was dishonest and it did not come to light until Jan. 14 that the leaked product also contained a chemical known as PPH.

The findings suggest that, in the case of future incidents, science-based flushing protocols should be developed to prevent negative health impacts. And as part of the West Virginia Testing Assessment Project, Whelton is helping the state design such protocols.

Whelton believes the state has made good strides in preparing for future events and hopes to see other states follow suit.

“In the state, the public health agencies are very responsive. They understand what they know and don’t know about how to figure it out,” he said. “They don’t operate in a vacuum and they understand that the information provided by the federal government may not be the best solution.”

Top image: The Elk River was the site of a chemical spill in January 2014. (Credit: Stihler Craig / USFWS)