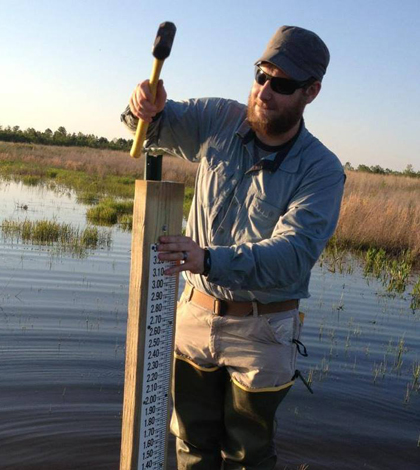 Researchers in Southern Indiana are trying to find the right place to reintroduce an endangered frog with a peculiar habitat preference. A groundwater monitoring project there benefits not just the frog, but also federal land managers and undergraduate students looking for real-word experience.

The crawfish frog, listed as endangered by Indiana and Iowa and near threatened by the IUCN Red List global conversation group, relies on crawfish burrows to hide from predators and can only live where the species coexist.

Scientists at Indiana State University want to introduce crawfish frog eggs in suitable habitats, especially in a few National Wildlife Refuges managed by the U.S. Fish and Wildlife Service, but they have to know conditions are right before they can plant the eggs.

Around a year ago, Brandon Root, a senior geology student at the University of Southern Indiana, enrolled in a hydrogeology course and was looking for a project. He talked to managers at the Patoka National Wildlife Refuge, who had just the thing for him.

“I had a few ideas in mind,” Root said. “But they said if you really want to help us, we’ve got this issue where we want to release these frog eggs.”

One area under consideration for the release was the Columbia Mine Preserve, a reclaimed coal mine owned by the Sycamore Land Trust that the Patoka refuge manages through a conservation easement. Previous research had shown that upland crawfish tend to burrow only where the water table lies within at least six feet of the land surface, but tight budgets made it difficult for the refuge to hire contractors to study the area and see if that was the case at the preserve.

Root took up the cause, securing an undergraduate research grant from University of Southern Indiana to cover the cost of well materials and pressure transducers. That would equip a long-term monitoring network to ensure that the water table was where it needed to be year-round.

But so far, that equipment hasn’t been necessary. He checked out the first site with a Giddings soil probe and found no trace of the water table six feet down, even just a yard away from standing water.

“It was dry as a bone,” Root said. “This coal mine spoil, we’re pulling it out of the Giddings probe and it’s just crumbing in your hand.” That ruled out the site as potential crawfish frog habitat, which saved the time, money and egg masses that would have been wasted on a failed reintroduction. There is still another site to test, which Root hopes will be a little wetter and warrant a long-term monitoring network.

In the meantime, Root has already gained exposure to the workings of government land management, a career path that he’s interested in. He’ll also present the research at the upcoming Geological Society of America meeting in Vancouver, British Columbia. It’s been a successful learning experience so far.

“It’s really great that I get the opportunity to go out there and experiment, play around a little bit,” Root said. “I’m using it as my outdoor classroom.”