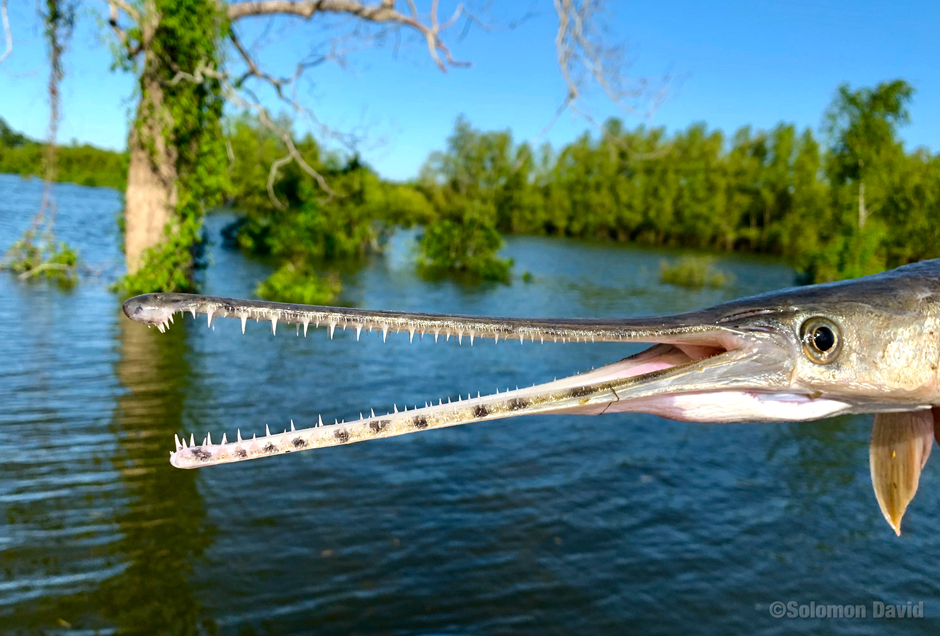 A longnose gar from the Mississippi River floodplain on the Louisiana-Mississippi border. (Courtesy: Solomon David)

Gar are a mean-looking fish, which along with their reputation as predators has earned them disregard and persecution for a long time.

But that’s starting to change and it’s about time, says Solomon David, who’s watching with hope as gar are increasingly valued for their role in their ecosystems and as sport fish.

“These attitudes are shifting, but there’s plenty of work to do,” said David, who is an assistant professor of biological sciences at Nicholls State University in Louisiana.

While understanding of gar’s scientific and recreational value is increasing, gar still face the harmful effects of old beliefs and new challenges.

The end of a history of persecution?

Like wolves and birds of prey, gar have been the focus of control or extermination campaigns because, in some cases, they eat economically valuable animals.

In the past, under the assumption that fewer gar meant more fish they’d like to catch, anglers and fisheries managers have sometimes tried to remove as many gar as possible. They used dynamite and electrocution and killed any gar caught while fishing for something else. For at least a few years in Iowa, it was illegal to return a gar to the water after it had been caught, biology professor Dennis Scarnecchia wrote in 1992.

But just like other predators, gar are increasingly appreciated as their role in maintaining ecosystem function is better understood.

“If you think of them like wolves in Yellowstone, they maintain balance,” David said. Within the ecosystem, gar keep prey fish populations in check, improving the overall health of prey fish in that area. When wolves were returned to Yellowstone, it’s likely that biodiversity increased. Gar eat what’s most plentiful, ensuring balance in the ecosystem.

And while some anglers are accepting gar’s important role in an ecosystem, others are turning to gar as a fish worth pursuing in its own right. Click To Tweet

Despite years of dismissal by many anglers, gars are good fighters when on the line and, when prepared right, good eating, David said.

At first glance, they don’t look particularly tasty. They take some special preparation, too. Anglers regularly use tin snips to get through their tough, scaly skin.

According to David, their growing reputation as good fighters has led to more anglers pursuing them for sport, not just to control their population. 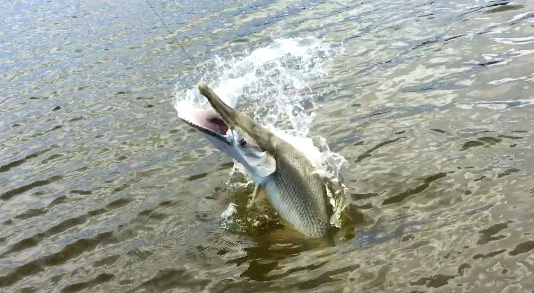 An alligator gar fights on a fishing line in Texas. (Courtesy: Solomon David)

This renewed interest is a return to an older way of viewing gar, not a new development, David said. Native Americans used gar skin for tools and weapons. And, because they’re regularly eaten in Mexico, Cuba, and Central America, many of the techniques used to raise gar in captivity were pioneered there and then borrowed by North American scientists when they turned their attention to the fish.

Science catches up to gar

Economically or recreationally valuable fish (which is often the same thing) get most of the conservation and research attention and funding. That leaves fish not targeted by recreational or commercial fishers out in the cold.

“That’s the conservation conundrum in a nutshell,” David said. Although gar have been studied for years, recently their contribution to science has been more widely appreciated.

David’s own research revealed growth rate adaptations in gar influenced by latitude. Those gar living at the northern parts of their range—in the vicinity of the Great Lakes—have much more rapid growth rates than their southern relatives. This is likely an adaptation to the shorter northern growing season, where fish have less time to bulk up before facing down lean winter months. What’s particularly interesting is that gar have remained mostly the same over millions of years. Still, in the 8,000 years or so since they’ve arrived in the northern portions of their range, they’ve significantly adapted their growth rate.

Besides insights into evolutionary biology, gar might provide answers for other areas of science as well. 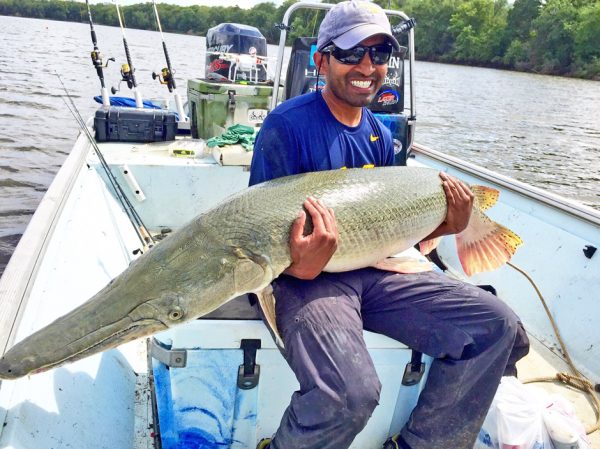 Spotted gar, one of the seven gar species, have been identified as a genetic bridge between zebrafish and humans. Zebrafish are often used in biomedical research, but their genetic differences from humans can make translating experimental results difficult or confusing. Because they have similarities to humans and zebrafish, spotted gar can help researchers choose the best zebrafish genes to compare to humans and make experiments in zebrafish even more relevant to humans.

Alligator gar, one of North America’s more southern species, can also serve as an indicator of ecosystem health. They prefer inundated river floodplains to reproduce. Finding alligator gar in all stages of life means the ecosystem is “doing at least alright,” David said. In that way, successful alligator gar reproduction can point to the success of certain restoration projects as well.

Although it’s no longer illegal to release a gar after catching it, there are still challenges facing them today.

Many states lack any regulation on the number of gar an angler can catch. Given the relative dearth of long-term research on gar, it’s hard to say how far below historical levels their populations are. Unregulated harvest could harm gar populations and in a few states they are considered threatened or endangered species. The range of alligator gar, for example, has been greatly reduced.

David is concerned about unregulated catch, such as bowfishing tournaments where participants shoot fish with bows and arrows, earning prizes for the biggest fish caught. Because the biggest gar are often reproducing females, tournaments could have a serious impact on gar populations. Not to mention, removing an ecosystem’s apex predators often comes at the cost of ecological imbalance.

Being fished recreationally can be good for a species. It brings research money and anglers are often effective conservationists. The same can happen for economically or scientifically useful fish, like spotted gar. If you can’t be charismatic, be valuable.

Still, for gar researchers and enthusiasts like David, it would be nice if they could be valued simply for being a unique part of aquatic biodiversity.

But in a world of limited research dollars and limited attention, it’s probably simpler to convince people that gar are economically, scientifically and recreationally valuable than intrinsically so as the weird, slimy, fierce-looking ancient fish they are.

Regardless of the reason, it seems gar are garnering more interest and respect, a fitting development for a respectable fish.