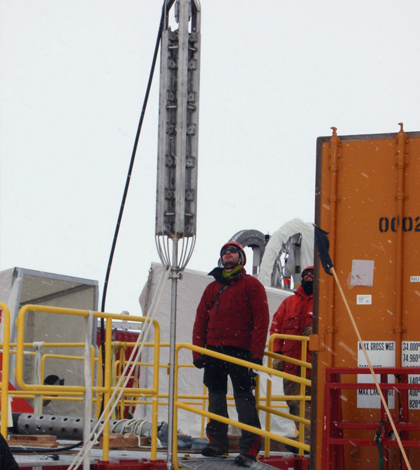 Moving the drilling equipment used to bore through half a mile of Antarctic ice required massive machinery and the majority of the three-month field season. (Credit: WISSARD)

On six of the Earth’s seven continents, sunlight provides the energy that supports terrestrial ecosystems and allows life as we know it to exist. But on Antarctica, the outlier of the bunch, sunlight is a scarce resource. Many of the processes that occur above and below the ice draw energy from the opposite direction — from within the Earth itself, in the form of geothermal heat.

A new study led by scientists at the University of California, Santa Cruz, shows that geothermal warming is occurring beneath the West Antarctic ice sheet in a greater capacity than previously thought. The study’s findings were detailed in a paper published July 10 in Science Advances.

Slawek Tulaczyk, professor of Earth sciences at UCSC and a coauthor on the study, says that subterranean warming, known also as geothermal heat flux, is an underappreciated geological mechanism, simply because its effects are hidden from view most of the time.

“Unless it results in some interesting phenomenon, whether it’s geysers or volcanoes or hot springs, we typically don’t think about geothermal flux because it’s not that important,” Tulaczyk said. “But on a continent that’s covered by an ice sheet where you basically don’t get any sunlight and haven’t had any sunlight for a long geologic while, geothermal flux becomes one of the primary sources of heat.”

Caused by the radioactive decay of the Earth’s interior, geothermal flux controls the release of water from below ice sheets on the Antarctic continent, and supports the microbial communities that live there. The heat may also contribute to the shifting size of the Antarctic ice sheet, as warmer areas melt the ice from below, lubricating the sheets and pushing ice toward the coast.

The study produced the first geothermal flux measurement ever made beneath the West Antarctic ice sheet, and was conducted over three field seasons on the continent. Funded by the National Science Foundation, the study was part of a large interdisciplinary effort known as the Whillans Ice Stream Subglacial Access Research Drilling project and also included microbiology and geology components.

It was the collaboration between disciplines that made the project possible, Tulaczyk said, as he was inspired by his UCSC colleague and coauthor, Andrew Fisher, who had spent decades developing similar measurements in the deep ocean.

“People have drilled before to the bottom of the ice sheet, but no one has collaborated with someone who has experience doing geothermal measurements in sediments beneath water or ice the way that we did,” Tulaczyk said. “It’s kind of another illustration of the power of collaboration and finding synergies between scientific fields.”

Measuring geothermal flux beneath the ice sheet required cooperation between dozens of researchers and support personnel, and as with all similar work on the continent, the project was constrained by relatively short field seasons and the logistics of moving massive drilling equipment across more than 500 miles of ice.

Tulaczyk said that Antarctica is only warm enough for people to work away from the permanent research stations between early November and the end of January. Due to the time limitations, field work on the continent can be “quite hectic,” he said.

“By the time the drilling equipment gets traversed to the place where we want to drill, it’s already early January,” Tulaczyk said. “We have to fly all the science personnel and the logistical support people to that site and build the little tent city where everyone can live, with a large tent for cooking and getting together.”

The lengthy preparation stage leaves only a couple of weeks for the drilling and in-field scientific work, before the season ends and all the equipment has to be broken down and moved back toward the coast.

Weather can indefinitely hamper the process, and Tulaczyk said that just getting to the continent usually requires plenty of waiting for an ideal window in which the researchers can catch a ride aboard one of the Air National Guard’s Hercules planes, or with a private Canadian airline that “has experience landing small planes in the middle of nowhere.”

“Once we get to the field, it’s kind of just sleeping and eating whenever everyone can, and then working all the time just to take advantage of the opportunity that we’ve waited so long for,” Tulaczyk said.

While things can be hectic in the field, Tulaczyk says that the researchers are experienced and comfortable working in Antarctica, and most of the complications arise from external sources — in one case, political bickering that occurred thousands of miles away.

“One of our seasons got canceled because of the sequester and government shutdown debacle in Congress,” he said. “That was kind of a deflating experience, certainly. Over there we know what we’re doing and everybody else does, too, so as far as operation in Antarctica, everything went pretty smoothly.”

While the researchers acknowledge that they can’t be sure if the high geothermal flux measurements are localized, or might be found elsewhere on the continent, Tulaczyk noted that the team has conducted a second measurement at a location 60 miles from the original borehole. They’ll be publishing the results of that measurement in the near future.

Additionally, there are plans in the works to further study life in the extreme environment beneath the ice sheet.

Tulaczyk emphasized that although the project takes a lot of careful work on the part of scientists like himself, it’s also dependent on a host of people whose names don’t end up in scientific journals.

“Success, with a project like this, can only happen when you have not just scientists doing the right thing, but also dozens, if not hundreds of support people,” he said. “It’s really, I think, a very impressive operation that maybe Americans should know more about than they do, and should be proud that this country has an amazing capability to do scientific research on a tough continent like Antarctica.”

Top image: Moving the drilling equipment used to bore through half a mile of Antarctic ice required massive machinery and the majority of the three-month field season. (Credit: WISSARD)